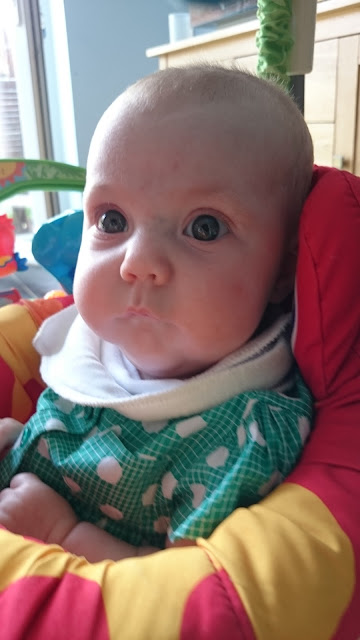 Wow, I can't believe I'm writing a 16 week update. Madness, where have the last four months gone?! Elarna will be 4 months on the 15th of this month (also our 5th wedding anniversary, nawww!). I think she's made some huge developments in the last few weeks and she's also growing in length, finally bless her! When the Health Visitor measured her length she commented that she was quite a short baby (cheers, haha). To be fair myself and my husband are not exactly blessed in the height department so it's taken a little while for her to lengthen. We have been using the jumperoo (aka the saviour for parents) as a guide. Originally she needed cushions underneath to be able to use it  but now she is just long enough to bounce successfully, wahoo! 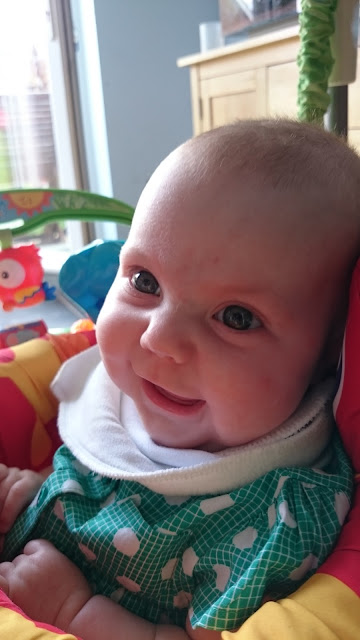 She continues to be such a smiley little baby and she's starting to giggle which in all honesty I forgot just how adorable baby giggles are. She does have her moments of whinging which is usually at the point us sitting down to eat! That's ok though, the smiles immediately make us forget! She has started to be alot more vocal and makes the most bizarre little squealy/screechy noises and has started to blow raspberries and make lots of maaaamaaaa sounds.

She has also now cracked the art of rolling over onto her tummy, she's been trying to do it for ages and getting ever so frustrated with herself when she can't get her arm out from underneath but within the space of 24 hours managed it with no problems! She hasn't quite got full neck strength to keep her head up for long periods of time once on her tummy so quite often I find that's she face planted into the floor, poor little thing! Comparing this to Alfie she has rolled over very quickly, I checked in Alfie's milestone book and he was 21 weeks before he could do that so I guess it's perhaps true what they say in that girls develop slightly quicker than boys? 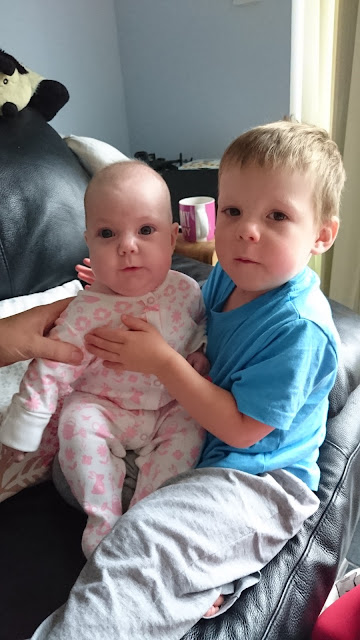 Alfie continues to be so wonderful with her. He's so caring and most of the time very gentle. Just this evening he ran into the room as I was feeding her because he wanted to give her a cuddle and a kiss on the head. Sometimes if she's crying he'll shout 'Elarna STOP crying' and then he'll try and make her stop either by putting her dummy in or trying to amuse her. It's very sweet to watch, I really think he's adjusted quite well (thankfully). 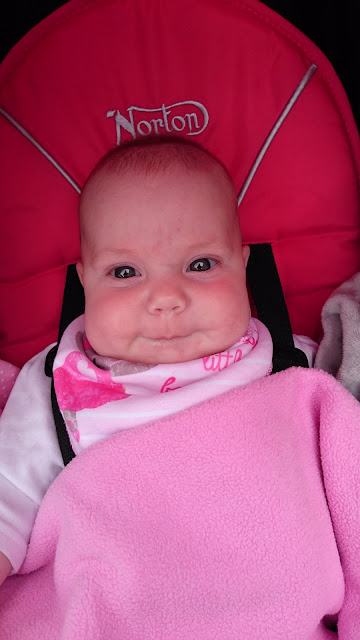 She is continuing to sleep pretty well. A couple of weeks ago, however she caught a horrendous cold, she was snuffly, bunged up, hoarse and developed a nasty, nasty cough. I was up with her alot in the night during that week, one night was 8 times, it was pretty horrendous to be fair. With a bit of calpol, some snufflebabe and her dummy she would generally nod back off, wasn't nice seeing her like that. While she was ill her skin suddenly became quite dry, quite annoying as her skin and Alfie's when he was her age was always good. I decided to use the Earth Friendly Baby products that I'd kindly been sent by Lansinoh to see if they would help. Designed for babies sensitive skin, with no parabens or artificial fragrances and with naturally sourced ingredients I'm pleased to say her skin cleared up after a couple of uses. They also smell lovely but not overpowering. 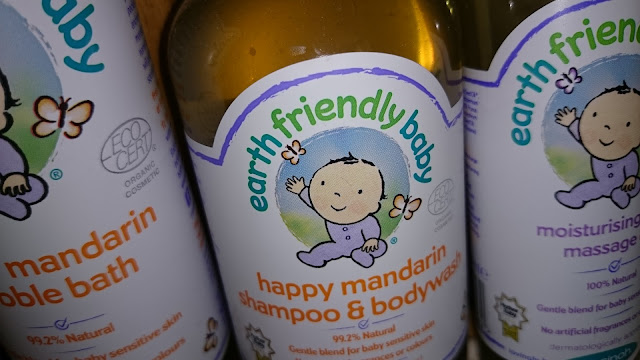 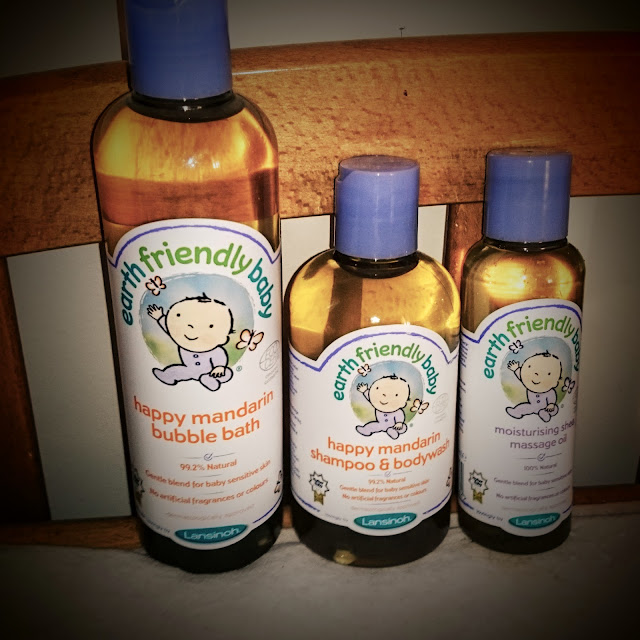 She's a very snuggly baby and loves cuddles, she also like to be held upright. Put her lying down and she wails until she's put back upright, I think that's why she likes her jumperoo so much! She's still managing to get into 0-3 clothes, I'm trying to get as much use out of them as I can, as I mentioned earlier her legs are still quite short but you definitely see a difference when I put her in leggings now, some of the first size are looking a little small on her. We have her third lot of jabs this week, I'm hoping she'll be ok, both times afterwards she's been quite grizzly for around 48 hours but she's a tough little cookie and doesn't seem to make a massive fuss, just wants a few more cuddles and I'm happy to oblige! 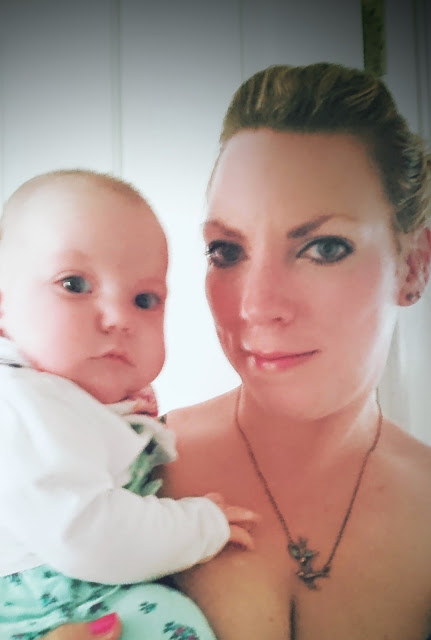 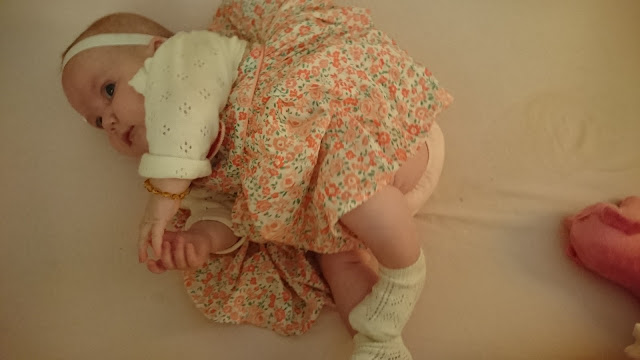 I'll leave it there for now, I'm keeping my fingers crossed that we get some nice weather and less rain as I'm dying to get out walking with her a bit more. It's been so hit miss since we've been back from holiday I never know if I leave the house whether I'll return soaking wet due to an impromptu shower! If you fancy reading the previous update please click here, if not hopefully you'll be back to read the next update.

Posted by Helen - Blogging Beautifully at 7:30 am