Yes you are reading this right, I have let my hubby loose to write a review. He didn't take a huge amount of convincing once he knew beer was involved!! Check out his review of BrewBarrel and give him a bit of love (please else I'll never hear the end of it!)

When I was first asked by the wife if I wanted to write a post, I have to say, initially I was a bit apprehensive as I usually have a long list of incredibly important things (or pointless if you ask Helen) to fill my evening, hence my initial answer was “hmm naa – too busy”….
Helen: “but there will be beer in it for you”.
Me: “Hmm sounds interesting, what do you mean”
Helen: “I've been asked if you want to review a homebrew kit”

Well that instantly changed my mind, tell me more... People who know me, know I've become quite partial to home brewing over the past few years, mainly around occasions like summer get together or Christmas time. I was first introduced into home brewing with an all-in-one kit bought as a birthday present by the in-laws, which as a first attempt gave good results, so I soon got hooked and advanced onto the multi-tin beginner kits, buying barrels, bottling and now have progressed onto mashing the malts, mixing the hops, boiling the wort and so on (or stinking the kitchen out and making a mess – as Helen describes it). I suppose my point is its far more involved than when I use kits and generally involves bit of knowledge, research and some planning ahead, so finding a kit which provides decent results can be a real winner, as it can take away the complexity (and mess) of the brew but still provide a very drinkable product at the end of it – I have to be honest some kits just don't cut it, the flavours can be dull, generic and boring.

The beer - the kit is produced by BrewBarrel - http://www.brewbarrel.co.uk/ - looking through the website they have various as customisable beer kits, where you can select everything from your malts, hops and extra flavourings. However, I was impressed with their recommended and pre-selected recipe kits, there is a large choice from Ale to Pilsner to flavoured beers to European styles – they seem to have covered most avenues, so being quite partial to German and Belgium style beers I decided to try the Oktoberfest style barrel. 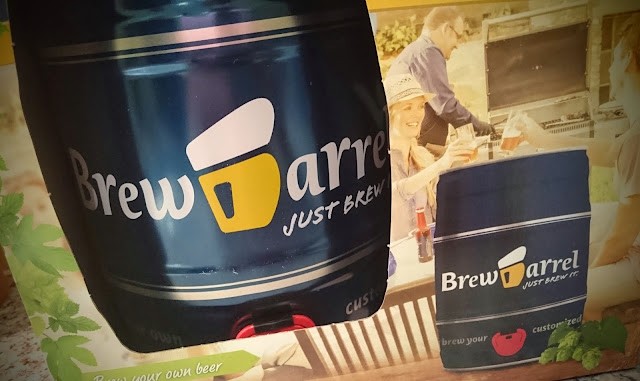 First impressions - As with all areas of life, first impressions are important and I have to say this kit didn't disappoint. It was contained in premium looking packaging, so great gift option and the contents all had the same premium look and feel to them. A lovely aluminium keg (which I'll keep and reuse assuming I can clean and sterilise it), all the ingredients including malt extract, hop extract, yeast and flavourings and some simple easy to follow instructions. To be honest the idea around these Brewbarrel kits seems to be simplicity and to remove apparent complexity of the brew, which great particularly if you are homebrew novice. I remember my first ever brew with all the various thoughts, like “am I going to poison myself”, “is it going to taste like vinegar”, “is it going to blow my head off or kill my liver”. Luckily for me, my introductory kit was also simple and none of the above happened. 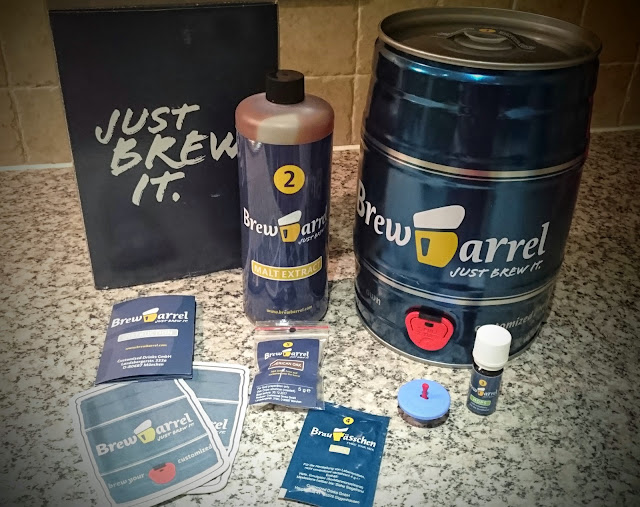 Onto the brew – I won't go through a step-by-step illustration of what I did as the instructions are pretty inclusive and self explanatory. I did find it simple, very easy to follow and there wasn't tons of reading to do beforehand. BrewBarrel reckons it can take 10mins to prepare your barrel, I would say that is accurate and I completed it within that time with little to no mess, which is fantastically quick considering a partial mash can take me a few hours and a lot of mess (I have mentioned Helen loves that part of brewing season). A couple of minor tips, would be to take time to pour the malt extract and don't be tempted squeeze the bottle into the keg to speed up the process, you'll end up with a sticky malty mess on top of your keg, just let it pour out. If you have shaky hand you could consider a funnel but personally I'd avoid the temptation as you'll probably be there until next year because of the viscosity of the malt, just pour it slowly from the bottle provided (however I did use a funnel for the water). 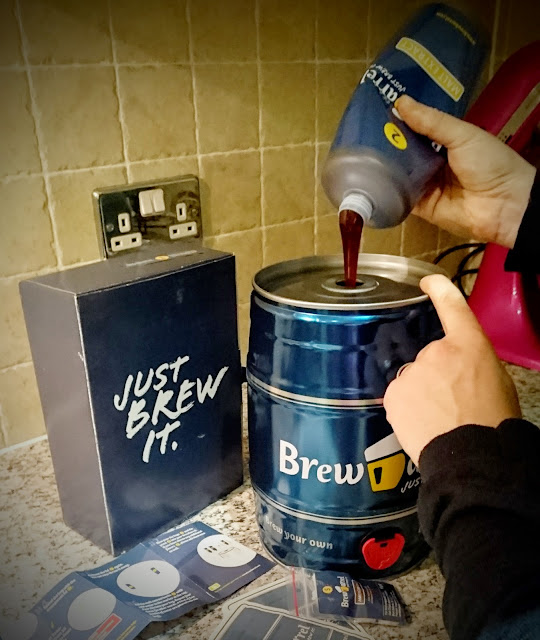 Once complete, it was ferment time – BrewBarrel reckon its ready to drink just after 7 days, this again is quick, although the actual ferment time stated is similar to most brews (5 days or so), normally I'd then have to transfer my brew from the fermenter into a barrel/bottles and do a second conditioning ferment to provide the carbonation and let it condition and settle for maybe 2 or more weeks, personally I prefer to leave my beer to condition that little bit longer, particularly to give it a little more time to clear and flavours mellow. So the 7 day brew-to-drink is quick in my mind – BrewBarrel also only actually recommend a maximum of 2 weeks before it should be opened and drank – so not huge shelf life but great for shorter notice BBQ's and parties. Although I wanted to test the 7 day claim, I actually ended up opening mine 12 days following brew day.

End product – Considering I'm now more used to freshness of mash brews – I have to say I was impressed with the outcome of this brew. It was clear considering the short brew length, it a had nice amber hue and pretty good head. The sediment had settled nicely (something I was a little wary of as described above). 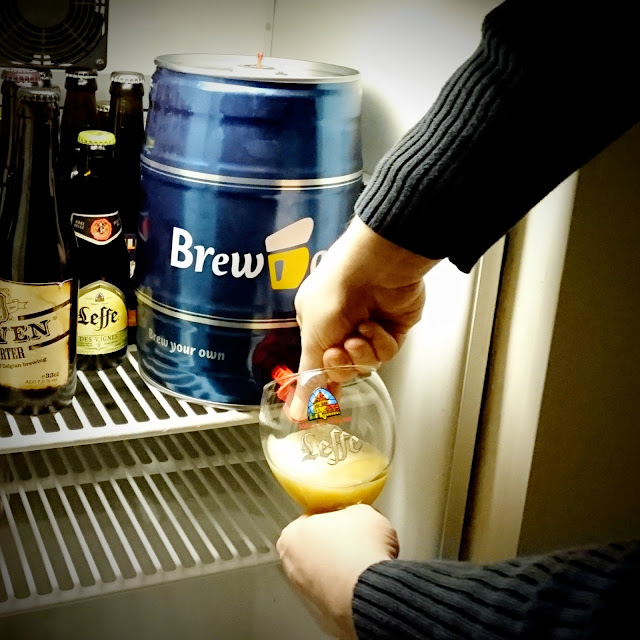 With keg conditioned beers don't be tempted to move the barrel around, little/very gentle to no movement before drinking is best, otherwise you'll end up disturbing the yeast sediment and result in a cloudy pint (it will still taste ok but just be cloudy – also your first glass maybe cloudy too even when rested). Instruction state to put it in the fridge, we're now lucky and I have beer fridge (wine if you ask Helen) which it could be fitted it upright, but refrigeration of these barrels becomes difficult because if you lay it on it's side in the fridge and turn upright before drinking it'll disturb the yeast.

But back to the beer, on the nose I could definitely pick-up the caramels from the malts and the floral tones from the hops – certainly reminiscent of a German style beer. The taste was fresh, probably more so than other kits I’ve tried, definitely picked up the hint of the oak from the “extra flavours” option which I put in the keg. I found it easy to drink and enjoyable, though perhaps a little hoppier than I like it but that’s personal preference as I prefer maltier rather than hoppier beers – I could reduce the amount of hop extract I put in the keg but for this attempt I wanted to follow the instructions. 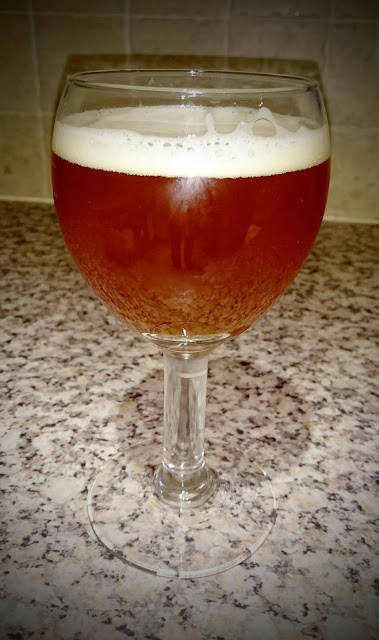 Verdict – I certainly wasn't disappointed, it provided a nice tasting beer which I could very happily drink and was thoroughly satisfied. The simplicity was one of it star features, fantastic for a homebrew novice and also good for seasoned brewer who just wants to run up a quick homebrew for a party. Quite honestly there aren't many negatives but if asked for one it would be the price point, they aren't necessarily cheap – the Oktoberfest is priced at £29, a 5 litre barrel will probably provide approximately 8.5 pints – which places the contents at over £3 per pint (yes more expensive than traditional homebrewing but benefit of zero complexity and no need to purchase specialist kit). That said brewing your own beer is fun, can provide talking point at parties and summer BBQ's, plus gives satisfaction and pride (man points) of drinking something you've made with good results, so I do actually think it's worth it, considering it's still cheaper than most pubs. As the in-laws did with me, it would provide a fun present particularly in the run up to Christmas and based on the instruction times it could just about be ready for new year (wives beware though you may lose your kitchen as a brewery down the line). 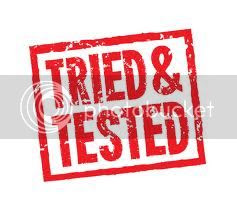