A Moment of Panic.

We had an absolutely great day out on Sunday to Dinosaur Adventure in Lenwade, Norfolk (review to come soon!). It was a fun filled, busy day with lots to do and see for kids and parents alike. Amongst all the dinosaurs and small animals were tons of play areas filled with climbing frames, swings and Jurassic themed equipment. Truly brilliant.

One of the awesome pieces of equipment that Alfie went on again and again was a giant dinosaur with a slide at either end, entered via steps in the middle. Inside were various ramps to play on before sliding down the tail or out of his mouth. It was great, but pretty big and to see each of the slides that your child comes down on is quite tricky.

Alfie wanted to go on it for about the third time in the day and raced on over while Daddy dutifully followed behind. I was pushing the pram and taking a few snaps so was ambling over in my own time. As I was taking a few pics and just generally taking my time to get over my husband started doing this wild (almost crazy man) gesticulating action at me. Clearly I had no clue what he was trying to tell me so started to hurry over, my initial feeling was christ, has Alfie hurt himself. 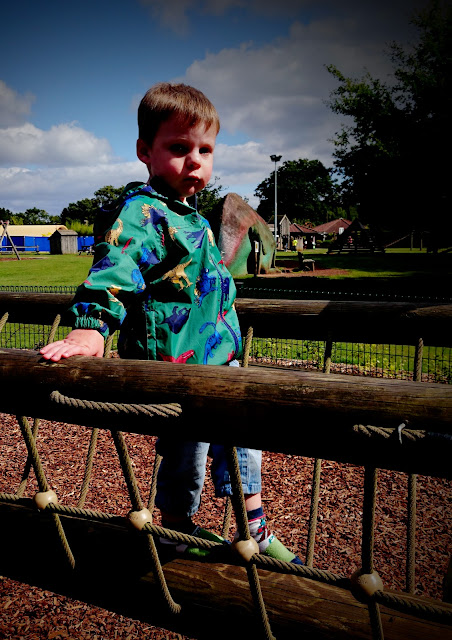 My Mum once told me a story of how I once went missing in Egypt, I don't fully know the details but I think I just got carried away into the crowd but I always remember her telling me of the sheer panic that she felt that day. I think I felt close to that on Sunday, my heart literally leapt into my mouth and my heart was thumping, I knew deep down that realistically he couldn't have gone far but irrationally thoughts of him being kidnapped did come into my head. It's such an awful thing to think but in this day and age you never know who you are standing next to, chatting to or walking by. The sheer relief that washed over me as I saw my husband running over to him was immense.

After giving him a cuddle and telling him that he needs to stay close to Mummy and Daddy (we could hardly tell him off in his eyes he hadn't done anything wrong), we carried on our day just being more vigilant, but yet not over the top because we still like him to have his independence.

It was just one of those horrible moments, made worse by the fact that for the rest of the day we were then analysing our parenting and if we had gone wrong somewhere? Crazy really. In hindsight we did nothing wrong it's just we were in different places and Alfie is just quick, and I really do mean that he's quick he can cover a football pitch in lightning speed! I am surprised that he didn't stop to see where we were as he's normally quite good as staying close but I think he just got over excited.

Anyway, all's well that ends well and that's the main thing, it didn't spoil the day but I think it made me somewhat more aware and that I clearly need to invent actual eyes in the back of my head for instances like this!

Please tell me that I'm not the only one who has had this happen before? It's certainly not an occasion I fancy repeating, that's for sure.