We are loving the giddy bowl in this household.

How many times have you given your toddler a plate full of snacks for them to take to the table or sofa and you end following them picking bits of raisin or bread stick up from the floor. Alfie is such an independent chap that he always insists on carrying his own plate so when we were introduced to giddy bowl and asked if we'd like to try one out by Alex from Lamb and Bear I was intrigued and so was Alfie.

On arrival my husband, being a Physicist had to have a play around and he was impressed at just how the bowl did stay upright with fluid in it and he was very confident that Alfie was going to enjoy using it, men and any sort of gadget eh! 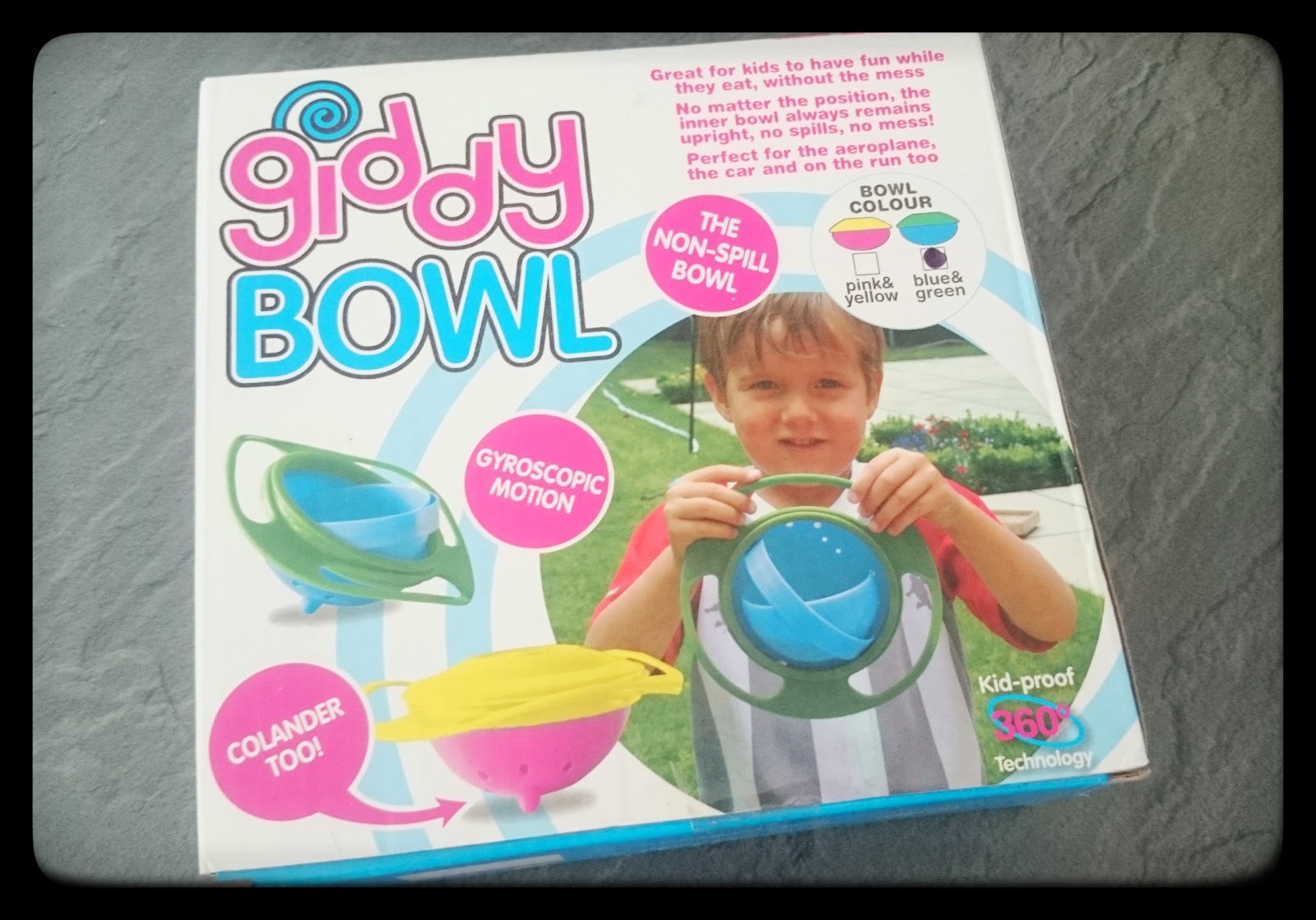 The giddy bowl is a clever solution to preventing spills and mess while providing a fun and rather ingenious idea while the child eats. Using a gyroscopic design, originally used for aeroplanes and boats this bowl cleverly keeps the inner bowl upright regardless of the position. Hold it upside down and the bowl stays upright, hold it to the side and tah dah the bowl stays upright, amazing! Obviously if thrown across a room spillages will occur but for general toddler eating activities this is one cool design. 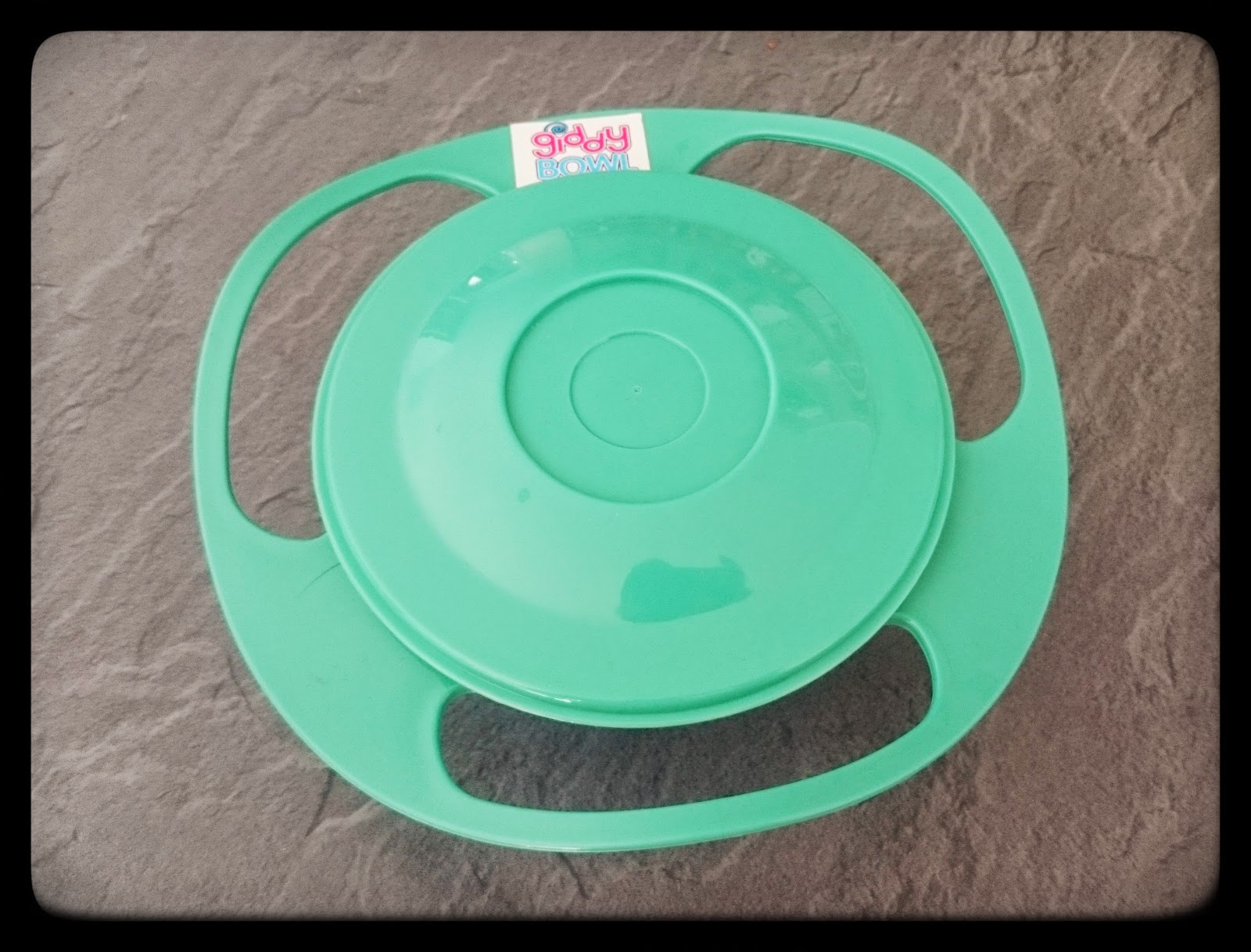 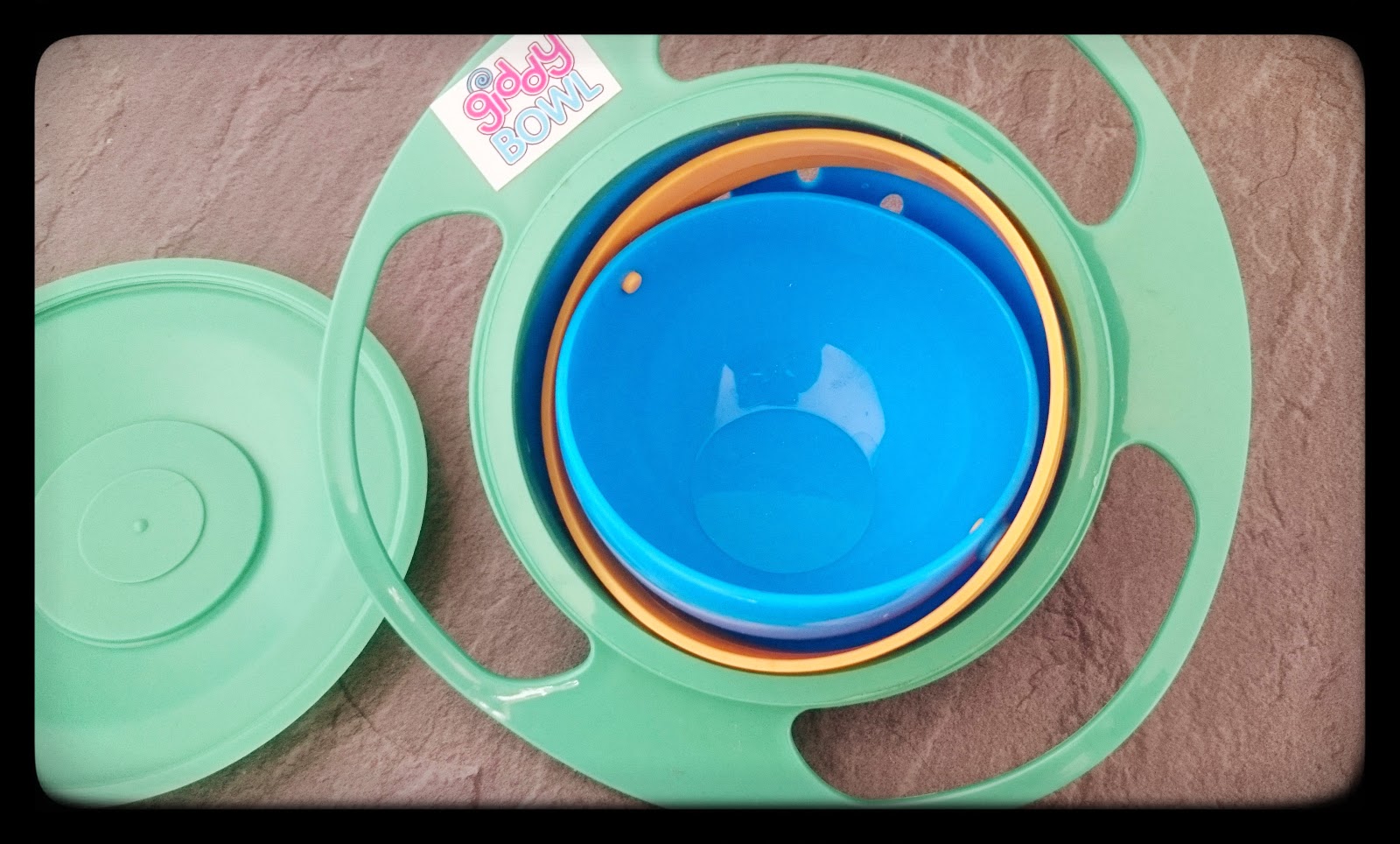 As you can see from the pictures there are three decent sized handles for little toddler hands to grip and hold on to ensuring that it's stable and easy to maintain grip. There is an easy snap lid enabling the giddy bowl to taken on car journeys, bike rides etc with no risk of spillage, we have found it really handy to store snacks in for later too. The giddy bowl also doubles up as a colander, we have yet to make use of this feature but I like it never the less. 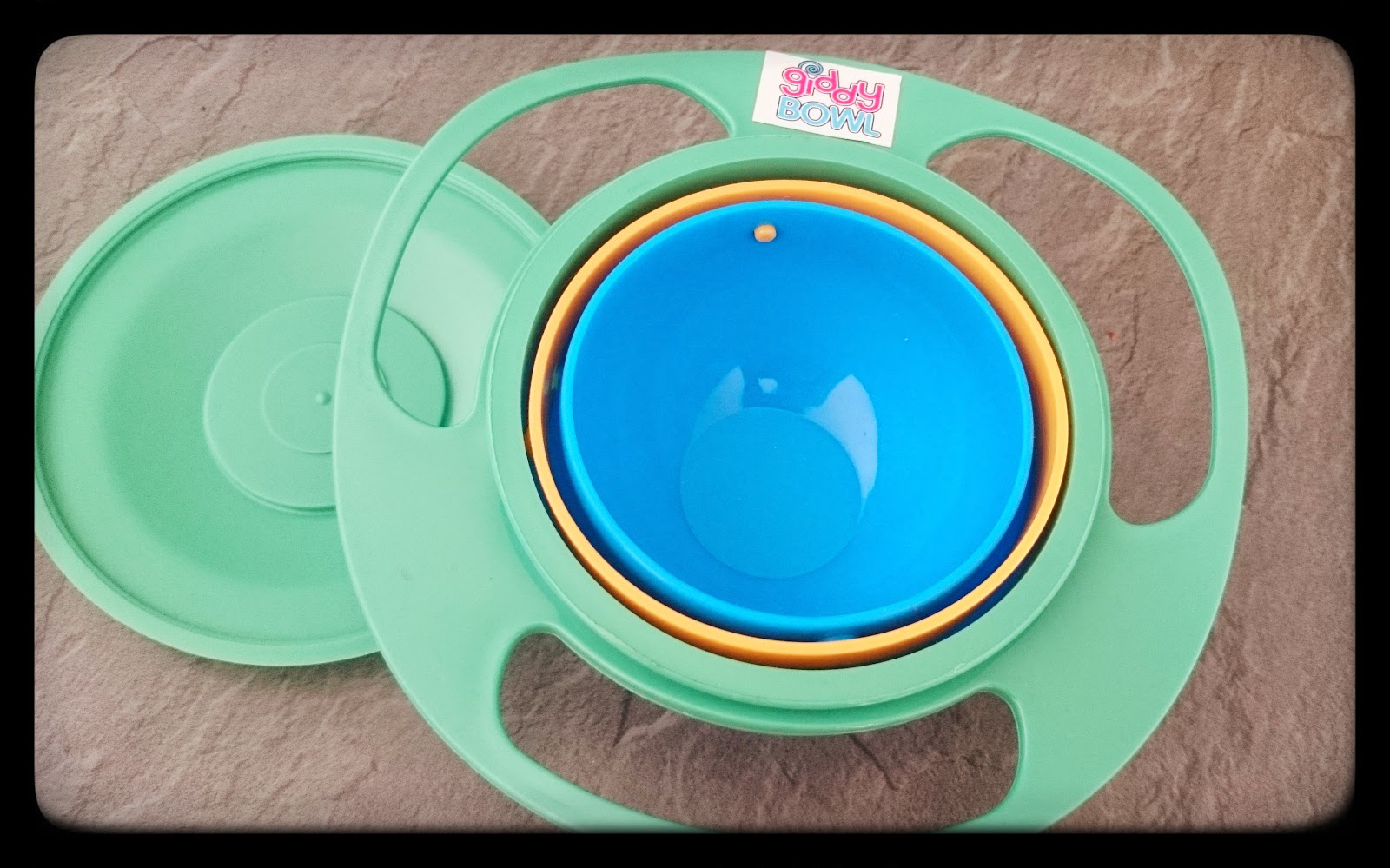 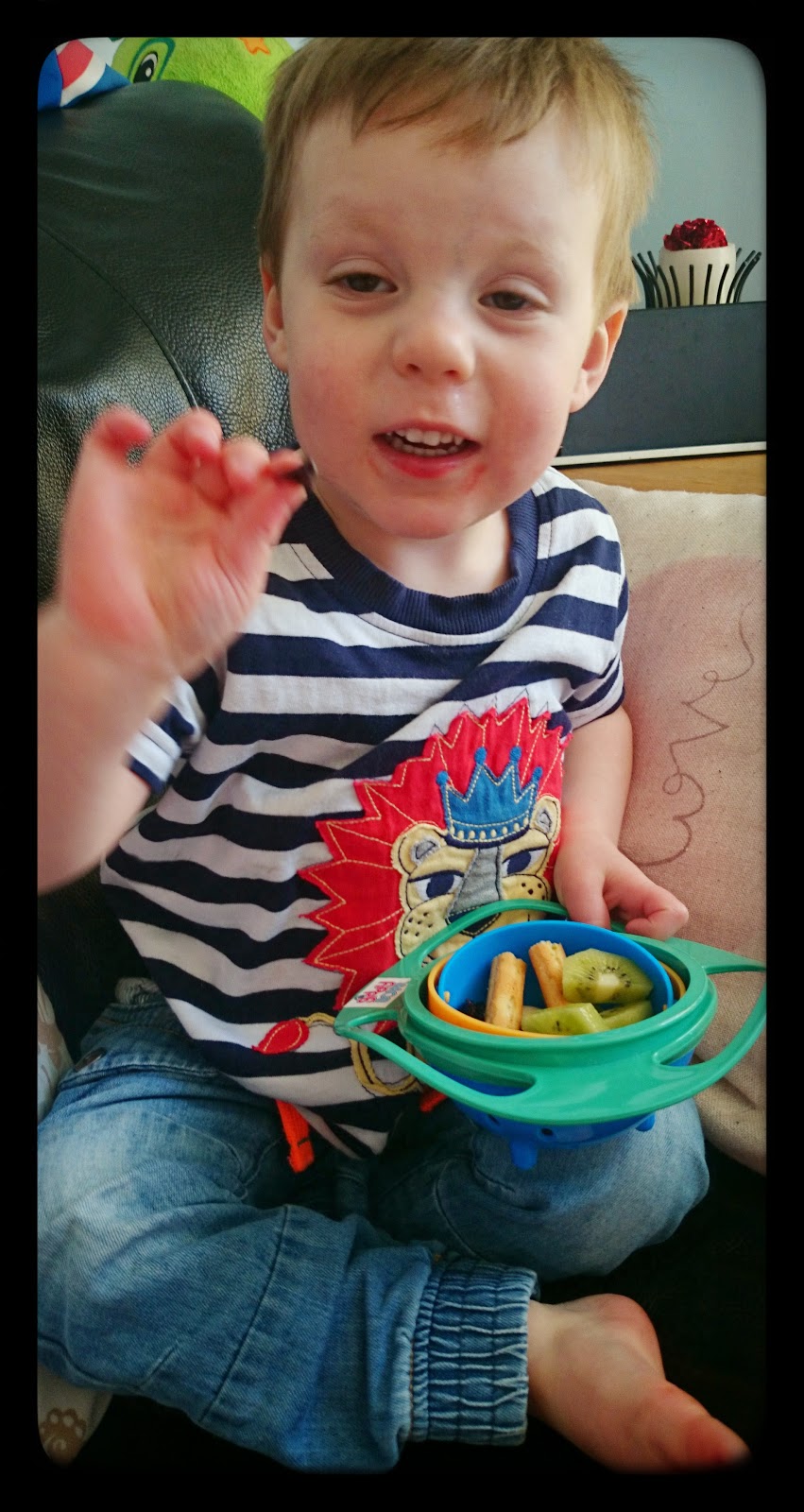 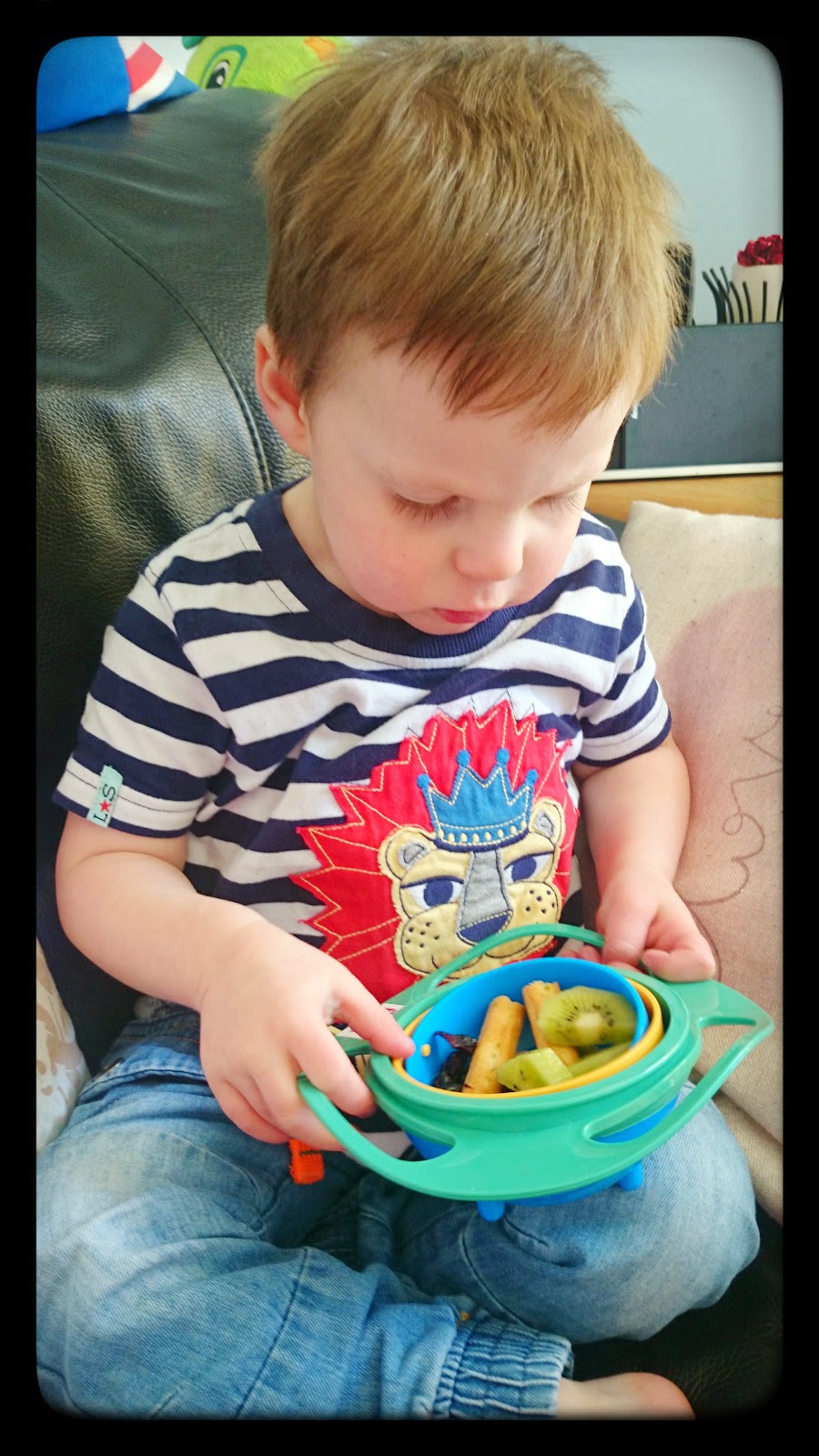 I took a whole load of pictures of Alfie enjoying his snacks from the bowl, he thought the whole thing was great as you can see from the picture below with his bizarre, manic grinning (if you can call it that) face. The size of the inner bowl is really generous too so there is plenty of room for a variety of sized snacks, although I did have to bread the bread stick up slightly for it to fit in.

The giddy bowl is also made from food safe plastic and is dishwasher safe, winner!! Everything and anything go in my dishwasher, the less I have to wash up the better!  As mentioned above the giddy bowl does come with a lid so any snacks that are left over can be saved until later. 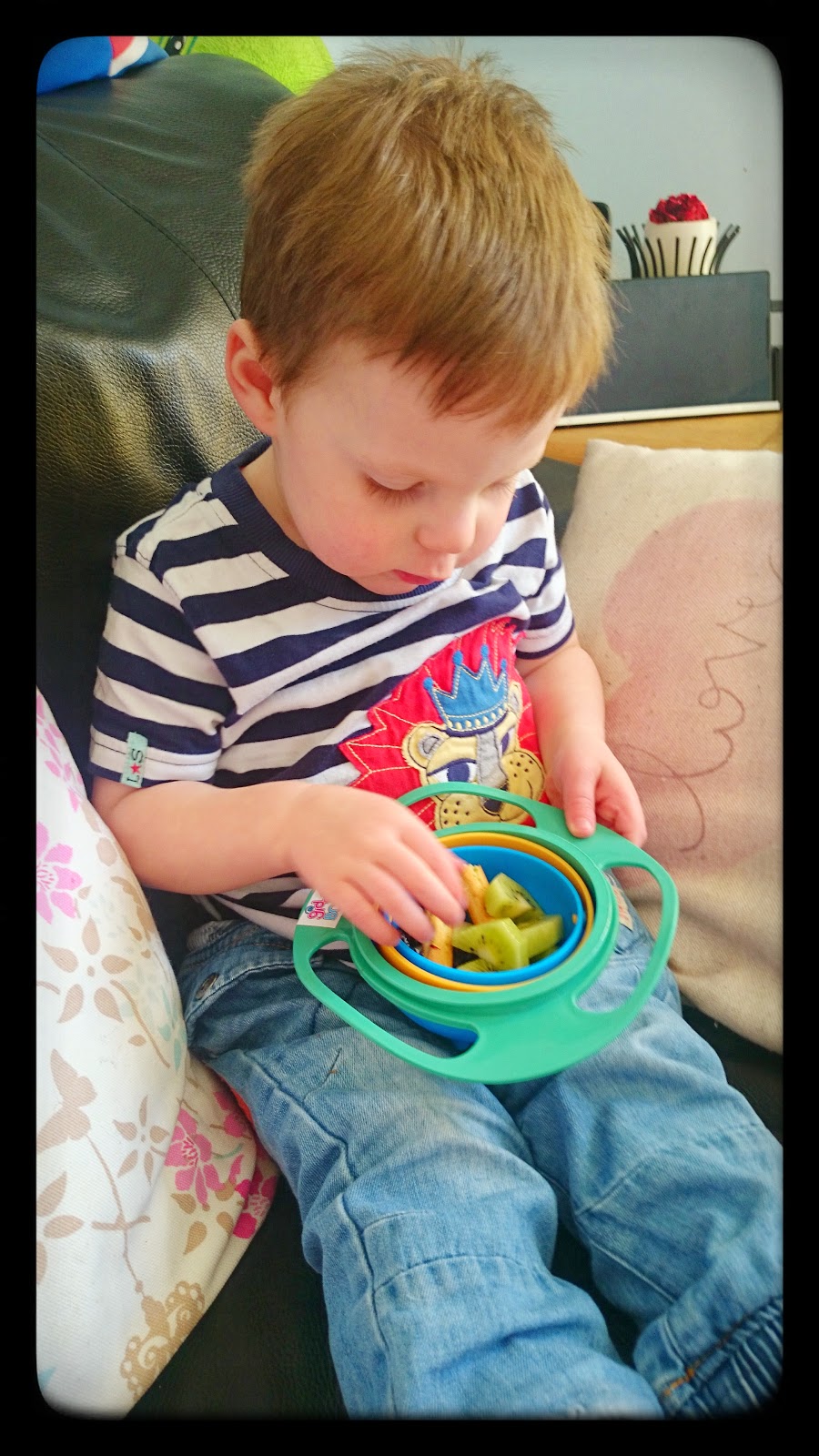 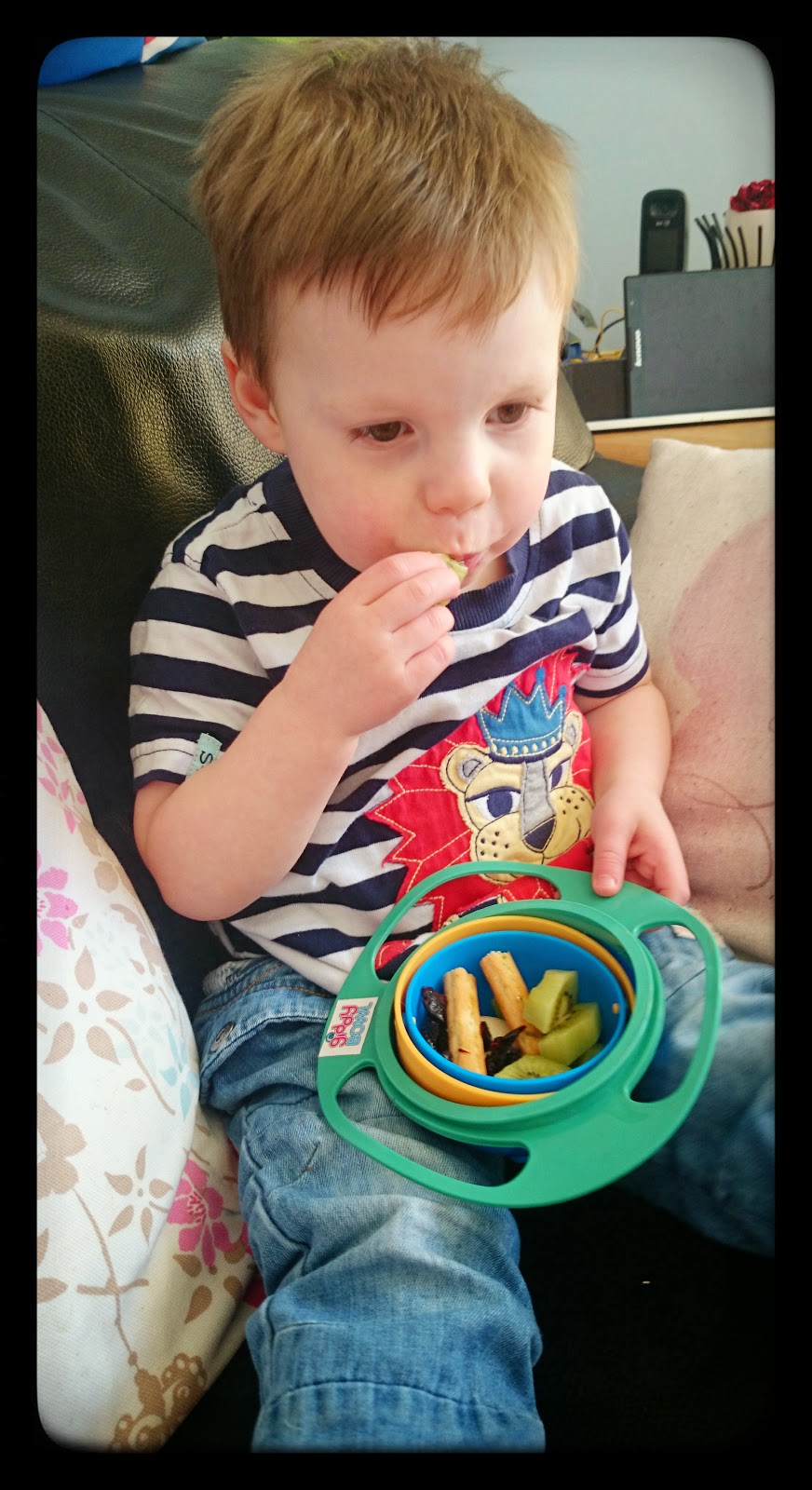 The giddy bowl is a fairly new product that is currently only available online through Gr8 Solution and retails for a very reasonable £9.99. There are two colours to choose from at the moment, I think it would be nice if there were more options but for the moment the two colours which are blue/green or pink/yellow are great.

I am always into supporting new and innovative ideas and smaller companies so I really hope that giddy bowl takes off for the designer as I think it's a great and ingenious idea and when my little girl arrives I will most definitely be purchasing another one for her. 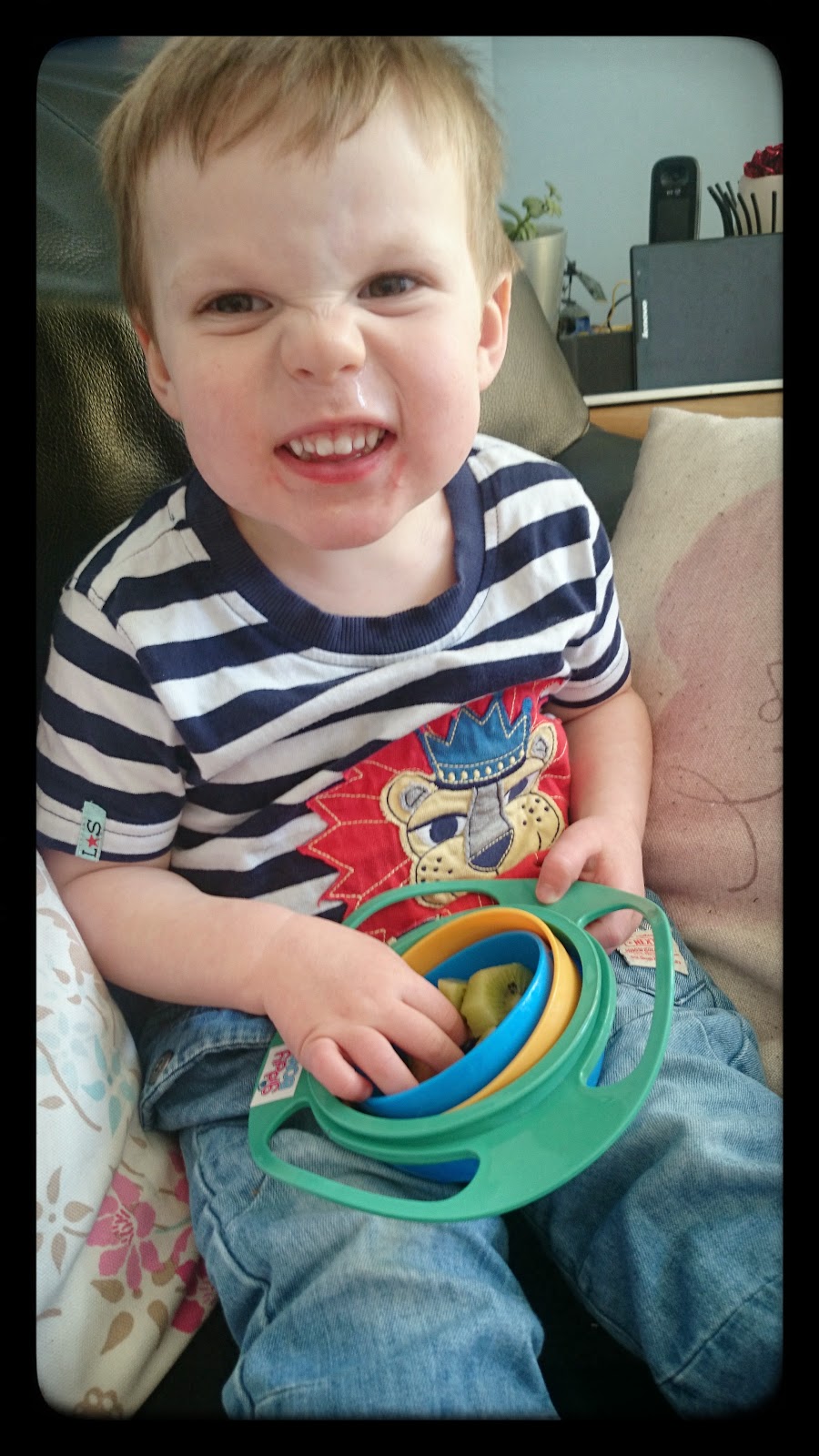 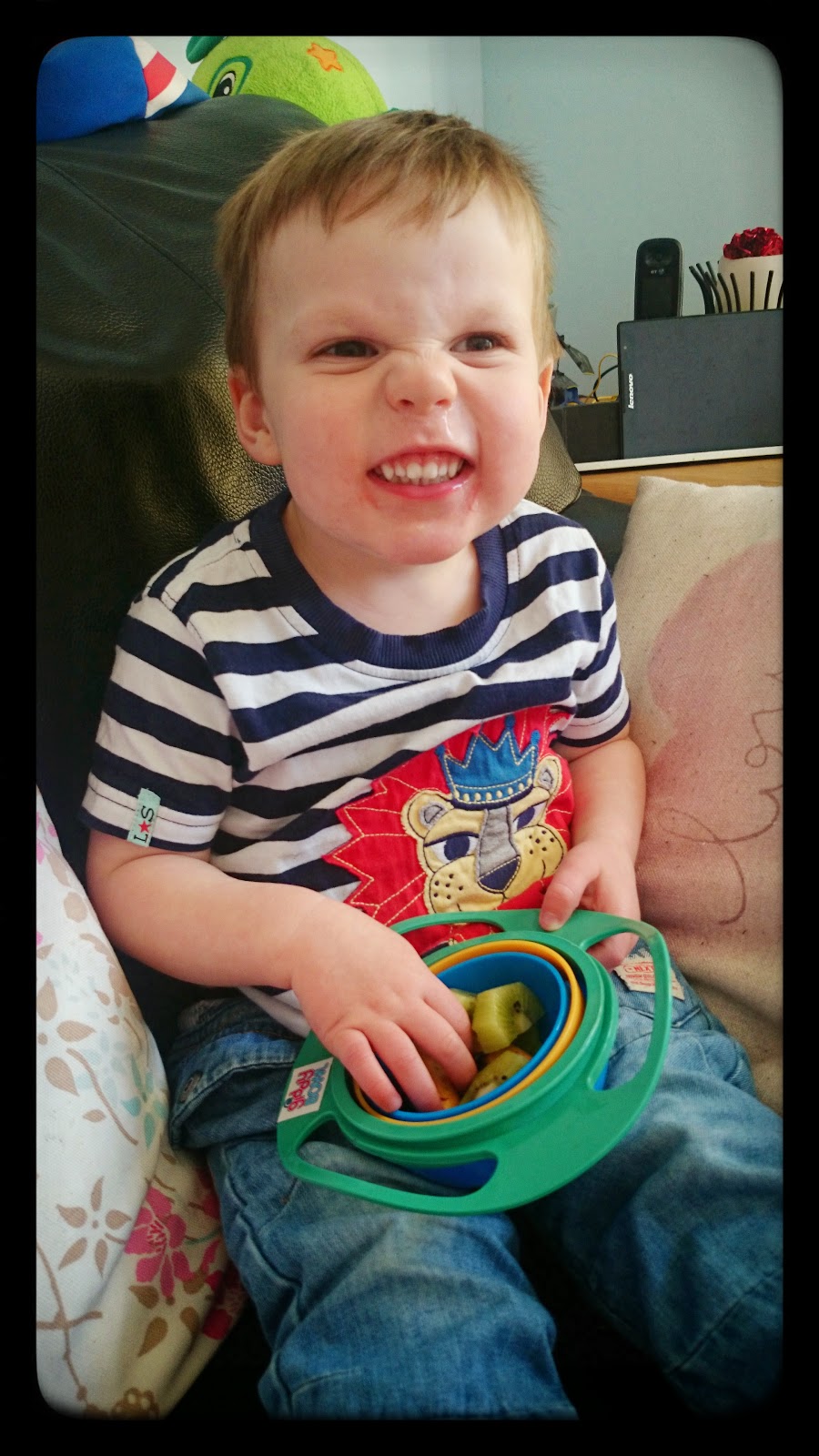 Thanks again to Lamb and Bear for introducing us to giddy bowl, it's definitely found its place in our household and I'll be telling friends about the bowl if they have a toddler similar to mine!

Have you heard of giddy bowl? Would you be interested in trying it for a spill free solution?

* Please note I was very kindly sent the bowl free of charge in exchange for an honest review, all the views and opinions are that of my own and I can truly say we do love the giddy bowl alot!