It has been well over two months since we moved Alfie from his cot and into his new room, I wanted to wait a while before I wrote this post so I could share my experience's and tips. As with potty training I confess I was putting the 'big move' and transition off, after speaking to our local Health Visitor a while ago she suggested waiting until we had potty training cracked before attempting to move Alfie from cot to bed and I think she was right, she also suggested that if he was making no attempt to climb out of his cot not to rush things so I'm glad we waited a little longer before moving him.

When finding out I was pregnant it was inevitable that we would have to move him at some point and we toyed with the idea of keeping him in the room he was in but realised it make no sense as that was still decorated as the nursery and would require minimum work to keep it as the nursery for the new baby so decided to convert our spare room into Alfie's new room. On reading various bits of advice online it is suggested that the older sibling should be moved around 6-8 weeks before the new baby is due so they have time to get used to their new surroundings and it isn't such a shock. Throughout the whole process we involved Alfie, we asked him what colour he'd like his room, what he would like on the walls and showed him different beds and got him to point to the one's he liked. It was really nice to get him involved, I'm not too sure how much he truly understood but it was so nice to see him getting all excited.

As well as writing about the transition to big boy bed I'll also talk about the decor in his room as it's something I always love to read about on other people's blogs. 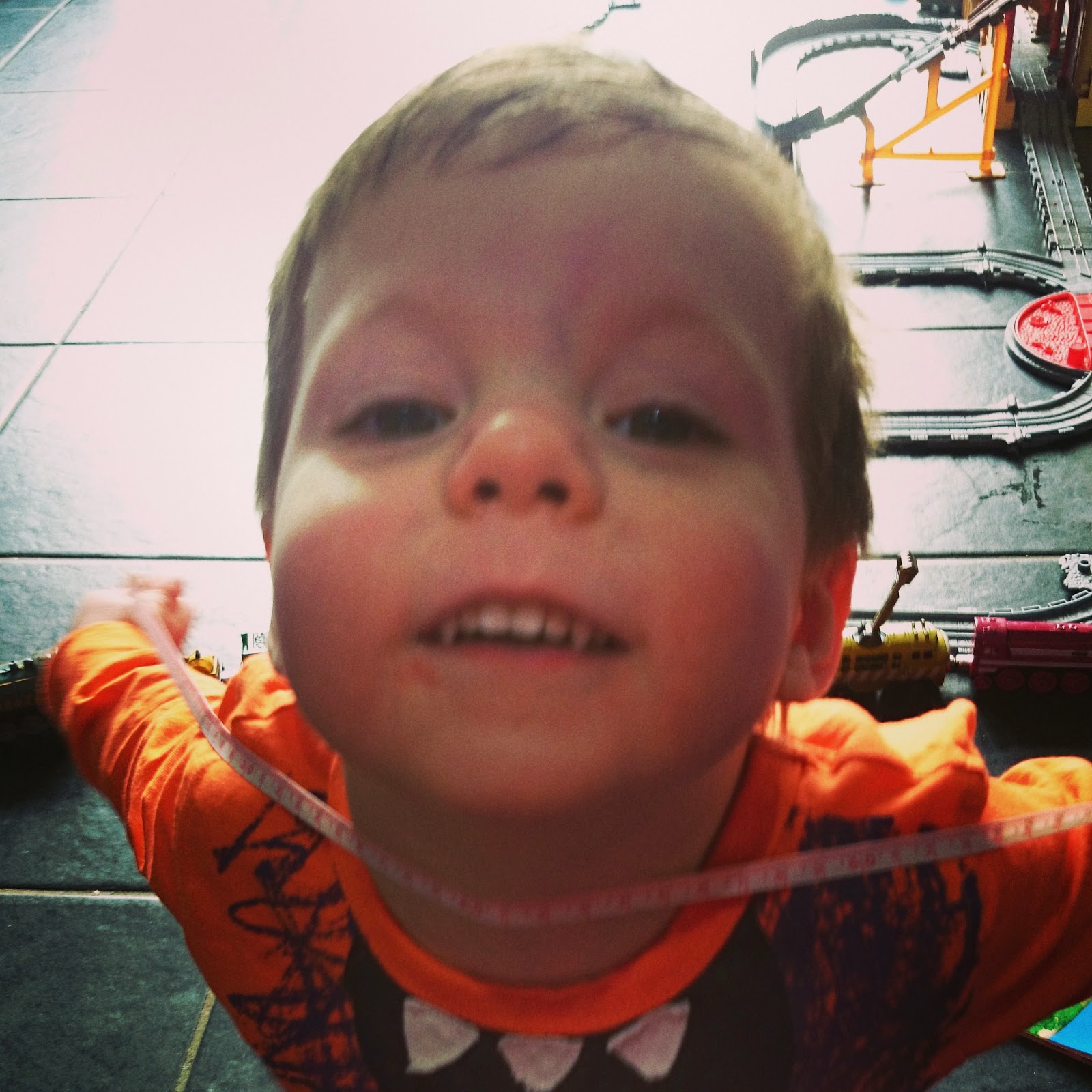 We searched for what seemed like hours for the bed, we wanted one that would last but was also functional, our spare room isn't a bad size so we could go for a reasonable sized bed and fit in other furniture that we wanted like a sofa bed, chest of drawers and wardrobe. After much deliberation we, well I say we, mainly my husband suggested a cabin bed. Initially I have to admit this filled me with dread, I mean these beds are quite high and what happened if he rolled out of it in the night? Alfie is a bit of a wriggle bum in and it did concern me some what. However, on looking at these cabin beds in more detail I realised that actually most of them have a little barrier on the sides and the chances of him rolling out were quite unlikely, and touch wood I'm happy to report we've had no such incidents.

So in the end we decided on a rather funky cabin bed from a fantastic website called Noa and Nani, it would appear the one we chose is no longer stocked but the nearest equivalent is the Pirate bed for the same price £199.99. I loved the fact it came with a slide and a castle theme, I just knew that Alfie would love it, I also like the fact that you can remove the ladder and the castle meaning this bed can grow with Alfie and be used till he is much older. We opted for the whitewashed pine and with it costing over £50 delivery was free and the delivery was super speedy, it came within 48 hours! It's also worth mentioning that it was very well packaged meaning no damage at all on arrival. It was easy for my husband to construct and took little less than 90 minutes. 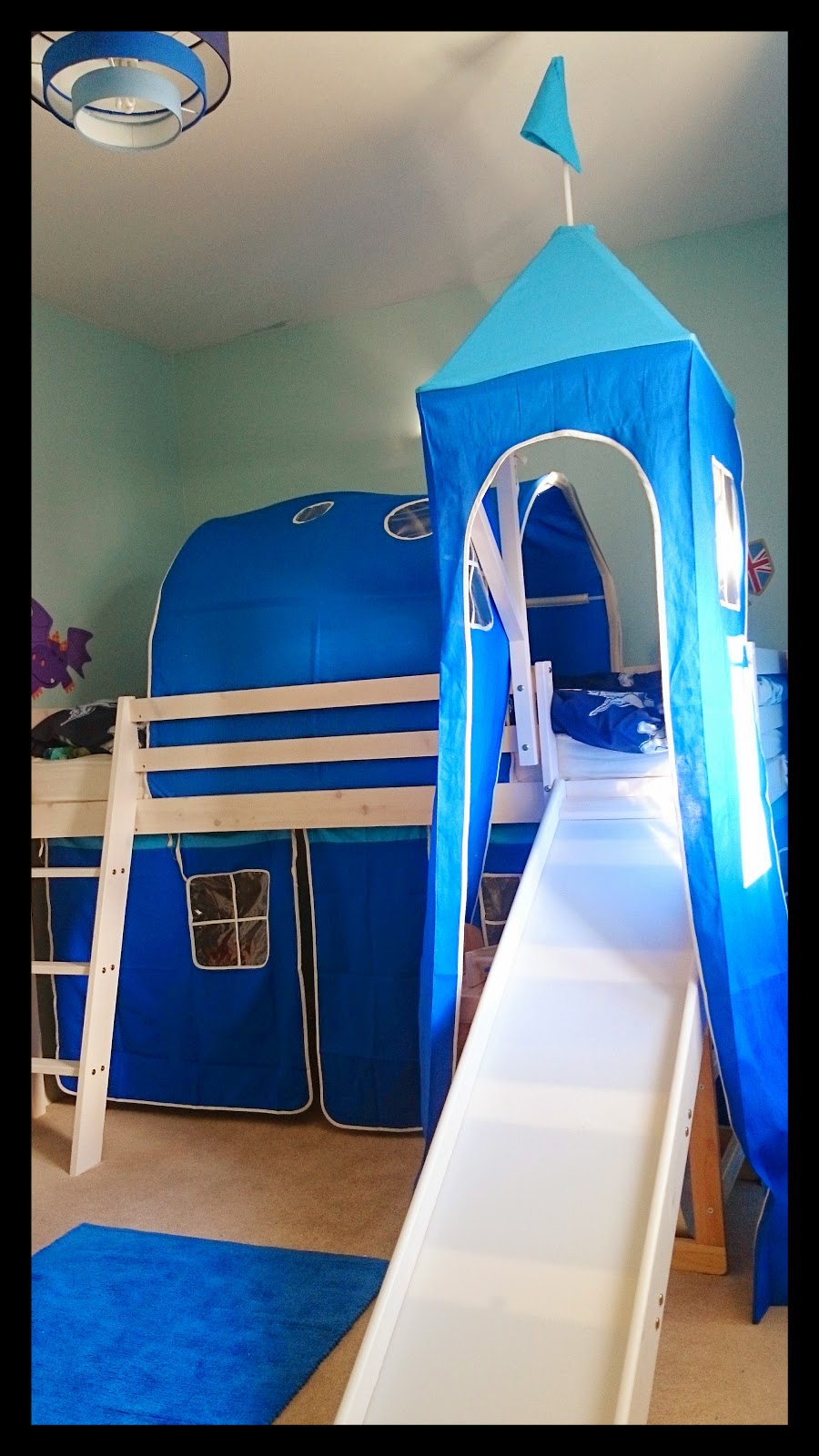 As you can see from the pictures you get alot of bed for the price, I can honestly say I've been really impressed with the quality and look of the whole bed.

Prior to putting the bed up we had given the walls a lick of paint with a duck egg blue paint shade, I also accessorised the walls with dragon wall art, an Ice Age mural (can be seen further down the page) and various Ice Age wall decals as Alfie loves the films. These were tricky to get hold of so I ended up having to order from Ebay and they came from the USA, Australia and China! We have a few more Ice Age stickers now as when I took these pictures I was still waiting for some to arrive, they were worth buying though as they really add to his room. I also chose a dinosaur theme to go with the blue on his bed. 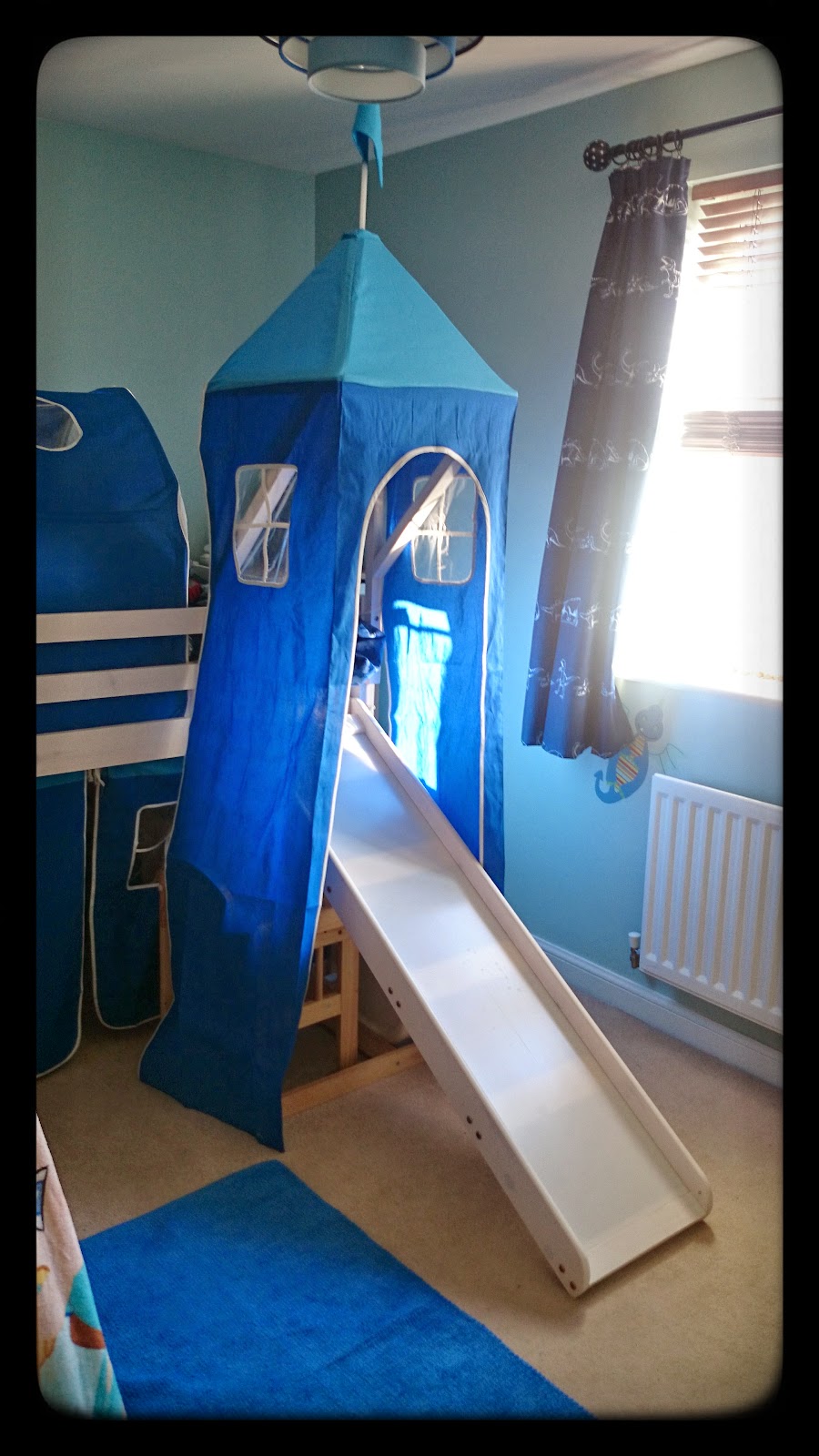 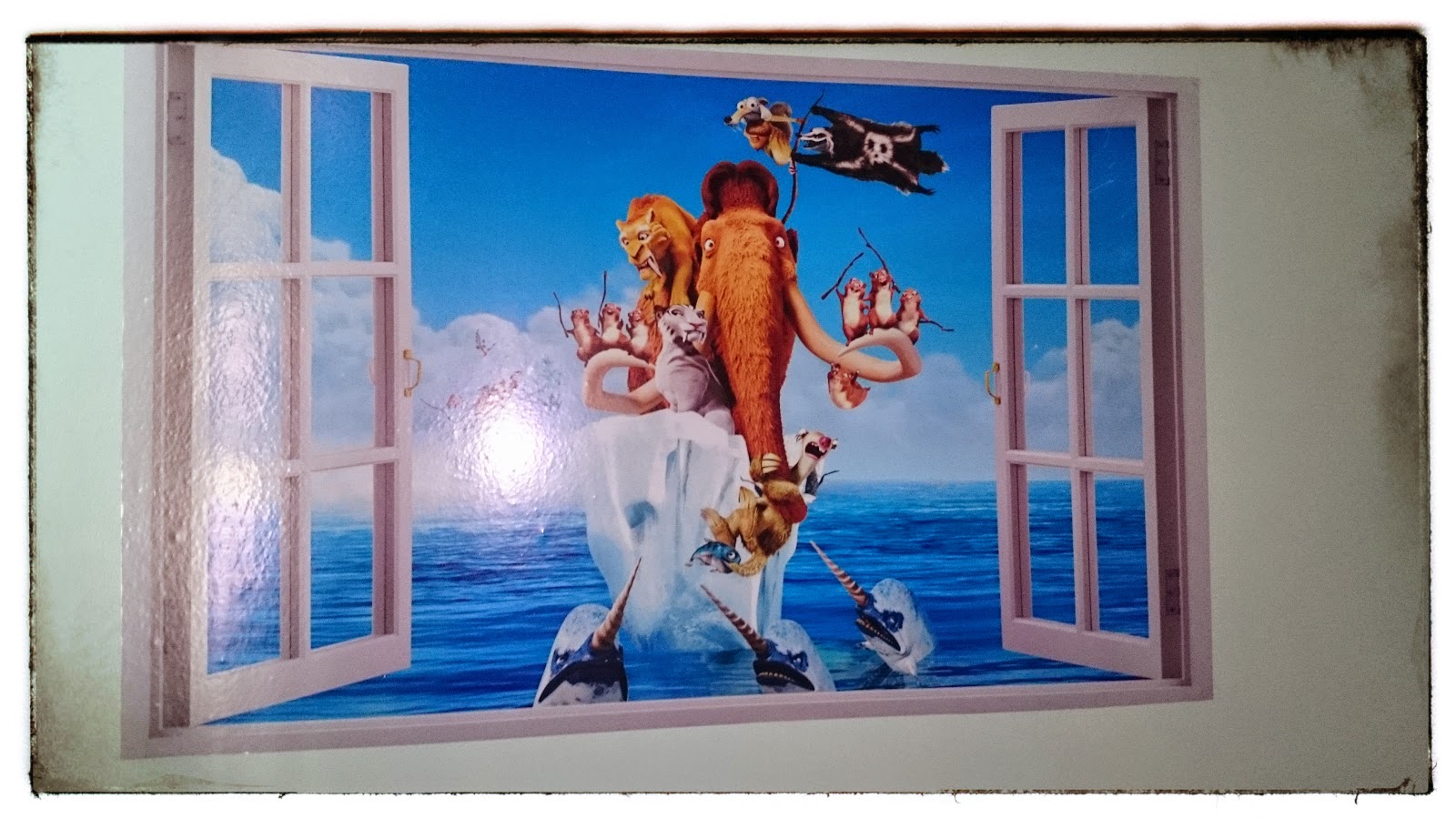 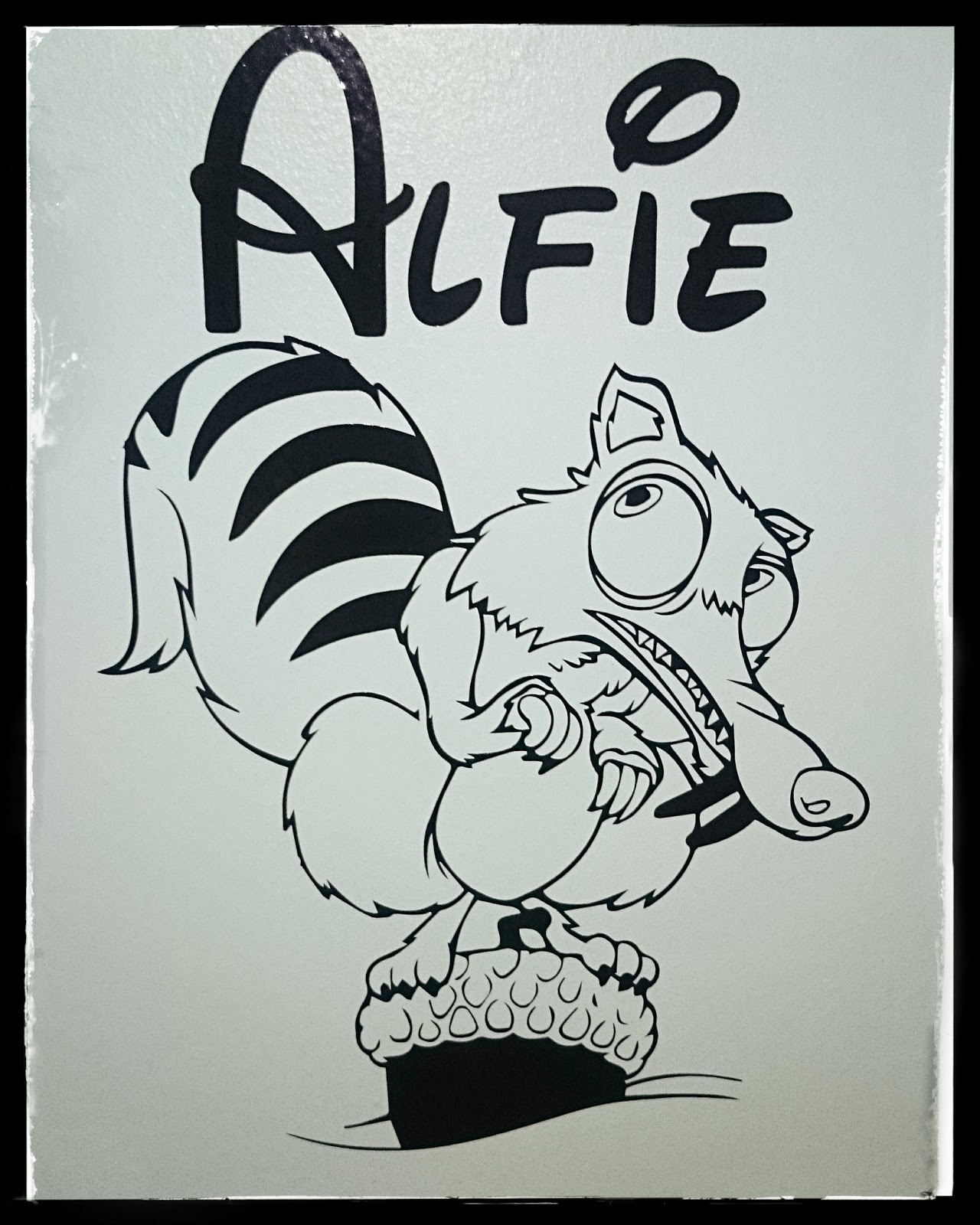 We already had slatted blinds in the window but needed some black out curtains so I pretty much bought everything else interior wise from Next. I absolutely love Next home and the quality of the items plus they had just what I was looking for to complement the rest of his room. 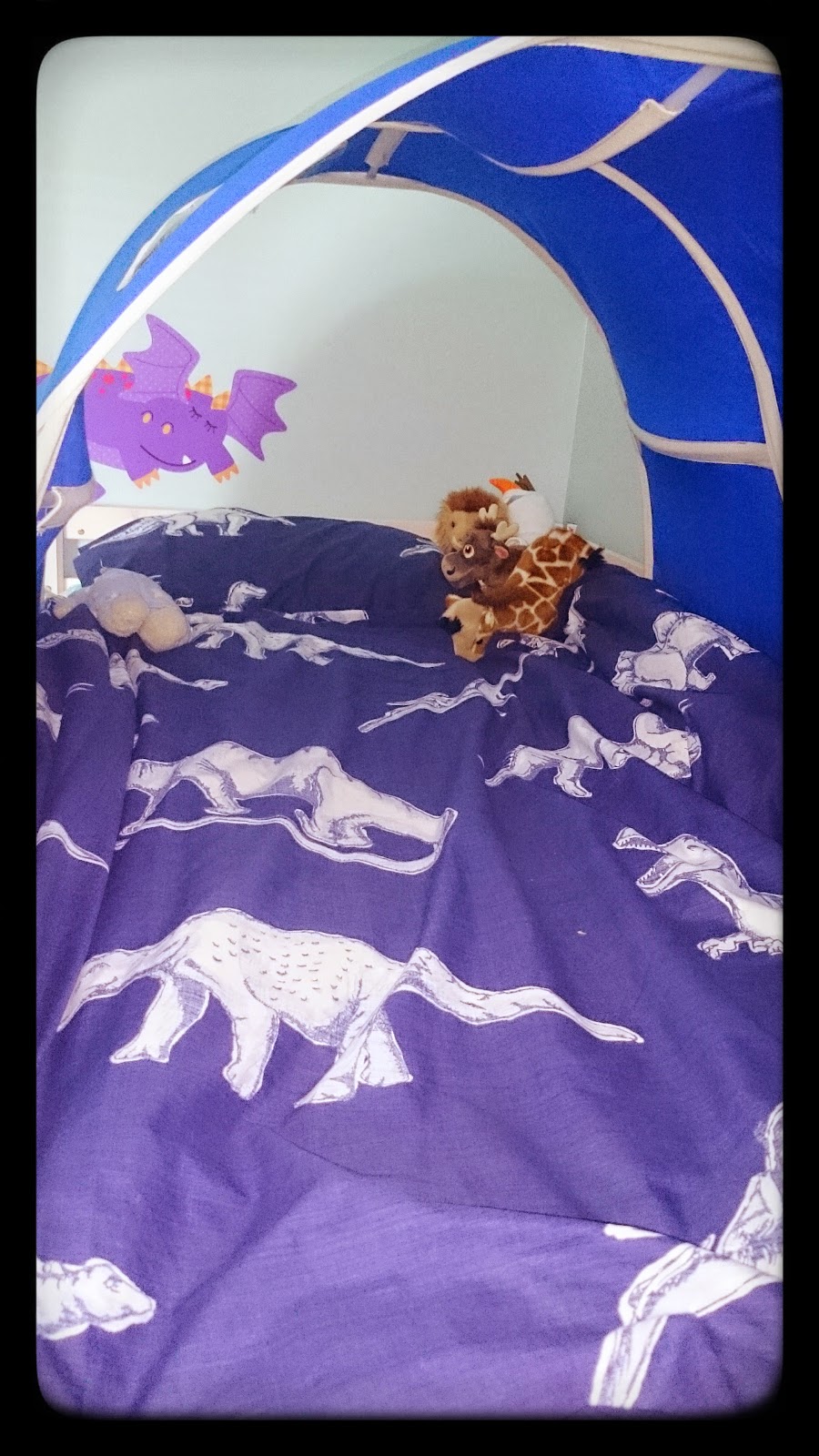 The dinosaur bedspread retails at £20 for a single and the blackout curtains cost £30 but I saved £5 by purchasing them together, the quality is excellent and they look great. The navy stars curtain pole cost £28 and is extendable meaning it can be used over a number of window sizes. The lightshade was a bargain price of £15, I opted for the 3 tier shade as opposed to the matching dinosaur one as I didn't want to overdo the dinosaur theme! The last thing I added to the room for a bit more colour was the plain blue chenile rug for £12, what a great price! The only thing I would possibly critique about the rug is that it can cause slight blue staining on lighter carpets which is what we have but once hoovered a few times it does reduce. 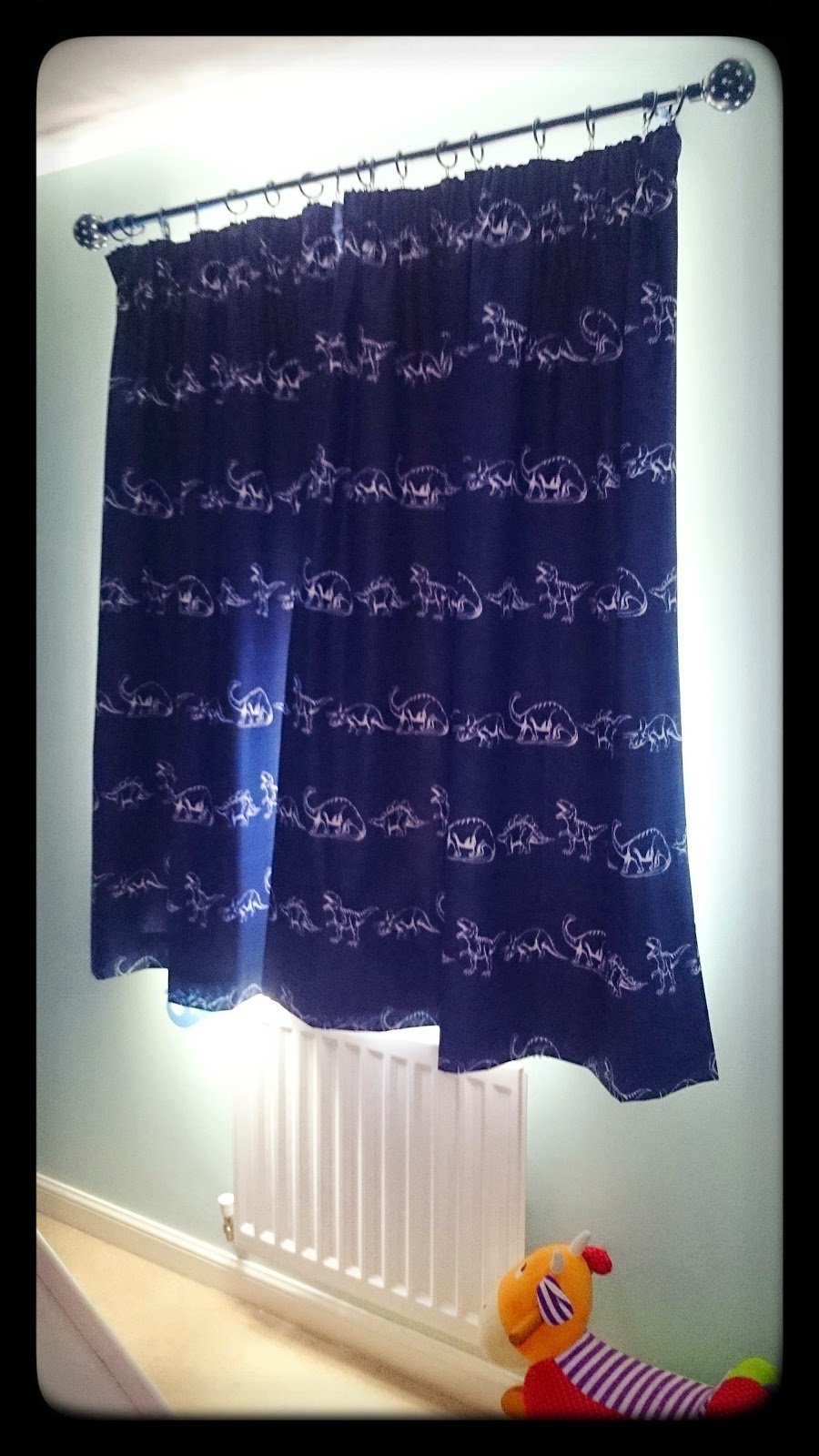 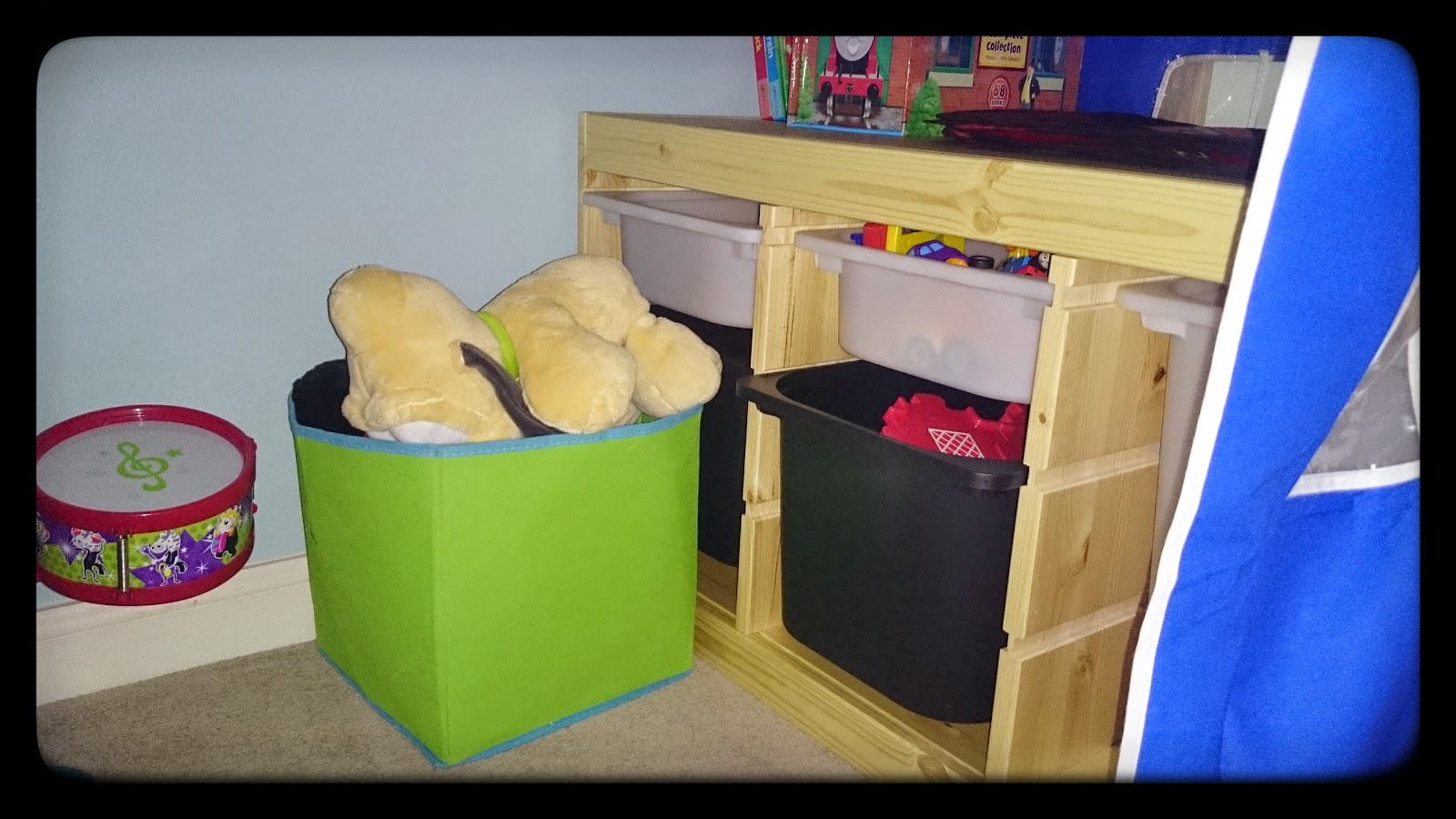 As you can see from the pictures one of the great things about a cabin bed is all the under bed storage it comes with! There is bags of room underneath for toys, books and all sorts to be stored. I opted to put some toy storage under and went for the Trofast frame from Ikea (RRP £40) and drawer system (various prices depending on drawers chosen), it fits perfectly underneath and has provided a really neat solution to storing lots of toys. Also from Ikea which you can just see in the picture below are the Askvoll chest of drawers (RRP £55) which fit neatly at the end of the bed, this is a narrower chest of drawers but the drawers are deep so I'm able to fit alot in them, they look great. 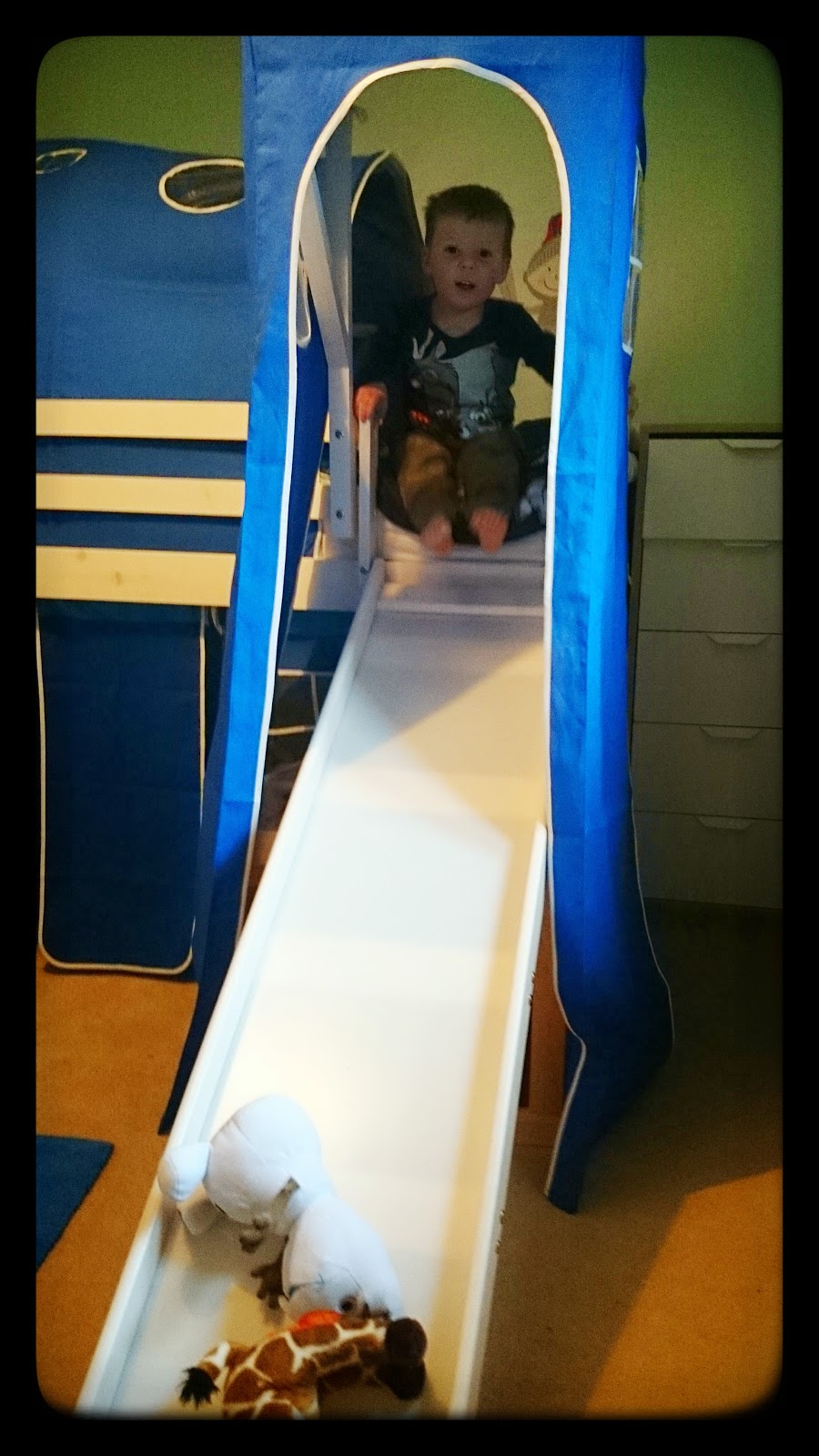 Right, so now I've waffled on about the actual room I'm sure you probably want to know how we got on transitioning Alfie into his new room. As I mentioned earlier throughout the whole process we kept Alfie involved and referred to this as his big boy room and that he'd be sleeping in his new big boy bed. I really was dreading moving him but I knew we had to, so the first night we kept his routine exactly the same as we have done from when he was little. Bath, pj's on, a few minutes playing, teeth brushed and then a book and quiet time on the sofa bed with dimmed lights.

He actually went to bed brilliantly and my husband and I were thrilled when he was tucked up in his new bed fast asleep, in fact he did brilliantly until 2am when he woke up crying, he'd been sick in his bed all over his nice new duvet, damn. Not a great start then! Not sure why he was sick but with a change of pj's, a cuddle and some quiet time he went back off to sleep and woke at 6am, not great but not bad. The next night we had a similar situation (minus the sick), he went to bed brilliantly but woke at around 3am, ok so the wake up's were getting later but still not ideal, again a quick cuddle and off he went to sleep again till around 6am. I should also mention that he was climbing down the ladder bless his heart and waiting at the stair gate for us shouting before we went up. This carried on probably for around the first week, but we persevered and the wake up's became less frequent it was just the super early mornings that we needed to remedy. When I was putting Alfie back to bed in the middle of the night  we had minimum interaction, that he knew it was night time and I didn't spend too long with him before putting him quietly back to bed.

It was at this point I decided we needed to invest in a gro-clock and I'm bloody pleased we did! I'm hoping to do a review on this so won't go into too much detail but those who don't know it works on the principal of the stars coming up which means sleep time and the sun coming up meaning day time, it's a simple idea but I think very effective.  Alfie now knows that he should get up when 'Mr. Sun' is on his clock and not before, we are now having regular 7:30/8am wake ups instead of 5:30am, brilliant!

Overall the transition hasn't been as scary or awful as I was anticipating it to be, I genuinely thought he'd be out of bed hundreds of times a night and he wouldn't want to sleep. Yes, of course there have been the few odd occasions where he's not settled or he's got up but otherwise he has been an absolute star in his new room, he loves it and now when he's tired he is asking to go to bed or lay down, he seems to get a really good sleep and I have to admit his bed is really comfortable, I think I'd have a great sleep in there!

Now I'm no sleep guru or anything like that at all but I strongly believe that keeping his routine as similar as it can be has had a huge influence on getting him to settle, I also believe that perseverance plays a strong part and ensuring that he sleeps in his own bed no matter ho hard it is. I would rather sit up with him and settle him than bring him into bed with us so he knows that his bed is where he sleeps.

Alfie very, very rarely naps during the day now, he hasn't napped in the day from about 14 months old so he is generally knackered by the time we put him to bed which is why his bedtime is usually 7pm, 7:30pm at the latest. This is what works for us but it may not for other people.

I hope you've enjoyed reading this and I know it's a little long winded but wanted to cover all bases!