It's been a few weeks since we've returned from our rather lovely break to Bluestone Wales. My feet haven't touched the ground since we returned and I fear I've had a little bit of the 'bluestone blues'! I've got quite alot to write so I think I'll split the posts, probably 3 the amount I tend to ramble on! I had heard lots about Bluestone through a variety of bloggers and also from my parents who stayed there a while back, so I had an idea of what to expect. I was pretty chuffed when I was asked if we'd like to head to Pembrokeshire and have a stay in the resort.  The few days leading up to us going I was really looking forward to having a few days away,  we all needed some family time.

During May we'd had some lovely warm days but in typical British fashion it looked like we were in for a bit of a wet week while we were at Bluestone. It wasn't going to stop us enjoying our time though as we knew by looking online at the Bluestone website there would be plenty to keep us occupied while there. 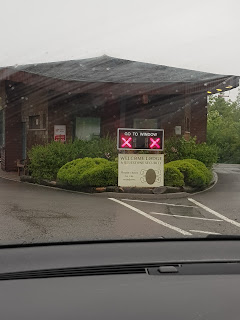 After a bit of an epic 5 hour journey (including 1 stop) we arrived at Bluestone with no problems at all (other than the shocking wet weather!), the resort is well signposted and easy to find. When we arrived, around 5:30pm there was only 1 car in front of us to check in. I loved this system of being able to check in while staying in your car, considering it was hammering it down, the last thing I wanted to do was walk somewhere to check in. We were waiting at the kiosk (if that's what they're called) for less than 10 minutes, the lady who checked us in was lovely and we were sent on our way to find our lodge quickly and efficiently. It was fairly easy to find our lodge, there are various parts to the resort each named differently so it was a case of following the map and the signs and looking out for our lodge number. 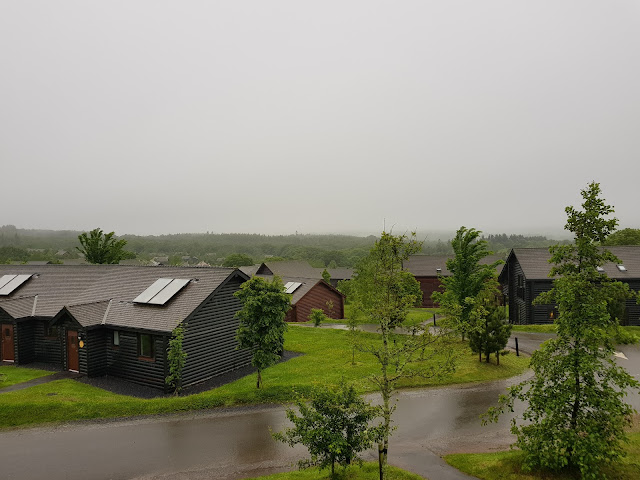 We were staying in a Gateholm Lodge on Preseli View (named after the mountains you can see in the distance) which sleeps 6 in an upside down design. Once we'd found our lodge we unloaded our stuff and Adi headed over to the nearest large supermarket (which FYI was Tescos in Haverfordwest) to stock up on some essentials, there are smaller supermarkets nearby and a village store on the resort but for a larger supermarket this would be the place to go. On entering our lodge it was immaculate and beautifully presented. There were 3 bedrooms on the ground floor (1 double room with en suite and 2 twin rooms, travel cots are provided as standard) and a decent sized wet room. The bottom of the stairs have a safety gate, as did the top of the stairs. The upper floor is a generous sized open plan kitchen, dining area and lounge with flat screen TV. It's clean, modern and airy and these lodges really do immerse you into the countryside and the view over the lush green hills is stunning. Most nights I would stare out of the patio doors and just look out over the hills, even with the pouring rain it's incredibly peaceful to take in the view. The lodge itself is very well equipped with a little welcome package to see you through (consists of washing up liquid, dishwasher tablet, bin liners and washing up sponge/cloth), very handy. My one very small gripe is that the cupboards aren't child locked so I did spend quite a considerable amount of time convincing Elarna that wine glasses and plates are not for playing with! It is only a very small gripe though. Wifi is also included within your stay, this is basic wifi which can be used for general browsing so if you're wanting to do any streaming or more intense stuff it's worth upgrading it to the premium option, my husband was doing exam marking at the time so we used the premium wifi and it was definitely worth getting. 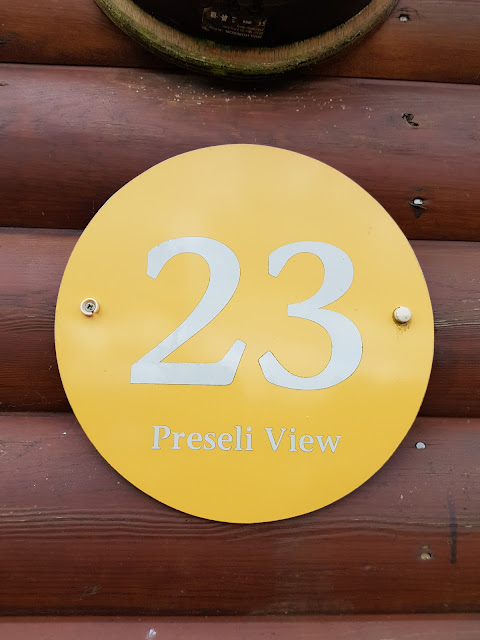 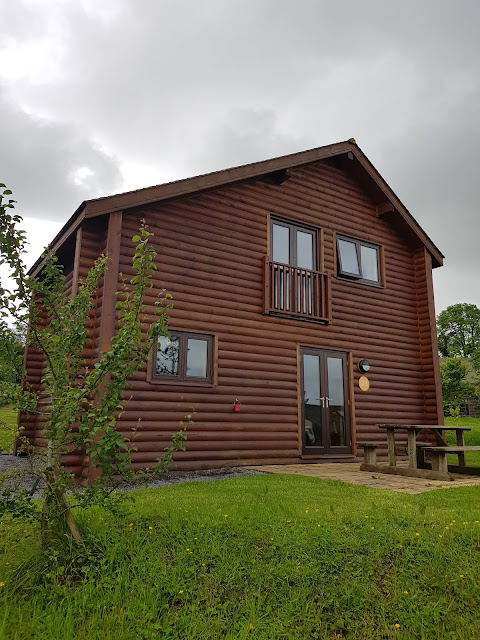 Now Bluestone is an eco friendly 'no car' resort, meaning that once you've found your lodge and unloaded the car you need to park said vehicle in the large car park and make your own way back to your lodge......unless you have a golf buggy, but more on that later. While we were there I have to say we did see quite a few cars driving within the resort which baffled me somewhat, especially as we were walking everywhere (more on that later), so I can only assume that they had special permission to use their car within the resort, there were also several maintenance vehicles on site around the time we were there but again, I assume these were because there were several works going on improving the resort. These didn't impinge on our stay at all, other than the short cut from our lodge to the long stay car park was closed off meaning that any time we did need to go to the car, or the blue lagoon we had to go the long way round and with 2 small children this wasn't really ideal but we got on with it. I have to say the resort itself is so clean, I don't think I saw an ounce of rubbish on the floor while we we were there.

Our first night was very chilled, we had a simple tea and the kids went to bed while Adi did exam marking and I sipped wine and listened to the rain hammering down. I find it really quite hard to relax but sitting on the large sofa, wine in hand looking out over the hills watching the rain absolutely lash down made me feel really quite zen!! I watched it get darker and darker until all I could see where the lights around the resort and continued to sit quietly. I watched a bit of telly and went to bed, I have to say I slept brilliantly while there, the bed was so comfy and the room was a good temperature. I woke up feeling very refreshed which was lovely and On Tuesday morning we wergreeted by beautiful blue skies and no rain! 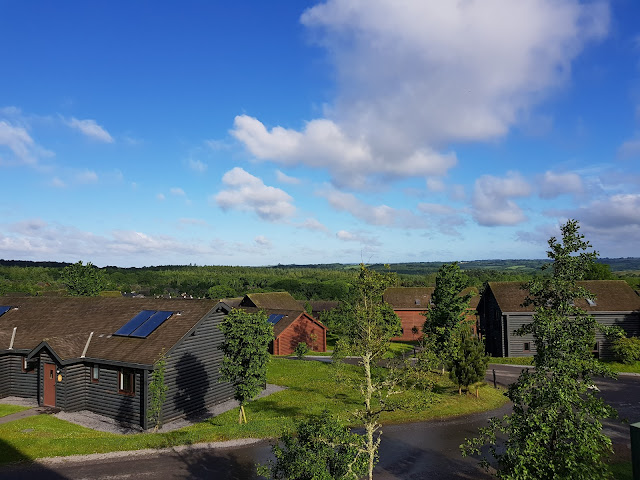 As we'd driven quite a way to get to there we decided that Tuesday would be a quiet day and we'd go to the blue lagoon and have a less busy afternoon and explore the resort a bit, I'd already booked our dinner reservation at the Farmhouse Grill later in the day so there were no worries about food. Everything can be managed online prior to arriving which is brill, there are tons of activities to choose from and a wide variety of restaurants to eat at, you simply choose your time, pay a deposit and then turn up on the day. 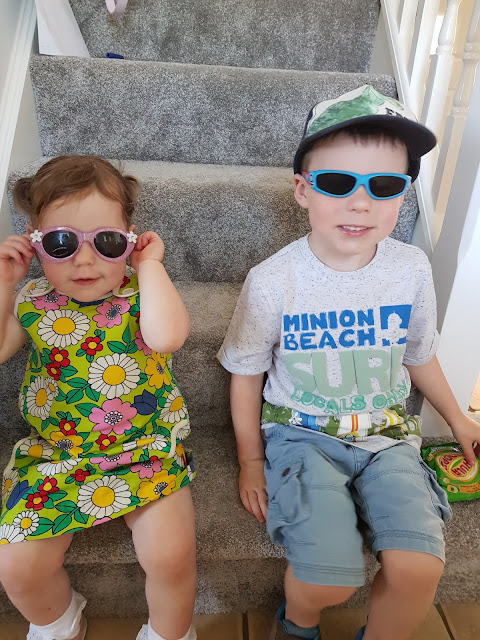 I confess, we didn't book the kids any activities, firstly because in my opinion they are expensive, plus there were none that really would have appealed to my 2, Alfie was either to young for the ones I though he would like and Elarna was either too old for some of them or too young for the others so as we were only there for 4 nights I figured there was plenty to keep us occupied without booking any extras. I wasn't wrong! The only thing I wished we'd booked and paid for was a golf buggy. These cost £90 for the week and on initial costing this does sound a little pricey but I feel that we would have massively benefited from one. We actually visited the golf buggy area to try and get one while we there but rather disappointingly there were no buggies left and we were put on a rather large waiting list for one. I was really quite bemused by this, naively I thought that they would have enough buggies to go around but apparently not, so because of this, with the weather being wet we were fairly restricted on where we could visit within Bluestone, we didn't even make it to the steep ravine or camp smokey which was a shame, so should we be lucky enough to go again I would definitely shell out for a buggy! It would have made getting around so much quicker and easier, we just had to put up with the protests from the littles that their legs were tired and get on with it!

So, I shall leave it here for this post, otherwise it will start resembling a dissertation! In the next post I'm going to be talking about eating out at Bluestone, the blue lagoon and our trip to Folly Farm, which will also be another review!  So keep your eyes open for Bluestone part 2.......
Posted by Helen - Blogging Beautifully at 5:30 am