Wow, the week really did fly past in a blur. I have been soooo busy over the last few days every day seems to have gone into the next. Last weekend we had an absolutely fab time over at Legoland in Windsor (review to come soon), we met Adi's sister in law and her husband and son, we've been meaning to go for ages and we just happened to be free on that weekend (well kind of, may have had to rearrange the BFF but I'll make it up to her!) so it was a good time to meet them. We had a great day, albeit very long and we need to go back again as it is soooo big and impossible to fit everything in one day and we missed a few bits so need to make a return trip at somepoint. It was a definite hit with kids and grown ups alike.

Sunday we took Alfie to watch the new Thomas and Friends film at the cinema, although he doesn't seem as mad on Thomas as has done previously he still loved watching the film. We've taken him to the cinema a few times now and he absolutely loves it, he sits with his popcorn engrossed in the film and doesn't move a muscle. I actually quite liked this new film too so if you have a Thomas fan it's well worth seeing. Alfie has lots more films lined up to see at the cinema so I think we better start sweet talking the grandparents to look after Elarna as she's at the age where she won't sit still and she stayed at home with my mum and dad while we went off to the cinema. After the cinema I had a cheeky little stop of to buy some new curtains for our living room, the past owners kindly left the curtains which has been helpful but they were these awful pale, yellow floral things......not by cup of tea so I'm slowly replacing them for some much more my style (think charcoal and black, much more glamorous!). Anyway I digress. 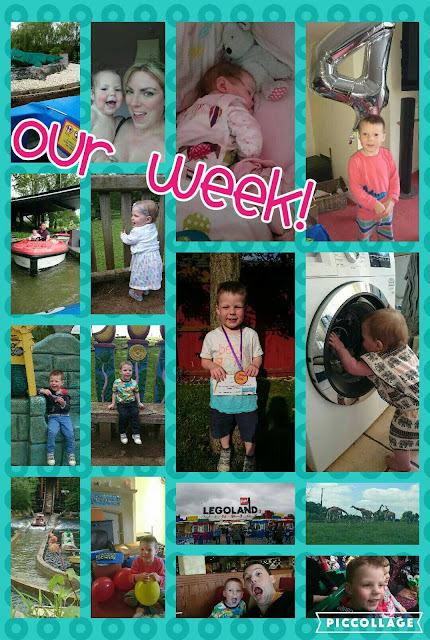 Monday I had 1/2 a day at work,  this was incredibly short notice to book off but I needed to attend Alfie's pre-school to sort out some bits for him transitioning to school and he also had his little sports day. This was so lovely, all the kids did so well......Alfie excelled at the egg and spoon race hehe, didn't drop the egg once! He was very proud to receive a little medal and certificate for his efforts. It was a lovely way to spend a couple of hours! I was off on Tuesday as usual, this was my 'hair day', wahooo no more roots! Wednesday I was working, it was a full on day, busy but went quickly and that meant 6 days off when the day was done. Thursday was Alfie's 4th birthday! I was feeling a little emotional, I still can't quite believe I'm now Mummy to a 4 year old.......insane. We had a GREAT day, we started the morning with all his pressies which I think he enjoyed immensely! We then spent the day at Woburn Safari Park, I haven't been hear for years and years and I was a little excited hehe. Alfie, as I've mentioned before is a big fan of wildlife and animals and we seem to be working our way through all the zoos we can, even in just his short life so far we have been to more zoos than I have in my life.......I think we have been to 9 in total so far and 2 of these are French zoos and also we have visited a couple of these more than once, think that's pretty good going so far ha! Still more to visit though so I see us being busy over the next few years. We finished the day off with tea at Frankie & Benny's! Friday we kept the littlies in nursery/pre-school so Adi could pick Alfie's cake up and I could go and do the (mammoth) shop for his party today.......OMG I bought soooo much, it was actually spilling over the top of the trolley, wish I'd taken a picture! I spent the rest of Friday cleaning, tidying and baking and making various party bags. Don't feel that stressed about it now, I think it's going to be an ace day......plus get to see lots of our friends and family and meet some blogger friends that are local to the area which I'm looking forward to!

So as you can see. pretty busy week here in the Beautiful Things household! How has your week been?
Posted by Helen - Blogging Beautifully at 7:47 am