A Visit to Legoland! 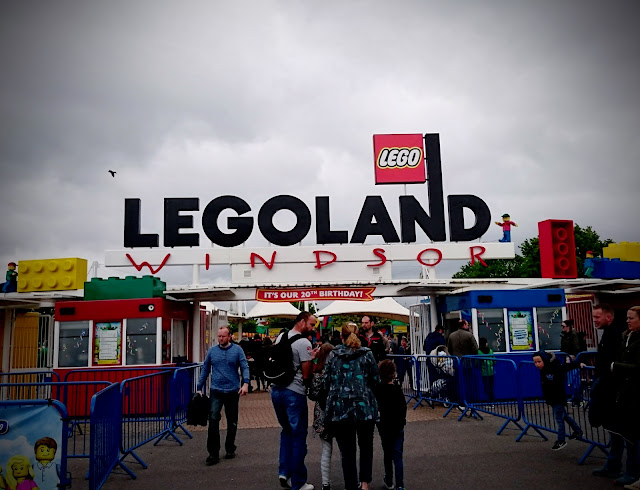 Just over a week ago we had a very exciting day planned. We were off to Legoland Windsor. We have been wanting to visit for absolutely ages but have never got round to it. It's not really that far from us, it took us just over an hour and a half which isn't too bad at all. We arrived at 10am, bang on opening and the car park was already filling up. The weather was dry, although cloudy to start of with but this actually was quite nice to wander round as it wasn't too hot.

My husbands sister and her husband live around half an hour away from Windsor so it seemed the ideal opportunity to meet up with them and their little boy, Alfie's cousin. One of the things that had been putting us off going was the entry cost. We had heard from several people that it is mega expensive to get in and they are not wrong. We don't mind paying an entry fee for a great day out but when I saw the cost online I have to admit I thought it was pretty steep.

So there are several different prices. You can either pay on the day and pay the full cost (a staggering £50.40 for an adult and £46.20 for a child), you can pre-book online and if you book several days in advance you can save a fair amount. E.G, if you book 7 or more days in advance the price comes down to £27.00 a ticket (for either adult or child), if you book 2-6 days in advance the tickets then cost £40.00 a ticket. You can also choose to purchase a 1 or 2 day ticket depending on how long you want to stay.We were planning on using one of the vouchers we had been collecting from Kellogg's cereals which was a free adult entry but because my sister-in-law has Merlin annual passes they could get us all in for guests meaning we paid £10.00 each, so this was a huge help.


This is the 1st time that Alfie has been to something like this, his first choice of a day out is usually the zoo so taking him to a theme park is very new for him and initially he was a little overwhelmed! It took a little while for him to warm up and become excited about what Legoland was all about and what it had to offer.

To get to the actual park itself the best way down is to use the funicular train which takes a couple of minutes to the bottom of the hill. Once you get to the bottom you are immediately surrounded by Lego and lots of it. The place is soooo big it's hard to know where to start.

There are several different lands throughout, these include: We started at Lego City and the first ride the boys went on was Fire Academy where it's a race against time to power a fire engine across a short distance and put out a 'burning' fire.........definitely an energetic way to start the day off. Fun for Daddy and son without a doubt! 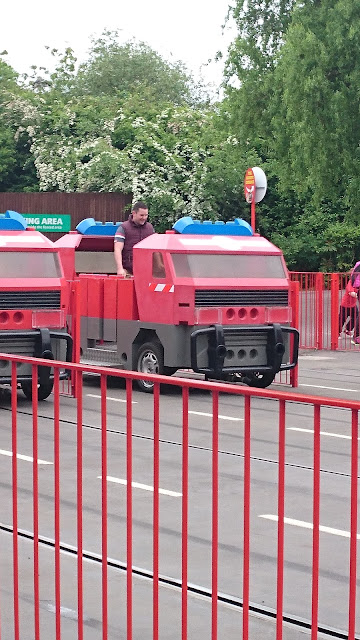 We then headed over to the Coastguard HQ which we could all go on. This was alot of fun, it consists of sitting in a battery powered boat and driving it around a course avoiding obstacles and admiring the Lego models placed around.......there also may be a bit of water squirting too which was funny. One of the things that I wondered prior to visiting is whether Elarna would be able to go anything, I needn't have worried as there are several rides suitable for under 3's, there is a list available here which tells you which are suitable, we particularly liked the fairytale brook which we went on later in the day. Alfie was able to go on most rides, because he's a little bit on the short side there were some that he couldn't go on but mostly he could go on a majority. 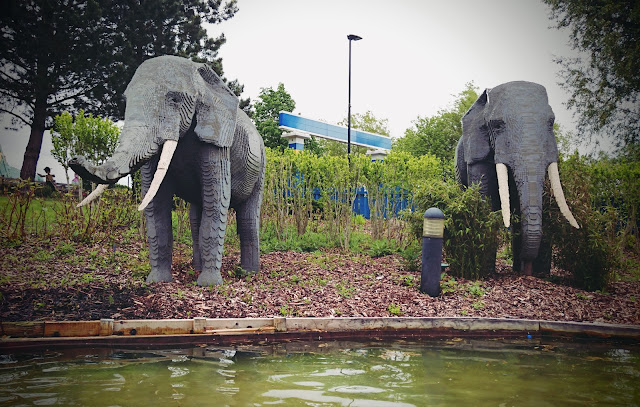 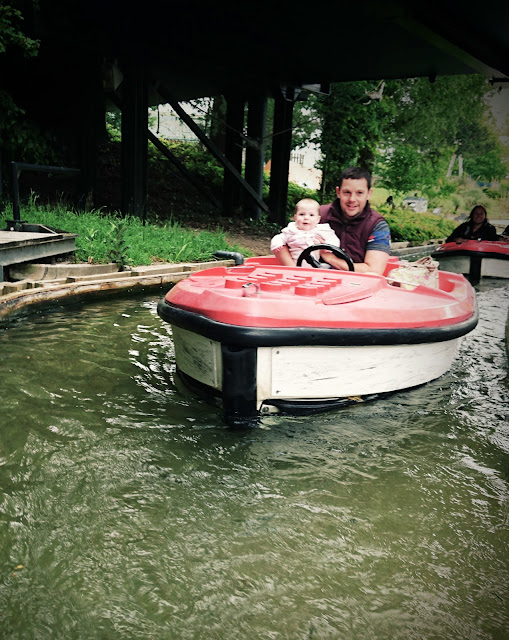 We then took the Heartlake City Express train which heads through the park with lots of Lego models to look at and enjoy.......there was also the chance of getting a little wet too! 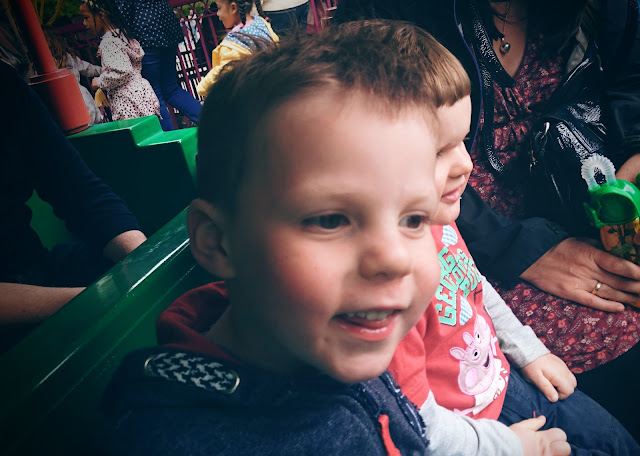 We then went on my favourite ride (other than fairytale brook) which was the Atlantis Submarine Voyage, this was beyond cool! You get inside a yellow Lego submarine and it takes through an underwater journey where there are masses of tropical fish, stingray and SHARKS all surrounded by lots of underwater themed Lego models. It was absolutely brilliant and if the queue hadn't have been quite so big I would have loved to gone round again. It was such a unique and fun ride that we all could go on and enjoy. After we had been on this the boys made a little mini Lego shark outside, this cost £3.50 and it was cute little memento for them to keep. It was also nice to have a few minutes to sit quietly and chill. 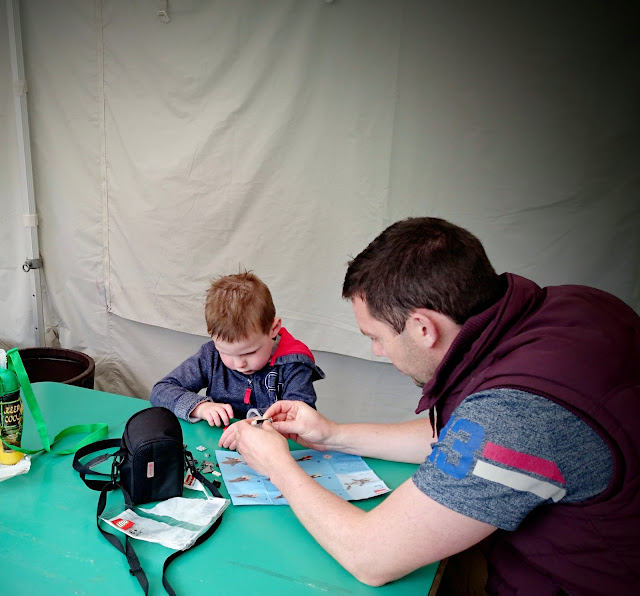 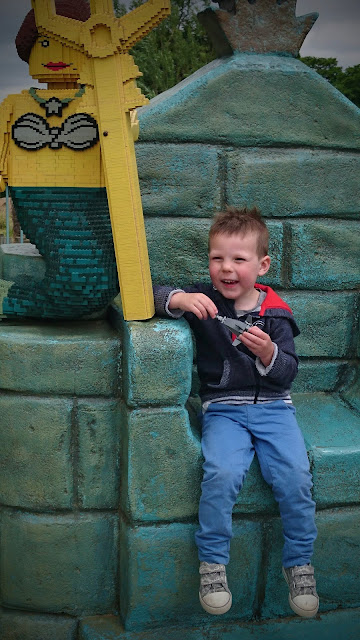 After all this fun and excitement it was definitely time to grab something to eat, the boys were getting hungry and a bit fractious and we all needed a drink and a sit down. We headed over to Heartlake City and went to the eat as much as you want pizza and pasta restaurant. Do you know what as far as it went for food there was plenty of choice and the pizza was delicious (it tasted very similar to a popular chain pizza restaurant!), I liked that it was eat as much as you like as we could just help ourselves and get our moneys worth, overall it cost around £50 for 4 adults and 2 kids, not bad considering! After eating we managed to catch one of the 2 shows that they put on in the display area. We watched the pirates of skeleton bay (there is another one which is called Lego friends to the rescue), it was a great show, sadly I didn't get any pictures as I was squeezed onto a step with Alfie but it involved lots of swashbuckling adventure, acrobatics and throwing themselves into the water.........very good and the kids seem to really enjoy it. 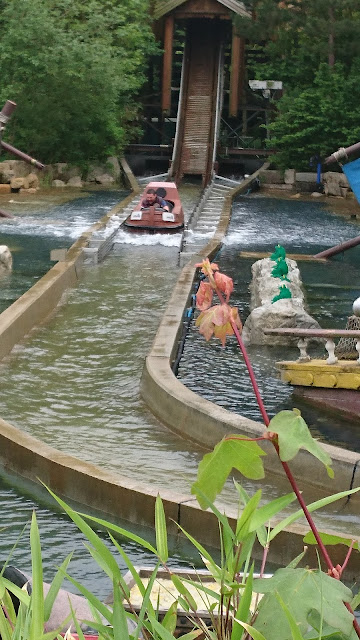 After we'd all got alot more energy we walked over to Pirate Shores. Adi, my husband was desperate to take Alfie on one of the bigger rides, sadly his cousin who is a bit younger wasn't quite tall enough for some of the bigger rides so I waited with Elarna (who eventually had a power nap) and the boys queued for the pirate falls log flume. Now this was the one that had a bit queue, we'd been quite lucky up till now but I would say we waited a good 45 minutes for them to come down(with some incredibly annoying pirate music that was on a loop!). I think it was worth it though as Alfie had the biggest smile when he came down! He is such a thrill seeker like his Daddy. However.........he was soaked. I knew he was going to get wet but he was drenched! Luckily I had put a change of clothes in but not a new hoody so this meant that he either froze or we spent an extortionate amount on a new one......I'm sure you can guess what we did. £20 later he had a new, dry hoody! Sadly at this point the rain did start to fall and although it wasn't heavy it was starting to get a bit colder. We decided not to do any more water rides and head over to Duplo Valley, although not until the spinning spider was tried, much to my delight watching my hubby turn a shade of green as he was spun round very fast! 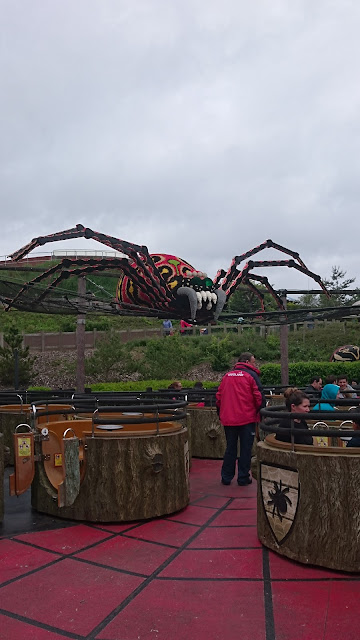 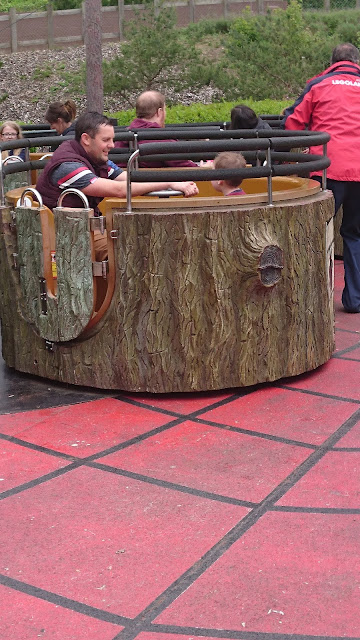 As we headed to Duplo Valley the rain did start to become a bit heavier, the splash towers and drench safari were open and we were debating letting Alfie go on it but 1. we had no more clothes, 2. we'd have to buy home some more swimming trunks and 3. he was really chilly so we decided against it. Instead we went on the fairytale brook which was so cute. They are little leaf boats that gently take you around a brook with lots of fairytale Lego characters, it's very gentle but very cute and I loved it. If I hadn't already got a wet bum from the wet seats and was a bit warmer I would have loved to have gone around again. Instead we decided on one more ride and then to head home. Our final ride was the Duplo Valley Airport. They were these crazy helicopter that you directed up and down and round and round.........because it wasn't very busy we stayed on these and I think we had about 6 goes. It was a good last ride before we left. 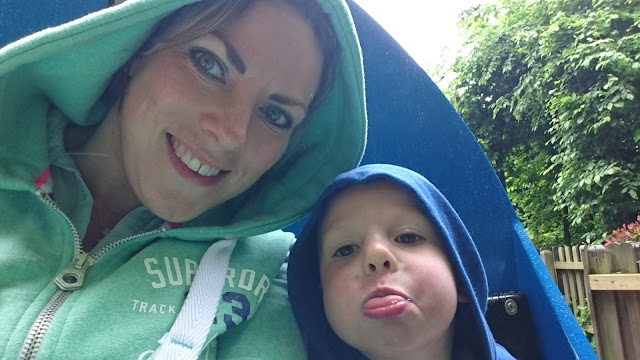 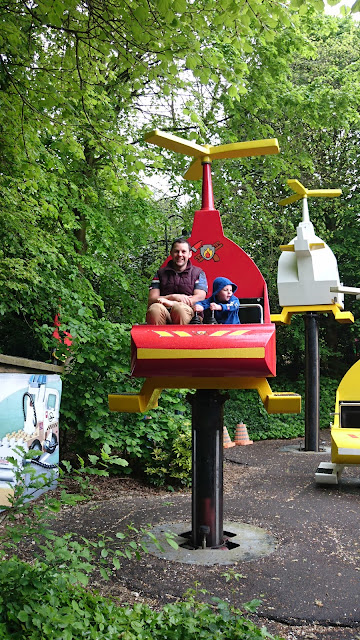 Lastly we walked through Mini Land which as the name suggests mini replicas of all sorts of landmarks made out of Lego. Honestly, it blows you away, there is so much to see and the detail in some of them models is incredible. I couldn't put more pictures on as I took so many but I picked out a few of my fave's. I especially loved some of the moving items such as the trains and ferries, just so much detail and thought had gone into it. 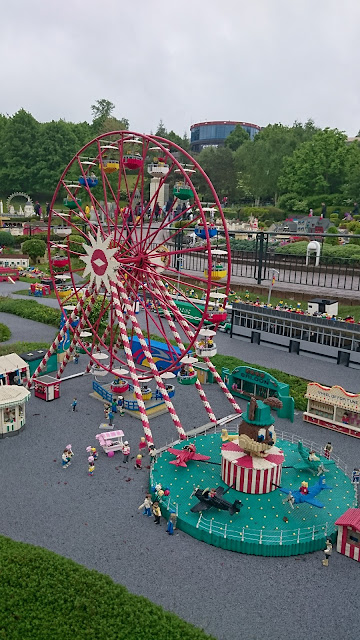 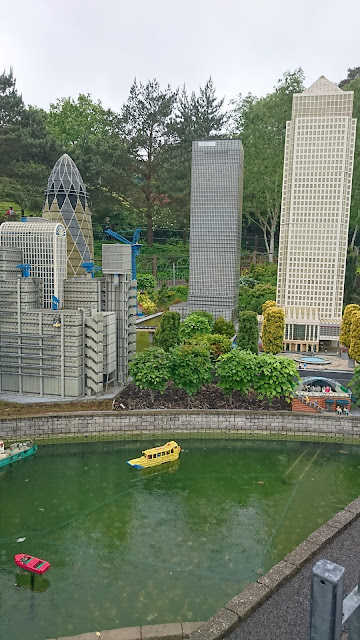 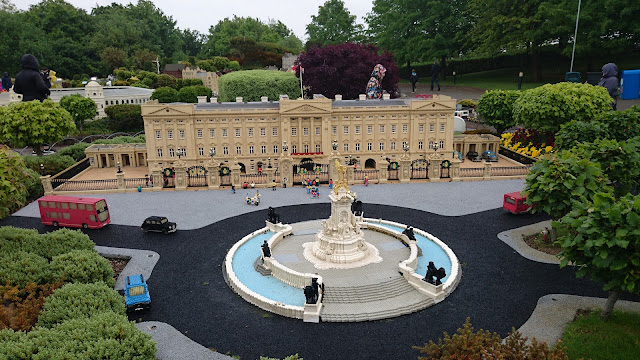 Overall we had a fantastic time. It was fun for everyone, not just the kids and so much to see and do. I think that's the downside really,  that it's just so big that it's impossible to do everything in one day. Not that I'm saying there's too much to do as I guess it is to entice you back but there really is too much to try and cram in to one visit. We are already planning our return trip, I'm hoping that we can stay in the Legoland hotel as I showed Alfie the themed rooms and he said that he would just love to stay and actually so would I! So perhaps in a few months I can grant him his wish. I'm already looking forward to our next visit.

Has anyone else visited Legoland? Did you love it as much as us?

* Please note, I wasn't paid in any way for this review I just wanted to write about having a great family day out!