Well haven't I been lucky, in a turn about of events I have been lucky enough to have another week off......more about that shortly. Other than the 2 days that Alfie & Elarna are in nursery I have spent 3 lovely days with them, it's been ace. It's been really nice to spend a bit more time with them, unexpectedly.

So last week I mentioned that I had been offered a job and was debating which to choose, well I decided to take a gamble and a new challenge and accept the job in the GP surgery. There were lots of pros and cons to consider but I'm looking forward to a brand new sector of the profession to me and entering the world of practice nursing. I start on Monday and because I had no contract or real loyalty to the previous job that I had just started it was agreed I could leave immediately and begin the new job asap. I have no idea whatsoever if it's the right decision, time will tell but you have to take these chances in life! 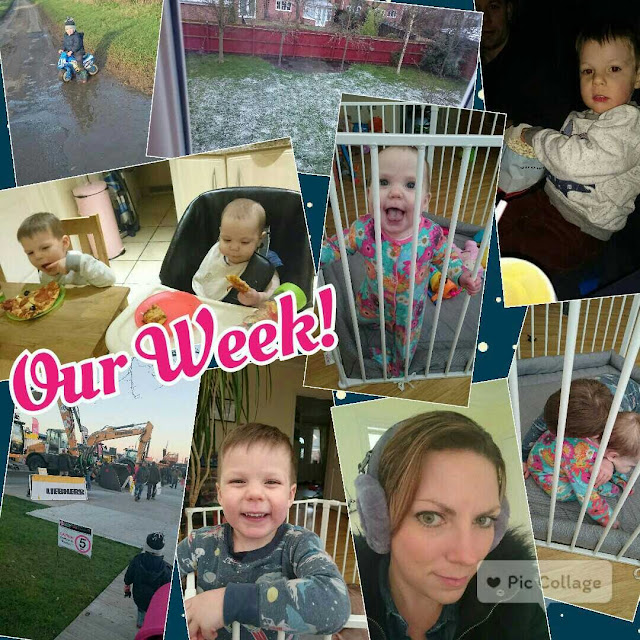 Last weekend started with Alfie at rugby, it went ok......he's enjoying it but doesn't always like to join in, I do think he'll gain more confidence as time goes on. Later in the day Alfie really wanted to go for a walk so my husband took him on an epic walk over fields, through a ford, mud and icy puddles on his sit on motorbike! I stayed at home while Elarna slept but then had to pick them both up as Alfie was soaking wet, muddy and I don't think my husband wanted to carry him all the way home! On Sunday, we had a tiny, teeny sprinkling of snow, bit rubbish really! We went to the cinema (as a family, eek!). This is the 2nd time we've taken Alfie, we went to see the new Thomas & Friends film a while back and he loved it so this time we went to see The Good Dinosaur and once again he was transfixed by it, I loved it too, it was a great film if anyone fancies a trip to watch it. Elarna was pretty good throughout it too bless her. We were going to go for a pizza after but Alfie insisted that we had homemade pizzas so off we trotted to Tescos to stock up and it was an afternoon spent pizza making instead. It was an absolutely lovely weekend and we really needed to have some family time.

Monday both kids were at nursery so I took the opportunity to have a good clean and do a ton of washing, very mundane but I got alot done. On Tuesday my Mum popped over and we had a lovely walk out in the crisp sunshine, it was so nice to have a frosty day. Wednesday it was another cold day...... over the road from us is a showground/arena, it is huge. For the past week we have been watching the workmen set up for a huge agricultural show called LAMMA (no idea what it stands for and still don't!). Alfie being Alfie has been so excited seeing all these tractors, combines, lorries and farm vehicles turning up so I decided to see if we could go in. I found that it was free to enter and we could so we spent an hour or so on Wednesday AND Thursday looking around, him and his little addiction to all things outdoors! He was also very chuffed to be given a little rubber tractor by one of the exhibitors, made his afternoon. It's been a lovely week, next week holds some big changes for me (longer days, longer journey but more money and an extra day off!), watch this space to see how I get on!

This was my week, how was yours?