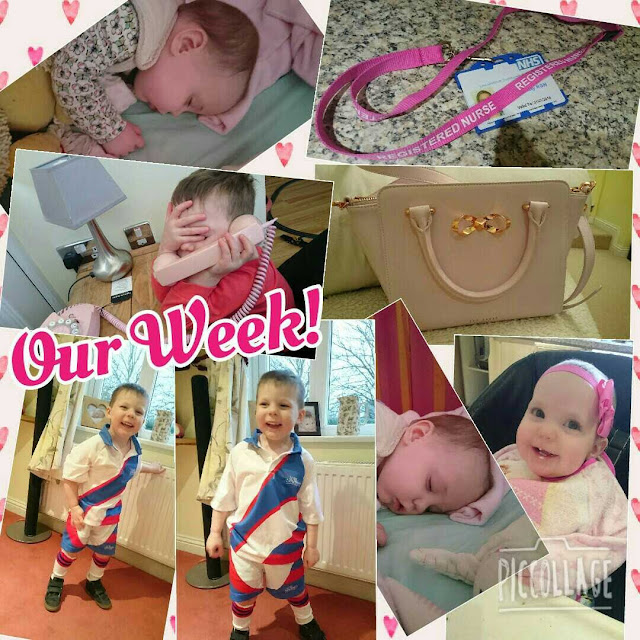 Well I've done it, I've survived the 1st week back at work and oh my god it's been a long slog. Funny how things turn out though....... I had a phone call on Monday inviting me for a job interview that I applied for a little while ago, I thought that I may as well attend and the end result was quite ironic. I got offered the job on the spot! I was quite taken aback actually as I hadn't banked on that at all so I then spent the rest of the day weighing up the pro's and cons about which job would be best for me and I'm hoping by the time you are reading this I will have made a decision. I'm fairly sure I know which one I am going for but needed to sleep on it just to be sure. Anyway that was the end of this week but last weekend was lovely.

Alfie had his first proper rugby session at Little Scrummers. He had his trials before Christmas but this is his first term. I was so pleased to get some nice pictures of him in his uniform (even though there was a small amount of bribery involved). He had a lovely time although he was not as keen to join in this week. After a couple of weeks from it he probably just needs to get back into the swing of it. Saturday night we had a lovely meal out for the bestest's birthday, it was a lovely local Italian restaurant and I was very happy to give the Baker (my Ted Baker bag my husband bought me for Christmas) its debut outing! Sunday was just a quiet day before my mammoth commute started to Lincoln (which is an absolutely horrendous place to drive through!).


The rest of the week was pretty quiet as I've been out for the majority of the day, the time I was at home though Alfie kept having some pretty serious conversations on his 'work' phone (my pink dial up phone that he loves) while Elarna just kept my spirits lifted with her gorgeous smiles.


Overall obviously not the best week but not the most horrendous and I'm glad it wasn't as awful as I thought it was going to be!


How has your week been?