Well I did it. I have officially managed to keep my 2nd child alive for almost 2 years. Yes.....go me, wahoo, small triumphs and all that! Well not just me obviously, my husband plays a fairly large part in this too! In all seriousness, how on earth is my daughter 2. It's that crappy cliche of time flying, it really has. I feel like I only just wrote her birth story and also her turning 1, but here we are 2 years down the line and the fun is about to begin! 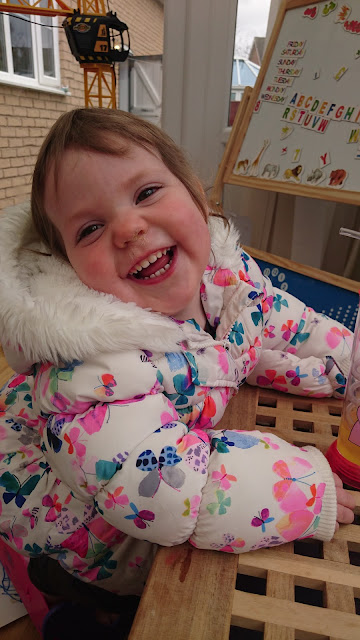 As Elarna is having her little operation on her actual birthday (the 15th, which by the time this goes live will be the day) we brought everything forward by a week. I hope to write a bit more about what's been happening with the operation in another post but I have been lacking in motivation somewhat for my blog that I haven't gotten around to writing it as yet. I digress, so we decided to bring her celebrations forward and ultimately she wouldn't know any different at this age. I got all her pressies wrapped ready for Saturday morning and a big balloon which seems to be a bit of a tradition in our house now for the kids! 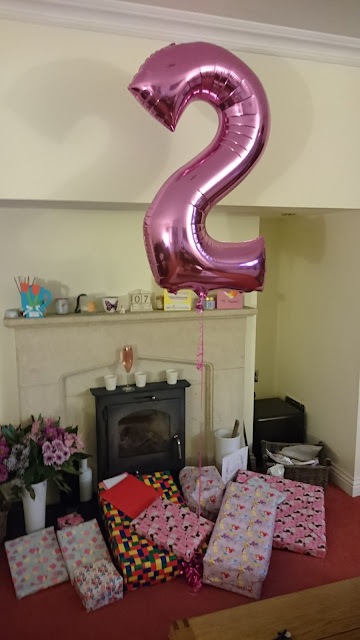 I struggled with what to get her, they both have so many flipping toys that I find it difficult to know what will be a hit but thankfully everything that she opened......well I say she, Alfie helped with the majority of opening the presents, he was so excited too. Everything that was opened was met with a 'wow' or an excited noise, it was incredibly sweet to watch. I always go overboard with presents, and every year I try to not spend too much but can't seem to help myself. 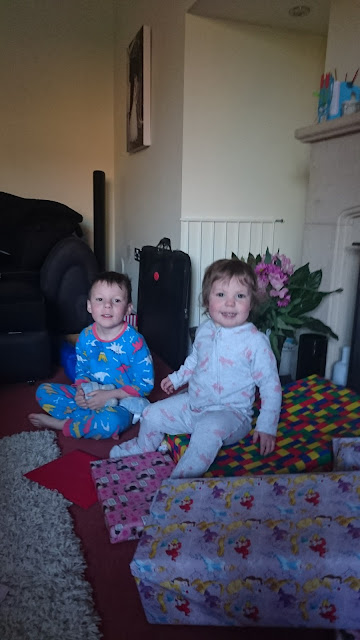 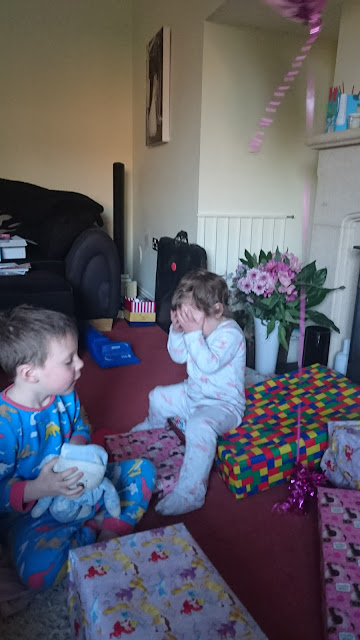 So what I choose for her? Well she loves scooting around and is pretty active like her brother so I chose a scuttlebug for her (huge hit), several books, some arty bits and pieces, a couple of outside play toys, some Shimmer and Shine toys and other little bits and pieces. She seemed thrilled with everything. Alfie had chosen her a 'little sister' bowl that matched his 'big brother' bowl and that also seemed to be a hit. 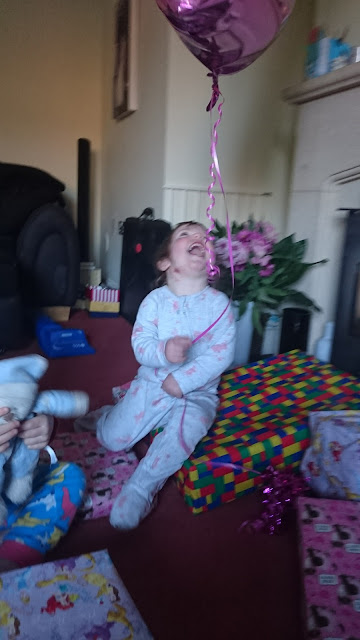 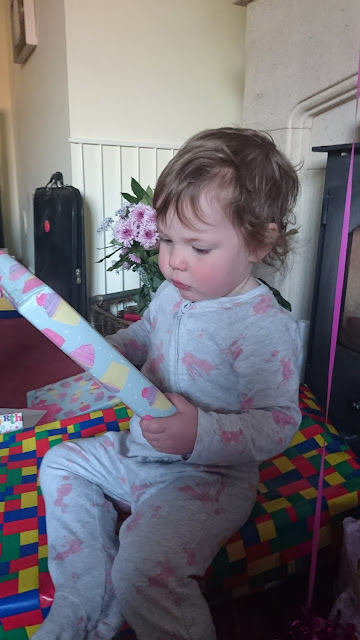 We had debated leaving pressies until the weekend of her birthday but to be honest we're not sure how she will be feeling so I'd rather that she enjoyed opening them before. We had a really nice, chilled all be it excited morning of drinking coffee, opening presents and both kids enjoying playing with the gifts. I was really pleased to see them both enjoying themselves. 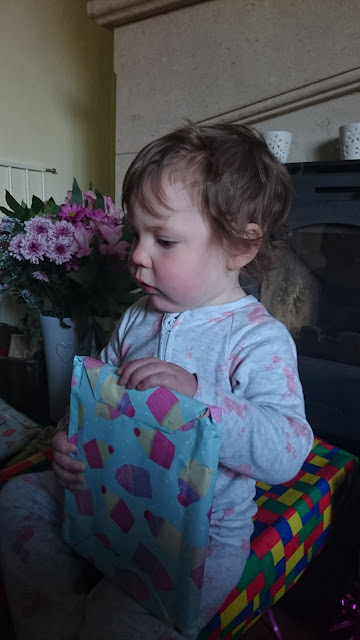 As Elarna's birthday is fairly close to Alfie's (end of May) it does seem to be a bit of an awkward one with arranging parties. Alfie is having a bigger party with one of his friends from school so we decided to keep Elarna's fairly small with family and close friends. I've been feeling a little stressed about her op so didn't want to have to arrange a huge gathering and we invited just a handful of people and it was a really lovely afternoon. Pretty laid back, with simple food, some booze and gorgeous weather so the kids could head outside and burn off some energy. 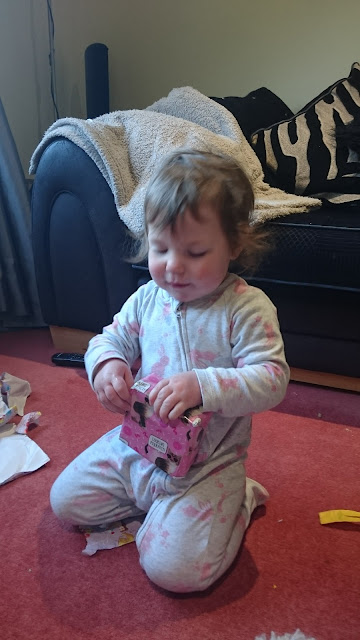 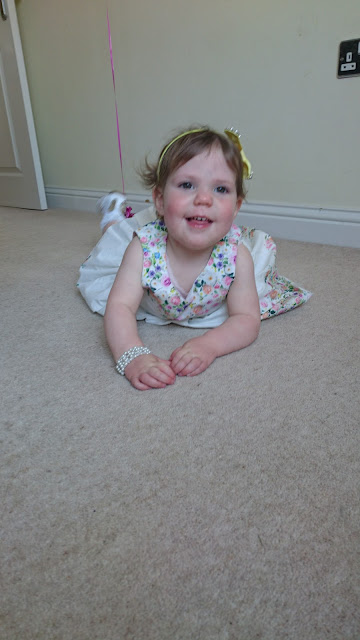 Naturally, I had her party outfit organised ages ago!! Why I chose white I do not know. It didn't stay white for long and she had a 2nd outfit change later in the day......most divas have more than 1 outfit on a birthday of course! I fell in love with this floral dress from Mothercare a few weeks ago, it wasn't cheap but I knew as soon as I saw it I had to have it for her. I added this cute lemon headband (it didn't stay on long), some frilly socks and these utterly gorgeous butterfly backed shoes from Next. Elarna randomly found a pearl bobble which is one of mine and decided to wear it as a bracelet......who am I to stop her! I think it looks adorable. Like I said though, didn't stay white for long! 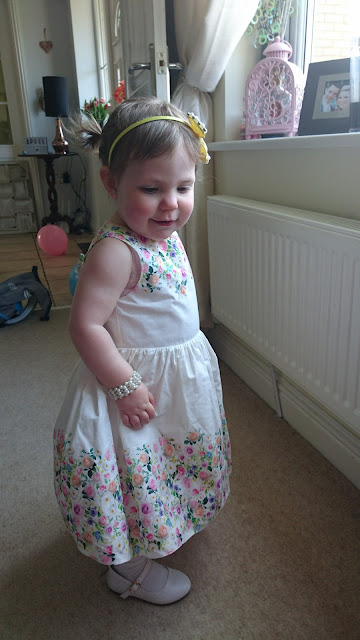 I've added several photos of her below having lots of fun before everyone arrived. She was going absolutely nuts with the balloons and bubbles that I'd left around the house. It made for some cute pictures, I think I need to work on my action shots though! She's so speedy it's hard to get her to pose. 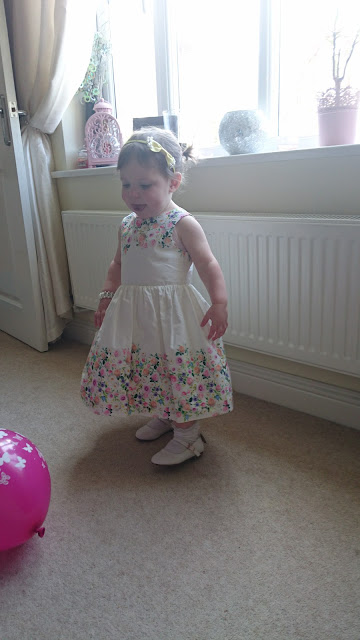 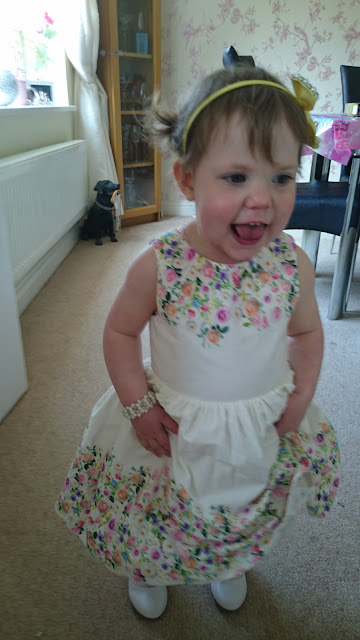 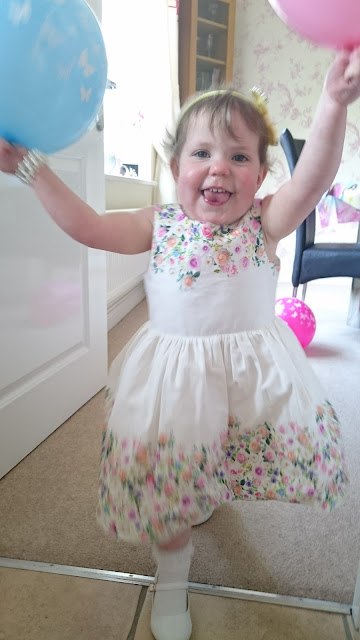 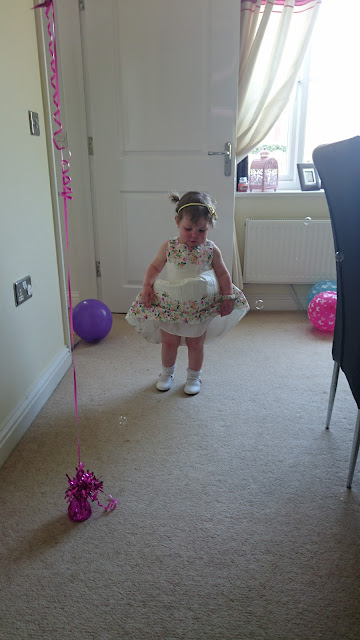 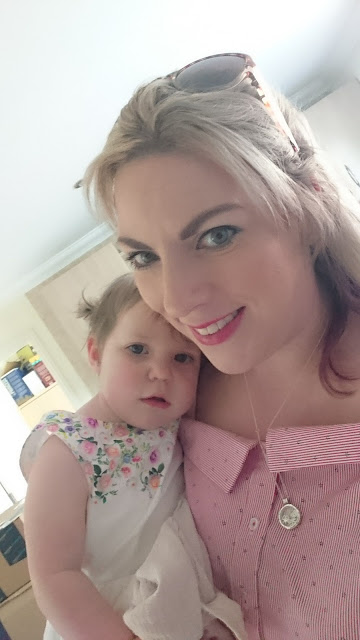 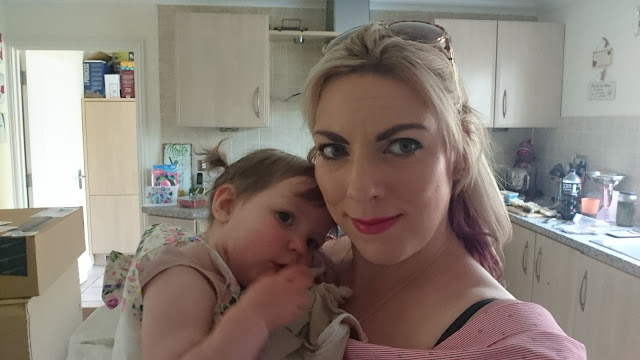 I had this amazing cake made for her by one of my lovely Mum friends, Hannah who runs For Goodness Cake has recently taken the plunge and gone into full time cake maker extraordinaire and I think you'll agree the cake looks amazing, it also tasted yummy to. Go check out her page, especially if you're local to the Peterborough area. 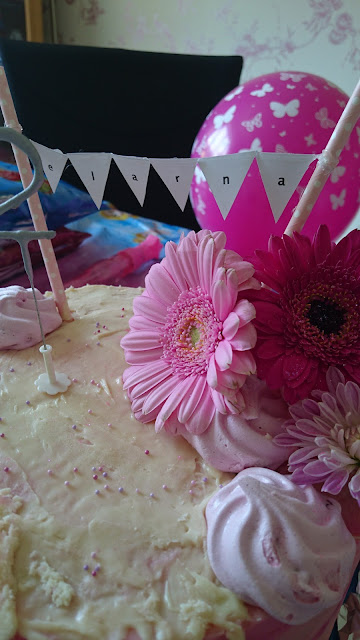 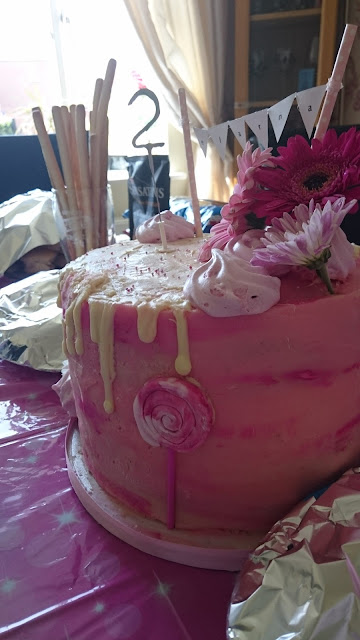 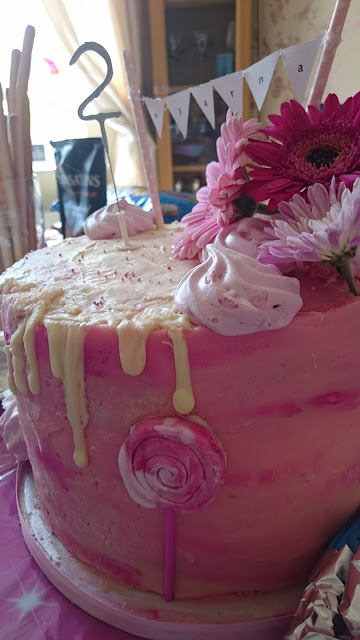 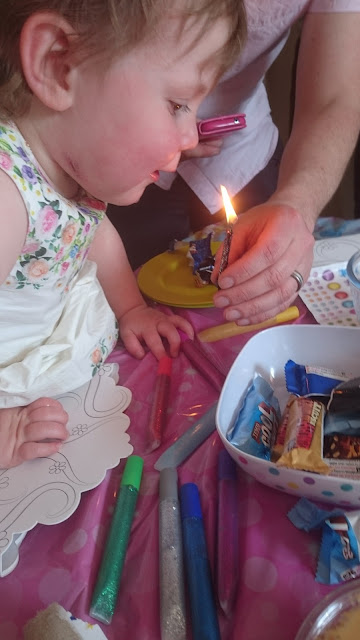 We had a lovely afternoon, as I said the weather was amazing and it was so nice to see everyone, there were a couple of our friends that couldn't make it and of course they were missed. I think it's safe to say Elarna very much enjoyed her birthday party and was completely oblivious that it was her pretend birthday. 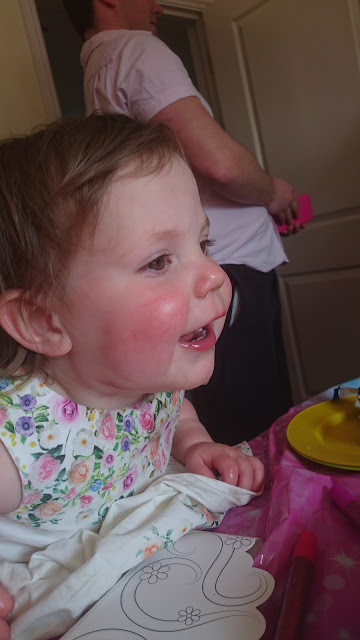 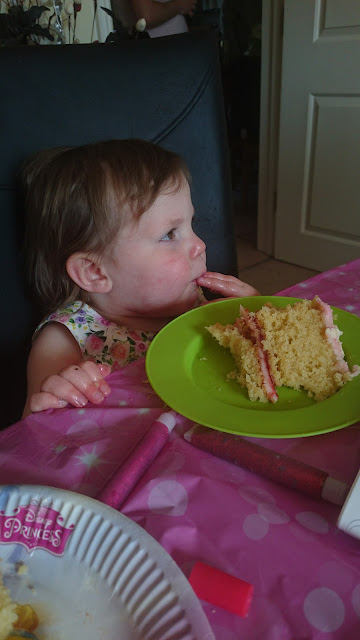 So Happy Birthday my sweet little Princess! Here's to the  next year. Oh and the terrible two's.......do you detect a tone of sarcasm there?!
Posted by Helen - Blogging Beautifully at 5:30 am