Well it has been rather a lovely week. A varied, mixed and happy week I am pleased to report. After leaving work last Wednesday I took the Thursday and Friday off before starting me job on Monday. I had a quiet couple of days as which was needed. It did feel all a bit weird to be off technically unemployed for a couple of days!

On Saturday we were off to meet our fab friends Sarah from RunJumpScrap Chris, the grem and little peewee, I was just a little excited for baby snuggles! It's been a while since we'd seen them all so I was looking forward to spending the day with them at The National Space Centre in Leicester which is an hour away for both of us so it worked out perfectly! Alfie and the grem are very much into space and the planets so it was a fab place for them to visit. We were also luck enough to get a free annual pass, which is a good job really as Sarah and I didn't see half of it through the youngest ones keeping us busy and us nattering away. From what I did see though it was really interesting and very interactive so for the kiddies was great. There was alot of information to take in so I'm sure that if we go over again there will be lots more to see and learn.

After we'd parted ways Adi and I decided to grab some dinner, we were initially going to pop to a chain restaurant and then thought why don't we stop at one of our local country pubs......so we did just that and it was delicious! The kids were pretty well behaved up till the last 0 minutes but otherwise they were fab. I tell you what we all slept well after that! 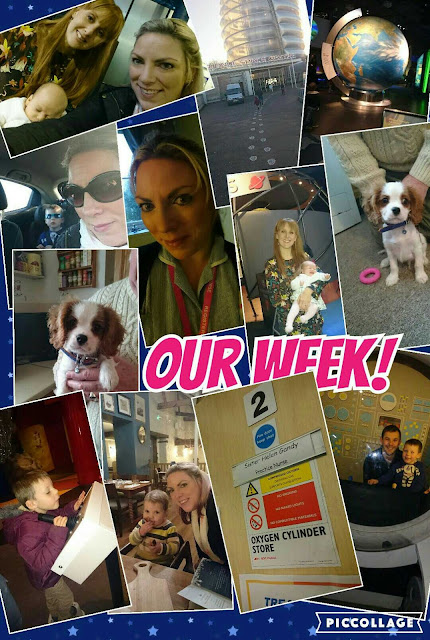 On Sunday we saw friends in the morning which was great to have a catch up, sometimes it's just nice to have a coffee and chat while the kids entertain each other!

On Monday I had the start of my new job, cue first day nerves and all that. It went ok, appeared to be very different to my past surgery but too early to tell how much I'll enjoy it. I was thrown in at the deep end with a clinic at the end of the day. I got home and was a bit deflated about things though, not too sure why but I was a bit worried that I'd made the wrong choice. Tuesday went better, although I kind of just got on with things and didn't really see many people but did have a few patients to see which was nice.

I've had Wednesday and Thursday off which has been lovely. On Wednesday I went over to Rockingham and the big Joules sales. I love the brand Joules so was looking forward to picking up some bargains. I had to drop Alfie off at school and the sale opened at 11am so I aimed to leave the house not long after dropping Alfie off. I got there for bang on 11 and there was already quite a big queue. After 90 minutes of waiting in the freezing cold with Elarna I did get in. It was ok, perhaps not as great as I was hoping as there wasn't a huge amount of sizes for Alfie and Elarna's ages but I did manage to grab a few things.

Thursday was my Dads 70th birthday, I couldn't quite believe it, a few years ago I didn't think we'd see him at this age so I had a lovely couple of hours with him, Elarna and Lenny before heading back home for the rest of the afternoon. The rest of the day I was on a bit of a cleaning mission, I hoovered, steamed, sorted out our tip of a study, cleaned the toilets and did a whole load of filing! Fairly productive day I'd say! I'm exhausted just writing about it.

So this is what I've been up to, what have you been up to?
Posted by Helen - Blogging Beautifully at 6:00 am