Another week and I'm a little late with my 'our week' post, oops. For my roundup post this week I couldn't quite decide what to do. Should I label it 'our week' as I usually do or focus more on Alfie's birthday and party, so I decided to roll it into one and chat about it all, well mostly Alfie's birthday and party as the rest of the week has been pretty nondescript.

I did a brief post on Alfie's actual post but didn't go into any detail surrounding the day and his party. So let me go back to last Thursday, the 26th May. Alfie was soooo excited that it was his birthday, I can't quite get over just how much he was looking forward to it, every night probably for about 6 weeks he's been asking us if it's his birthday the next day, bless him. I had to be quite organised as I was actually working the day before so wrapped everything up a couple of day prior to his birthday. This year we actually did something a little different and we let him choose a few things that he wanted. Now I bet you are thinking we are mad and I admit when my husband suggested taking him around Toys R Us to choose my mouth dropped open, this could only go a couple of ways........terribly or really bad. Surprisingly it went ok, Alfie understood that he was only allowed to pick a handful of things and they were specifically for his birthday. 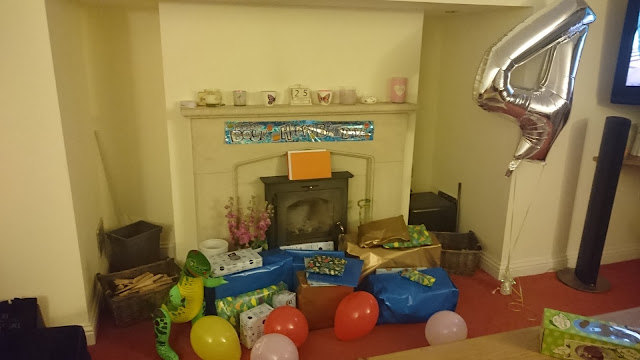 Amongst the gifts Alfie chose were his usual selection of construction vehicles (like we didn't have enough already!),  for the price these are excellent and provide hours of amusement, these are probably his most used toys. He also chose a selection of animals and a couple of jigsaws too. We did of course buy him a few surprises, I got him a little sports day kit as he really enjoyed his sports day at nursery, I also chose him a few clothes (which actually I forgot about until I found them at the bottom of my wardrobe, oops!), there was also some Lego, crocodile dentist and a lovely selection of books - particularly Julia Donaldson as these are our fave's! Elarna also gave him a rather lovely ceramic breakfast bowl with 'big brother' engraved the on the front. 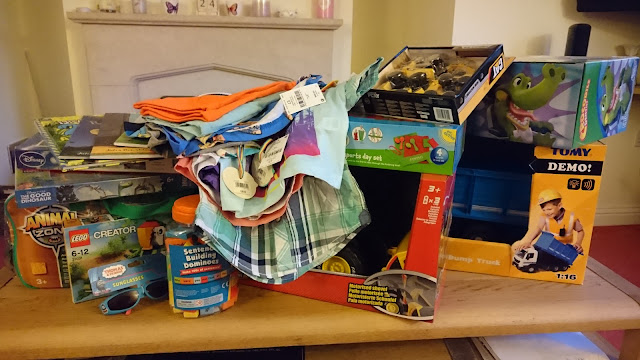 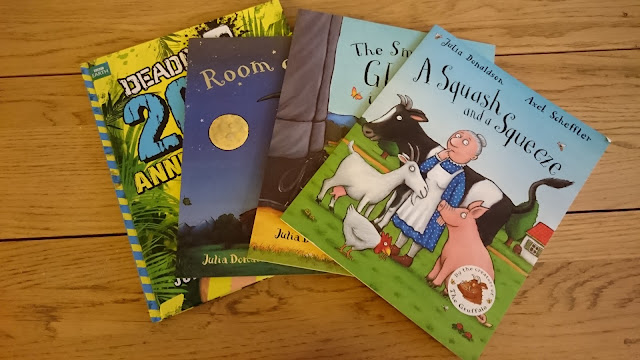 Every year I say that I don't want to go over the top and buy tons and every year I fail spectacularly! I love treating the kids, in my eyes it's not spoiling it's me spending my money that I work hard for on my children to see the happiness and delight on their face and I would rather they were happy and content than me. This year I did try to restrict the pressies to things that I knew he would use and I think so far they were all good choices. Alfie was so excited when he came downstairs, I think he was just pleased that finally it was his birthday! I'd decorated the stairs and living room with banners and balloons and that added to his excitement! He seemed to take quite a long time to open everything so we had to gently hurry him up as were heading to Woburn for the day (review to come soon). We had a lovely day, in fact I've had the best week or so for a while, it's just been so lovely to spend time with the kiddies and hubby. 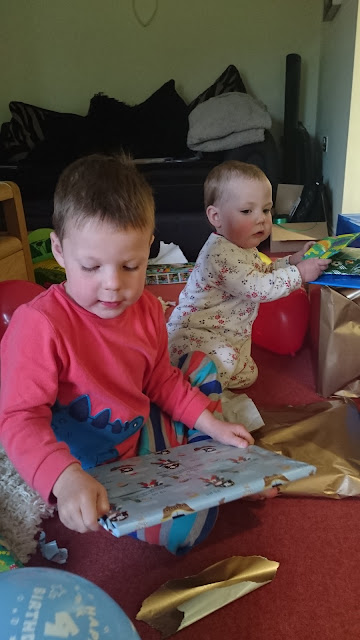 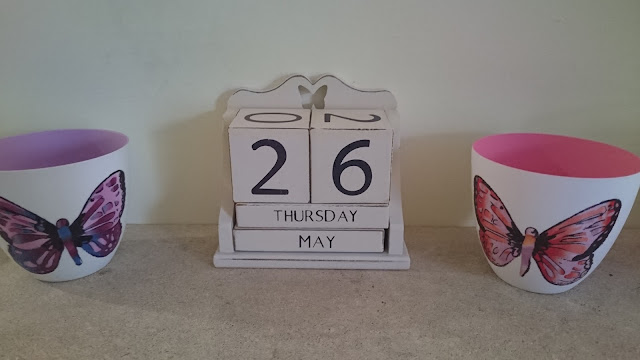 Friday was party prep day as I mentioned last week. Other than tidying I had to organise party bags, sweet cones, cookies and dirt pots......yes dirt pots you read that right. Over the last couple of weeks I have been scouring pinterest for some simple but cool ideas for Alfie's dinosaur themed party. I love pinterest, it's a completely random place but full of amazing ideas and I found a couple of fab ideas that I thought I could manage, and actually they were very simple and turned out well. I made these little dinosaur cookies that are supposed to resemble Arlo from the Good Dinosaurs feet. Really simple to make, just a basic biscuit mix flavoured with vanilla and a dash of green food colouring, I think I could have added a bit more food colouring but I was really pleased with how they turned out. 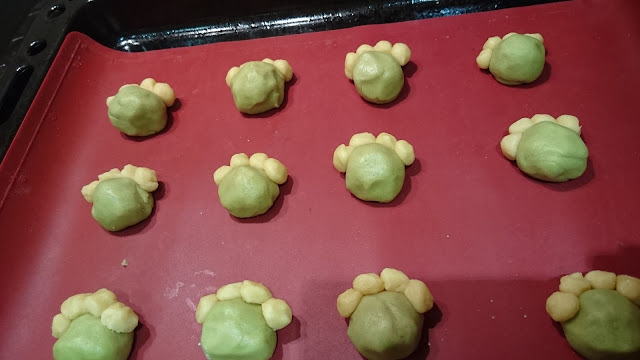 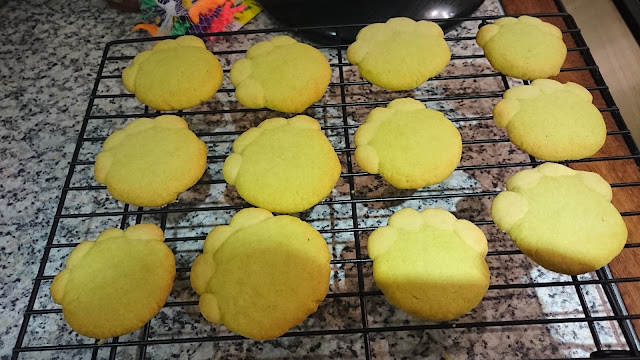 I then made these dino dirt pots. These were fun to make but I guess quite pricey in the grand scheme of things, they were well received by everyone though! I could have done with using smaller tumblers as these were quite big but never mind. These are literally a layer of crushed oreos, then chocolate mousse, more oreos and then mousse, they a jelly worm, more oreos and topped with a little plastic dinosaur and edible chocolate pebbles. I thought they looked really quite cool and the kids loved them. 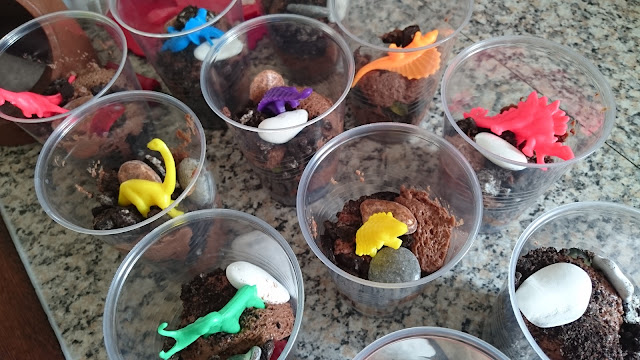 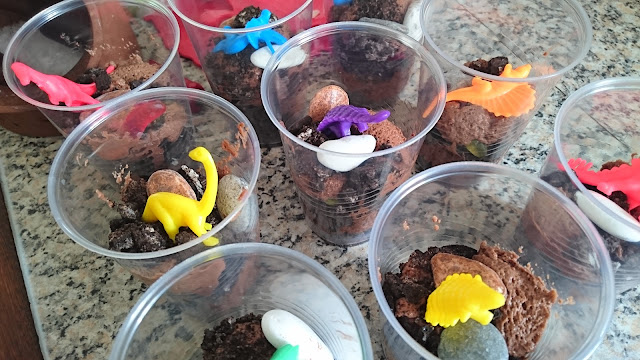 I then made some sweetie cones, I wanted to keep a bit of a green theme going to tried to fill with as many green sweets as I could with a mix of white, I enjoyed making these, I got the little personalised stickers of Ebay as an extra touch. I was initially going to just hand these out as party gifts but hubby suggested that not all parents would thank me for this so decided to make some party bags as well. 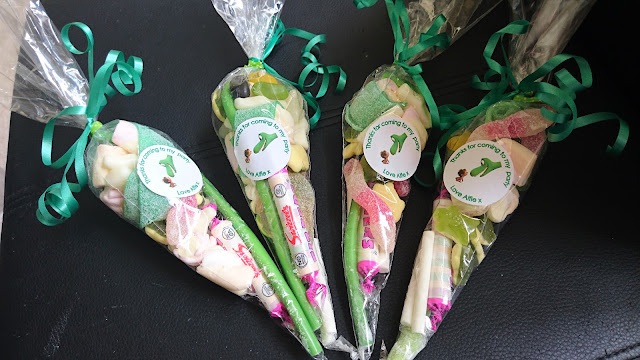 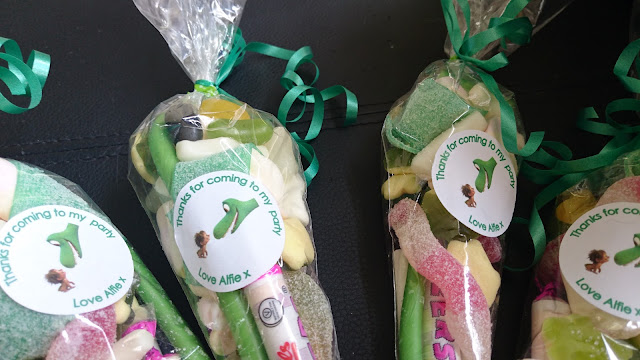 In the party bags I filled with a mini colouring book, some crayons, a dino glider and a cute little animal slider puzzle. I found this great website called party delights which had everything I needed to fill them with for a reasonable price. I would probably say that in total the party bag and sweetie cone cost around £5.00 give or take a few pennies either way, I haven't properly added it up. I have no idea whether this is good or bad but hopefully they were well received. 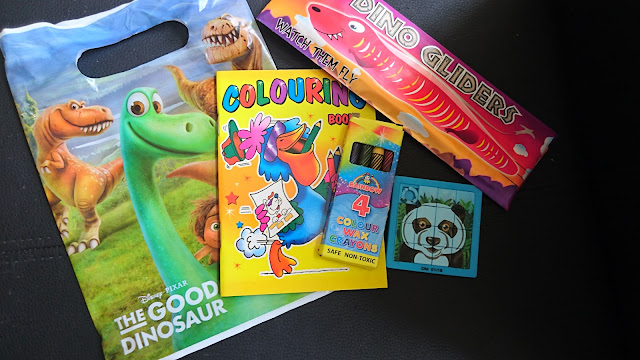 We also paid for a dino bouncy castle. This cost £85.00 and was ours until the next day. This was without a doubt the best bit of money spent for the entire weekend. The kids just loved it, I mean they just do don't they.......what child (and adult) doesn't love a good bounce. I don't think I saw it empty, there was pretty much a child on it at all time. We even managed to get some bouncing done the next day too so we really got our moneys worth, we ordered this through a local company who were great, ever so efficient and it was inflated within seconds! 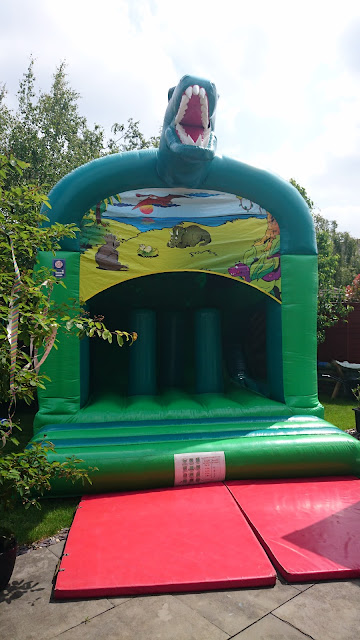 I was hoping and praying for dry weather and thankfully it was.....and actually lovely and warm! I was hoping it was dry for not only the use of the bouncy castle but also for everyone to be outside rather than in so that the tidying up was less! I decorated the garden, although you can't really see too much of it but I put up some colourful bunting, blew up sooo many yellow and green balloons and dotted them all around the front and back garden, I had streamers in the trees, an inflatable dino and flamingo (no reason for the flamingo other than I liked it, ha!) and I had some colourful lanterns in the trees, it looked quite nice! Brightened up the garden a bit, so much so that I'm on the look out for some proper garden bunting to go with the pink and green that I already have. We also put a gazebo up and had a couple of blankets out so that people could sit and chill. Funnily enough we have a big wooden table at the back of the garden but noone sat round it which I thought was a bit strange but never mind, everyone just found there own place to get comfortable. 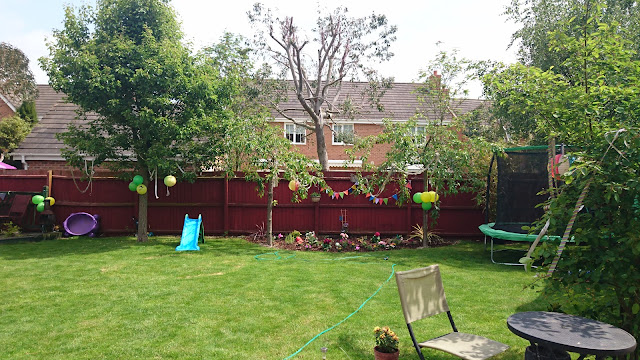 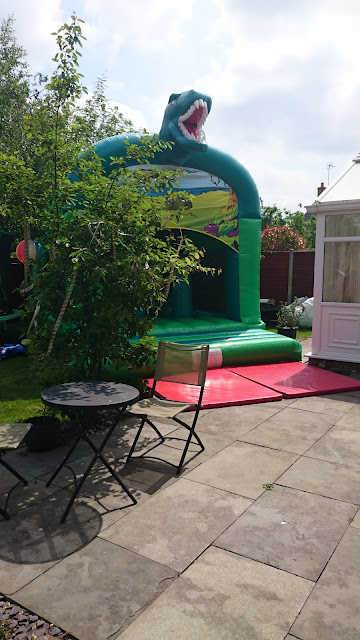 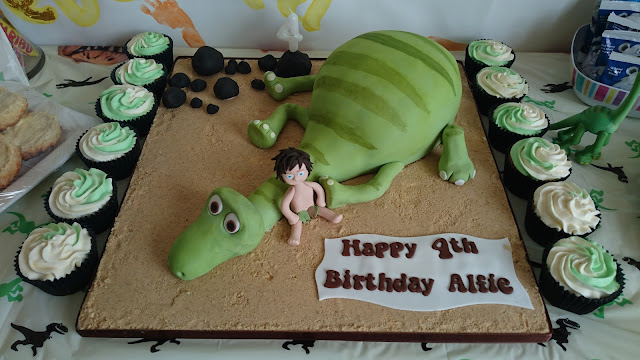 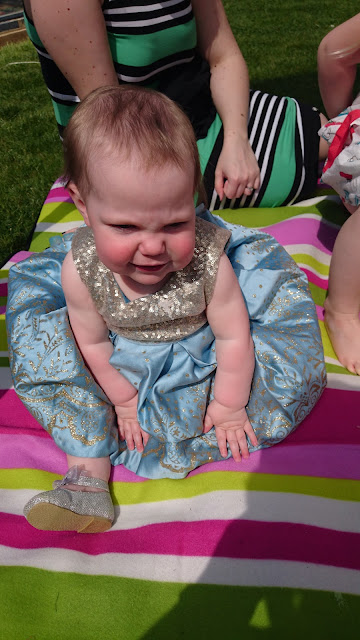 As well as inviting our close friends and family I decided to take the opportunity to invite a few lovely local bloggers that I chat to regularly. When I first started to blog I had no clue just how big blogging is and I definitely didn't think a couple of years after starting that I'd meet some lovely and like minded people. My good friend Sarah who blogs at run jump scrap was coming anyway so it was great to have the lovely Sam from clicks and giggles and the equally as lovely Leslie from messyblog. It was fab to meet them and I hope we can meet up again soon as I didn't get alot of chance to chat properly as I was flitting everywhere, while making sure I had a full wine glass........ahem. It really was lovely to put names to faces. 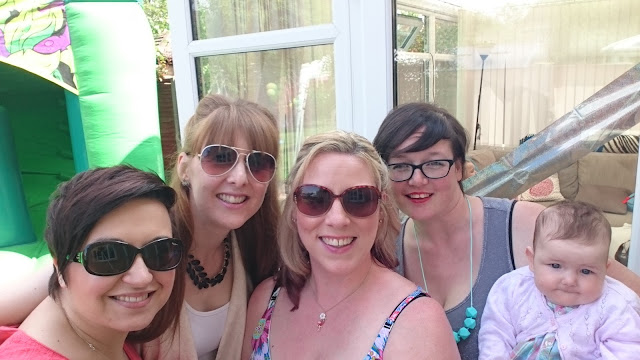 As I'd mentioned in a previous post when deciding on the good dinosaur theme I knew of the lady I wanted to make Alfie's cake, Tiger Lily Cupcake ironically in Suffolk where we used to live! She was so good last year that I was willing to travel (or rather hubby was) and thankfully she did another fantastic job and Alfie was delighted with his Arlo and Spot cake. Tasted pretty good too! 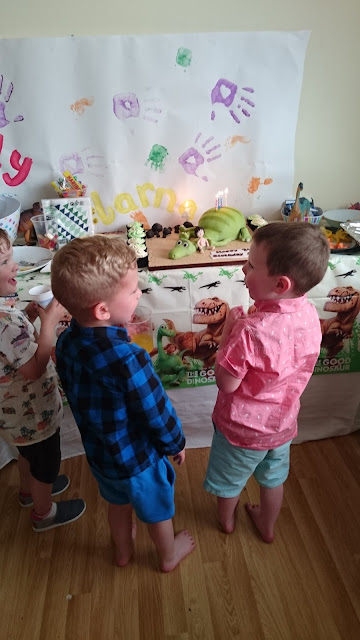 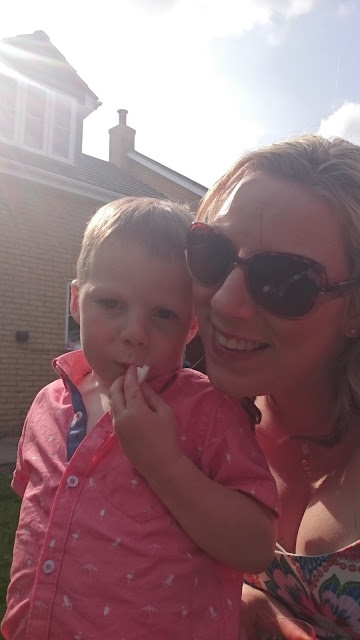 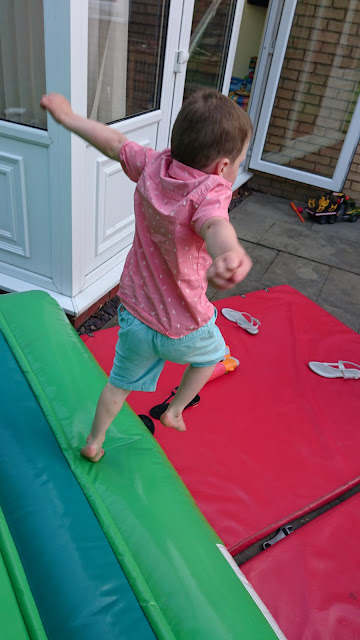 We had a truly fantastic day, I was over the moon that Alfie had such a great day, he was absolutely shattered come 7pm to the point that he was just being a loon, he doesn't often appear overtired, and I really dislike the term but he was definitely just that. Once he was tucked up in bed and our friends little boy was aswell it was time to crack open another bottle of wine, get a take away and have a right laugh playing pieface! If you haven't played I urge you to do so.......hilarious. 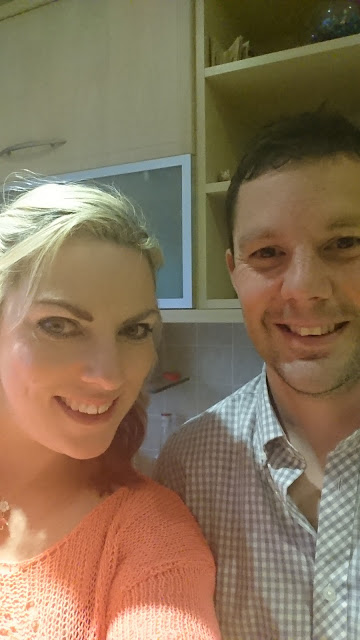 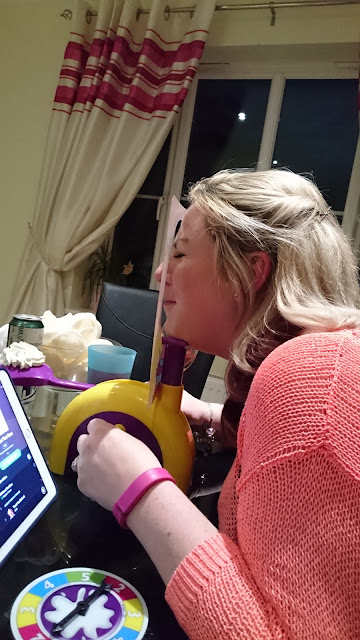 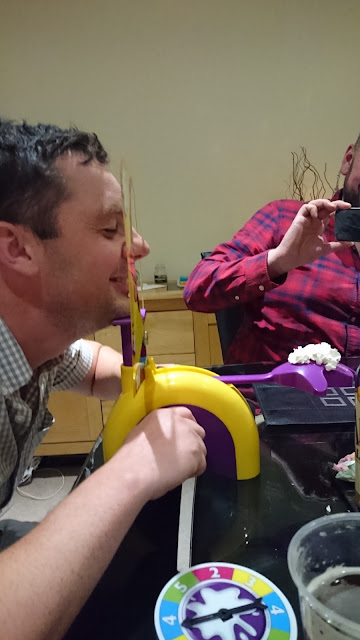 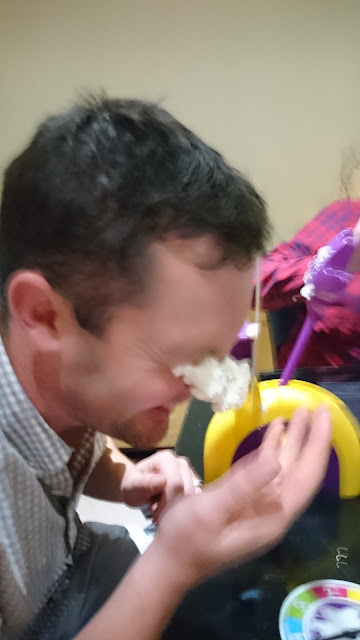 Sunday rolled around and I think I had about 4 1/2 hours sleep. Not that we went to bed overly late but when I have a few glasses of booze these days I sleep terribly. My mind seems to comes awake, I toss and turn and can't seem to get a decent sleep. Needless to say I woke on Sunday feeling knackered and Alfie was as usual a bundle of energy. He may have been full of beans but oh my goodness come later in the day he was grumpy, the late night (it was eventually coming up to 8:30pm when he went to sleep) clearly did him no good, he was such a whinge monster and in the end we just sat quietly on the sofa and cuddled for a couple of hours in the afternoon (I may have nodded off, oops). It was most definitely an early to bed night! 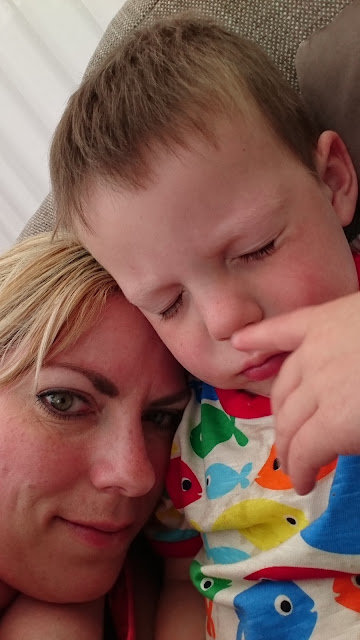 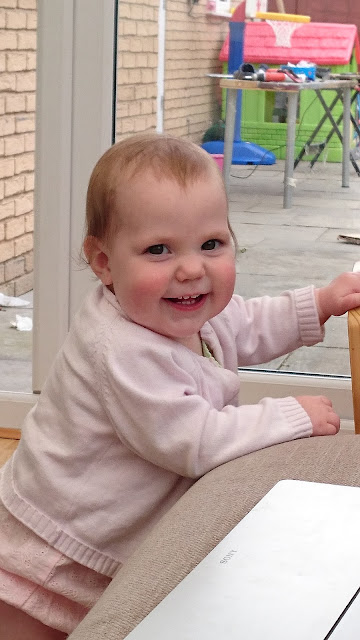 So as you can see we had quite the busy week. I think it's taken me the rest of the week to catch up and recover myself. I'm very much looking forward to seeing what the next year holds for us now Alfie is four, lots of new things in the pipeline for us and him. Here's to the next year - oh and the next week because this post is about the past week after all!
Posted by Helen - Blogging Beautifully at 10:40 pm