There is nothing better than home made ice cream, it's gorgeous and actually surprisingly easy and quick to make (even quicker if you go all 'Heston' and use dry ice!).

My first bit of advice would be to invest in an ice cream machine if you can, it just helps with the churning part, although you can of course do it manually it just takes a bit longer.

I have the Kenwood IM200 which you can buy from Amazon for £24.50 so it's a great investment.  Not only does it make ice cream but can also churn out a nice sorbet too. The one thing about making homemade ice cream is the fun of being able to experiment and you can whip up nice ice cream really quite quickly. 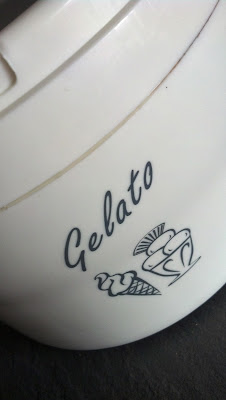 My suggestion would be make sure the bowl that you churn the ice cream in has been frozen for 24 hours prior to using and also make sure the ingredients are fully chilled. Anyway, enough yapping you want to see the good stuff!

1. Place the egg yolks and sugar in a glass bowl and beat together well.

2. In a pan add the milk, vanilla seeds and pod and slowly bring the milk to boiling point. Remove the vanilla pod and then pour onto the egg mixture beating together.

3. Return the mixture to the pan and stir constantly. You want it to thicken up (it will still be liquidy but you'll see that it does thicken), you want the mixture to form a film over the back of a metal spoon.  DO NOT let it boil else the mixture will separate and that would be a disaster!

4. Remove from the heat and leave until fully cold (on a hot day it's worth putting it in the fridge to help with the cooling process)

5. Once cold, stir in the cream. This is usually where you would add this liquid to the machine but I've found that actually, it's better to start it off in the freezer for an hour or two before adding to the machine to churn. I find it just helps the churning process along a little bit.

6. Once chilled for a couple of hours (it will still be at a consistency where you can pour, almost like melted ice cream), put the machine on with the paddle running, pour the ice cream into the machine and allow to churn until it reaches the desired consistency.

7. While churning put the raspberries, sugar and water in a pan and bring to the boil, simmer for about 10 minutes until all the raspberries have broken down. Once all the fruit has broken down sieve into a bowl to make the sauce smooth, return to the pan and simmer until it's a thick syrup, allow to cool and put aside until the ice cream is ready. 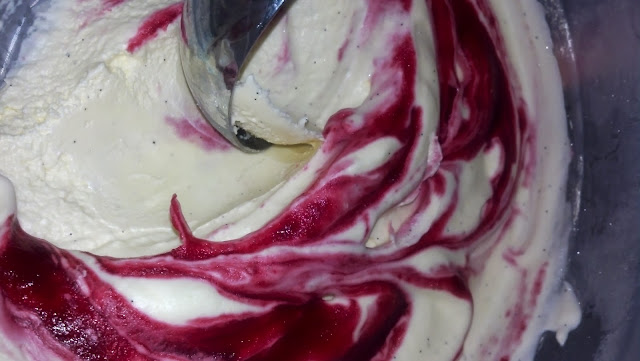 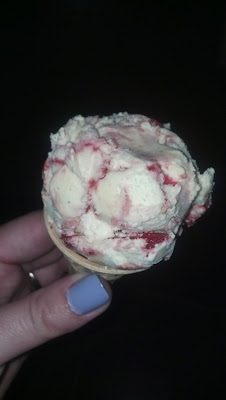 Sorry for the lack of pictures, when it's hot you have to work quite quickly making the ice cream, the end result is much more exciting though wouldn't you agree? :-)

Has anyone got any nice ice cream flavours they particularly like?

Helly's Top Tips: Ensure that the bowl from the machine is fully frozen. The churning is to ensure that no ice crystals develop, if making it by hand once in the freezer it's best to give it a good stir every 30 minutes to stop any crystals developing, do this until it's frozen. Experiment and have fun with different flavours.