It's funny how things happen. I've always said that I'm a strong believer in fate and what will be will be. Every night I go to bed and hope that we all wake in the morning, we continue to be happy and healthy and get through the day. A couple of weeks ago I was reminded to love life and be grateful for everything. It sounds a cliche but it did make me wake up and smell the coffee.

It was a very normal day on Thursday 2nd March 2017. Nothing remarkable or anything outstanding, a normal day. My husband was working in London. It was world book day at school for Alfie.  He was going as 'The Smartest Giant in Town' and I'd typically left things until last minute and wasn't very organised. Elarna was, well just being Elarna. The  food shopping was booked for delivery later in the day and I was feeling quite relaxed as I'd done alot of cleaning the day before and the house was looking pretty tidy and clean. I didn't have much planned and was looking forward to that prospect. It was going to be a quiet and fairly mundane day. How wrong was I.......... 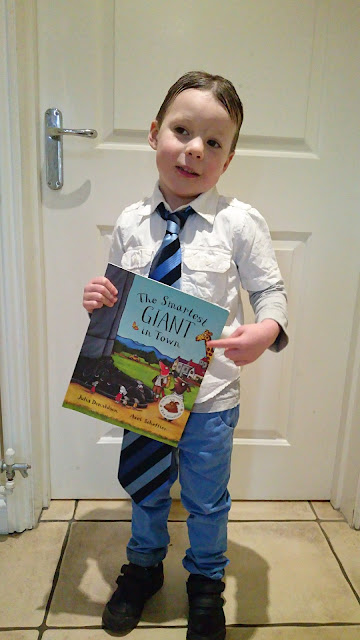 I've been missing some paperwork since starting my new job and it's been bugging me as I knew I'd seen it before Christmas, I was sure it was in the study. I'd been putting off trying to find it as the study was a complete and utter tip. It's fair to say my husband isn't the tidiest, although according to him it's organised mess but in my eyes it was like a tornado had happened. Anyway, on a whim I decided that I should probably try and find this bloody paperwork so thought I'd have a look through the study to see if I could track it down. Guess what......I didn't find it. While in the study,  for some reason I thought it would be a great idea to hoover the floor as it was grim. It's ironic really that usually I just tend to shut the door and forget about the mess.  Like I said, it's my husbands domain and on principal I very rarely go in there but good god it did need a tidy. I decided to whip the hoover around quickly while I had some time, after all it would only take a few minutes. Elarna had been pottering around the room with me and while I was hoovering she found a couple of toys to keep herself entertained. I finished in the room and shut the door, seeing as I was upstairs I thought I may as well vacuum the rest of the rooms........perhaps I should have just not hoovered at all. 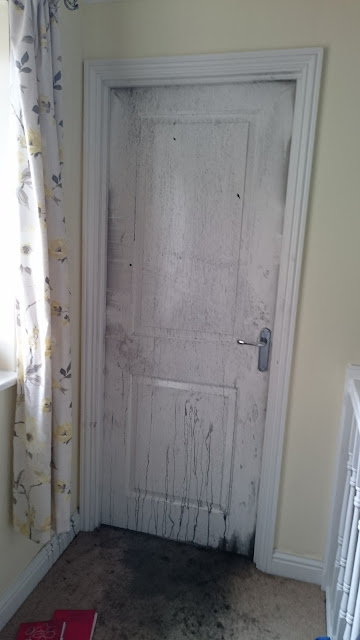 The smoke alarm went off. It's pretty loud and I heard it over the hoover. Weird I thought, why the hell is the damn smoke alarm going off. Shit......I could see smoke, but where from? I turn the smoke alarm off, quickly open the windows but yet more smoke.......where the hell is it coming from, oh and the smell. The smell is going to stay with me for a long time. Just writing about this is actually making me feel funny, I've kind of pushed it to the back of mind so reliving it isn't fun. The smoke alarm was still going off and yet more smoke. At this point *realisation dawned*....... fire. Shit. I looked towards the study and saw plumes of black smoke coming from the sides of the door. I felt a bit sick. Elarna was now crying alot and the smoke alarm seemed so loud, *beep beep beep beep beep beep* it just kept beeping. Good thing it worked really....... Stupidly, I opened the study door, the handle wasn't hot........ within a split second of opening the door, about 30 centimetres and I saw flames, actual flames. I felt heat. I smelt smoke, again the smell is going to stay with me for quite some time. The flames were about a foot high, red and orange angrily flickering at me, not quite roaring but enough to make my heart pound and slam the door and run. Elarna was still crying and I could feel panic rising, I grabbed Elarna, my phone and legged it as fast I could out the house picking up (rather randomly) my house keys on the way out. I was shaking like a leaf, I remember feeling petrified and trying to dial 999 but I was shaking so much that my fingers wouldn't work. After a couple attempts of trying I took a deep breath and  gave myself a kick up the arse to calm down and breathe and called 999. 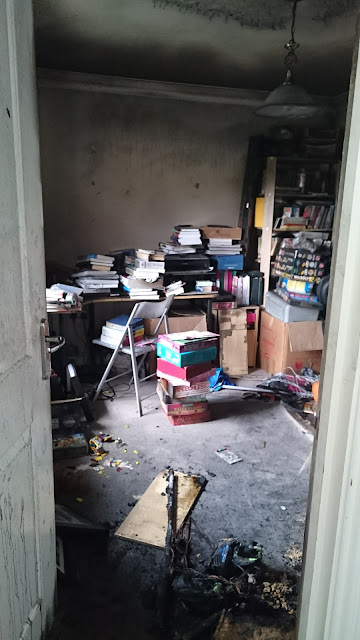 It's all a bit of a blur, I know I was panicking and the guy on the end of the phone was great and did try and keep me calm but seeing plumes of black smoke coming through the windows really did make me stress. The fire engine seemed to take forever to arrive and I suspect realistically it was less than 10 minutes but it felt like hours. Plus my arm was killing me from where I was carrying Elarna, she' a right lump now! I remember the call handler asking me if I could see flames or smoke, I could only see smoke but it was so black and kept coming, I was thinking this is really bad, f*ck. He kept asking me about if we had any pets, oh god the cats I couldn't remember where I'd seen them last, I was fairly sure that they were out but I couldn't be sure, then there was the hamster but she was downstairs so should be ok........then my neighbour turned up and actually I was relieved to have someone with me while waiting for the firemen. After finishing my call with the guy on the phone I remember ringing Adi and pretty much yelling down the phone that there was a fire and he needed to come home, I rang my parents and my in - laws to come, they were literally down the road. The next few minutes were a blur, 2 fire engines raced around the corner with about 8 firemen on then, all rather nice guys I may add! As soon as they got here they jumped into action and I can't recall much apart from sitting in the back of a fire engine with Elarna shivering and some very friendly fire men chatting to me, asking me what I thought started the fire and if I wanted an ambulance or some oxygen (which I didn't!).

I was trying to rack  my brains as to what had happened. It's weird, you go over things again and again and again and try to recall what you did and what it could have been. I thought I knew. My husband has been doing alot or DIY recently, he's been busy doing our en suite up and as such there are a few tools left around. As he's generally the only one that goes into the study he'd left his heat gun in there, I remember seeing it on the floor and thinking why has he left that there and I moved it out the way while hoovering, Elarna was also in that area from what I remember. So what I THINK happened, and I can't be sure and I guess never will be but it's 1 of 2 things. I either caught the on button with the hoover or Elarna switched it on without me noticing. There are valuable lessons to be learned!! 1/ don't leave dangerous items around! 2/ be  more aware of what I'm doing and what my child is doing! 3/ Possibly more important, check your smoke alarms!!!! If I hadn't been alerted to smoke via the alarms things could have been so much worse.  I was also told by the firemen that I had done exactly the right thing by shutting the door and getting out the property, if I hadn't have shut the door things would have been a hell of a lot worse. There is noone to blame or point the finger, just a series of unfortunate events. 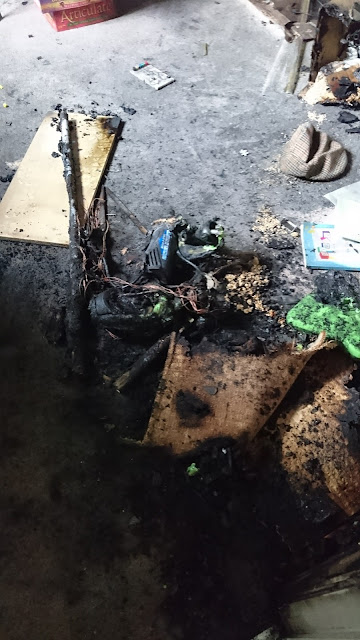 On entering back in the house after the fire had been put out the stench of smoke knocked me for 6. Wow, nothing can prepare you for that, the whole house was literally consumed with this cloying, acrid smell, horrible. It gets to the back of your throat, it makes you feel thirsty, like you've smoked about 50 fags. Disgusting. Then you have to comprehend the damage. The firemen had obviously prepared me for the state of the room and I don't think the photos do it justice. Everything is ruined. It's not necessarily what has been burnt.....it's the smoke damage that's the sod, that and water damage. We were lucky not to have anything more burnt completely, other than a teddy bear (RIP Biggles) and sadly Elarna's 1st sleepsuit, which I'm trying not to dwell on (luckily her little hat was ok and Alfie's was just sooty and I have managed to wash both so they are fine now) but pretty much everything that was in the room has an element of damage and is having to be disposed of. The important things I have managed to safe and I'm so pleased are the kids birth certificates, red books and Alfie's recent school achievements and certificates (phew). 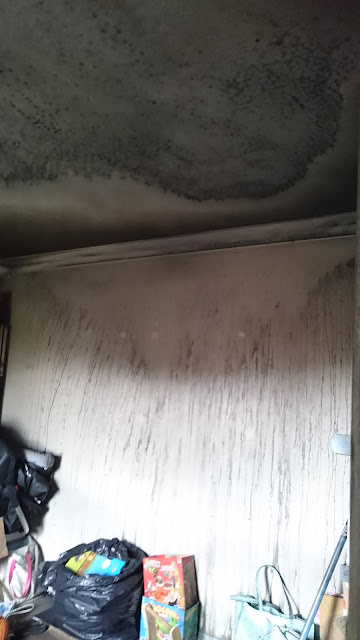 It's funny, lots of people have said it's only stuff and it can be replaced. Yes, yes it can but that still doesn't help feeling a little bit of sadness at seeing my beloved books that I've collected over the years being skipped, or family games that come out at Christmas all with warped boxes and coated in a layer of smoke damage. The new printer that we haven't had that long gone, my mint green Ted Baker shopping bag trashed and all my years of uni work stinky and singed. Photos have been salvaged but they will long have the scent of smoke on them, a stark reminder of what's happened. The baby car seat, the baby chair and playmat that were being stored in there, gone. Tons of dvd's and mounds of paperwork.....gone. So yes, it can all be replaced but it's still OUR stuff that we are having to bin. It doesn't feel great.  It's not just a case of dusting it off, the smell remains in the stuff and actually it's really hard to get rid of soot mixed with water. I managed to clean up all the kids certificates but they seem to still have a film over them, yuck. 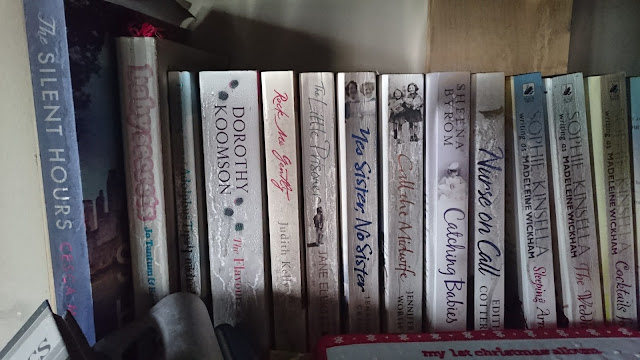 Tomorrow is a new day. We are trying not to dwell on it because it's happened and that's life, it sometimes deals you a curveball. It has taught us to be much more aware of things and also check for hazards and dangers!

So if this post does one thing and one thing only, I implore,  if you have smoke detectors, check them. Check them now and make sure they work because if ours weren't working I dread to think of how much worse it could have been.
Posted by Helen - Blogging Beautifully at 5:30 am