You can't make this stuff up can you. After sooo looking forward to having a week off and chilling and relaxing what happens....... illness strikes of course. Talk about bad luck. The first couple of days were fine, not a problem (apart from my Dad having a chest infection but on a course of antibiotics so can't really hold him responsible!) then came the sniffles, sneezes and coughing. It seemed to miss Adi and  my Mum and target the kids and myself but I escaped pretty lightly compared to Alfie. He developed such a chesty cough and was streaming with cold for the majority of the break. This was exacerbated by tiredness. Due to layout of the house we were staying in the kids were in the attic room on the top floor. Alfie was sharing a room with Elarna, I was hoping it wasn't going to be an issue as in France we had a similar scenario with them in the same room but they both slept well. Currently Elarna is sleeping like crap and waking up alot in the night so it was fairly predictable that this scenario was doomed from the start. I don't think we had 1 night unbroken sleep. 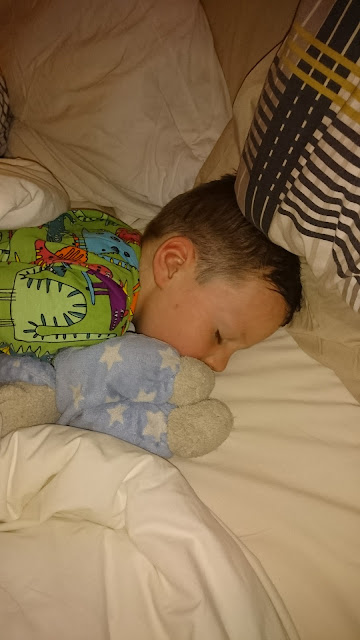 Mostly we were woken at between the hours of 4am and 6am (if we were lucky) by Alfie creeping down and appearing next to us complaining that Elarna was being noisy/keeping him awake/snuffling/crying/wailing or he'd woken himself up with a coughing fit. Towards the latter of the week it was hard to be annoyed as he genuinely was looking and sounding so poorly - although during the day, apart from the odd cough he was ok! The first couple of times he came into our room we let him get in the middle and we'd all try and get a couple hours more sleep - not so easy when you have a four year old star fishing in the middle of the bed. The next couple of times Adi ended up going up to the attic room and left Alfie in bed with me. This was all well and good as we had more space but Thursday night......or it may have been Friday I lost track he was coughing every minute or so *in my ear* and insisted on cuddling me, talking about trains and then telling me he loved me - he then drifted off and I was left trying to fall asleep with him sounding like Darth Vader - fun. We went through almost a whole bottle of calpol between the 2 of them, attempted cough syrup (no idea why when I know that it doesn't help a cough) and I ended up as 'that Mum' with a variety of clothes covered in snot on a daily basis.

Trying not to be grumpy and stressy and aiming to enjoy ourselves was somewhat of a challenge when the tiredness peaked but we did have a great time and I'll be writing about that soon. For the moment, here are some tips, well more like notes to myself for future reference on how to survive illness while on holiday........ 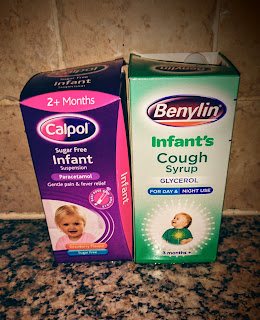 Fortunately it seems we are all turning a corner and everyone feels much better and we had a good sleep on Saturday once we were home and all in our own beds. It was a lovely break way, illness and all but I'm glad to be home.

What are your tips for looking after yourself while ill?