Ooops, I did it again I completley forgot to blog Elarna's 10 month update so will have to roll into the one post again. Life just seems to run away with us. You can read her last update here, this was back in January, I can hardly believe it. She is changing daily, learning new things, getting up to no good and becoming a bit of a diva! She watches Alfie intently, she seems fascinated by him and his behaviours.....god help us! 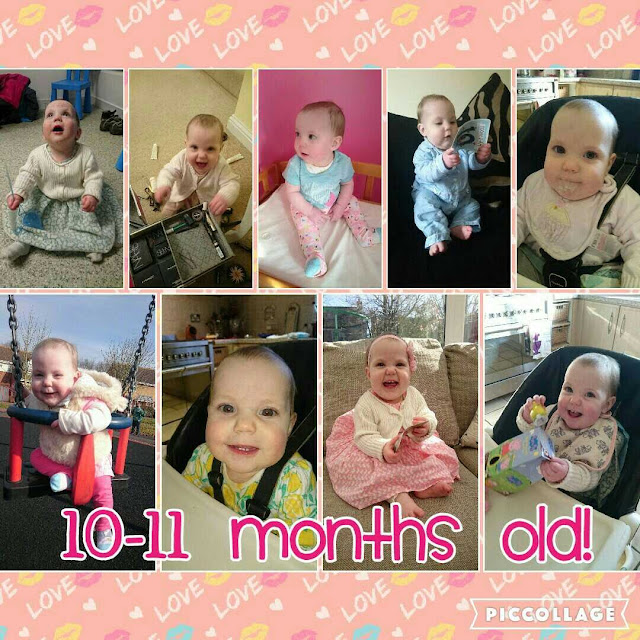 We've had a busy couple of months since I last blogged. In January she had just started nursery, I was really quite apprehensive about it as I felt that she was still quite needy and reliant on me but I am completely reassured that she LOVES it. They have the most lovely sensory room that she enjoys and when my husband collects her he says that she is full of smiles and shattered. She's eating really well while there but they sometimes struggle to get her to nap, she's doesn't like to miss a thing so that doesn't surprise me one bit. This is very similar to Alfie when he started nursery, although he continued to not really nap at home, thankfully we are still on 2 naps a day with Elarna which is good. 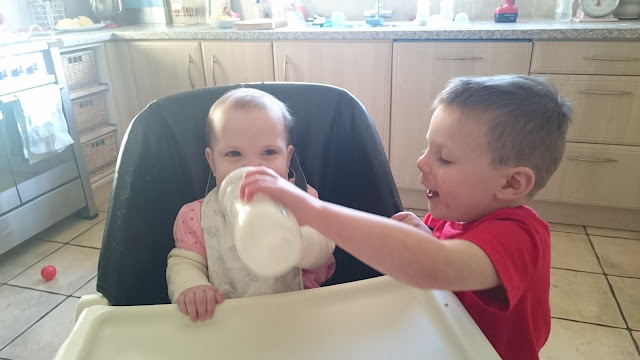 I always like to talk about the sibling relationship, Alfie really enjoys being a big brother, he struggles massively with jealousy though and that at times is hard to deal with. Usually he's very caring but sometimes he does get very frustrated and it's clear now that she's more on the move he doesn't know just how to deal with it. That being said he is most of the time very sweet with her. 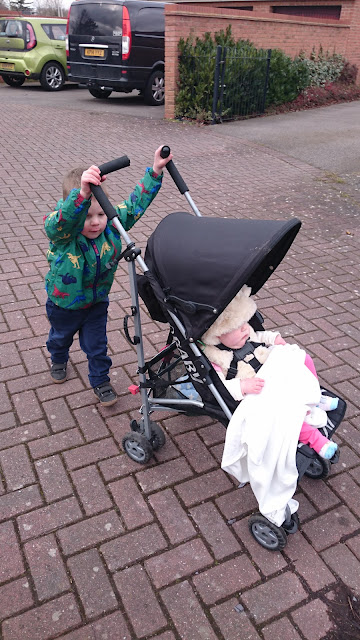 She just puts a smile on my face. Often when I leave for work at 7am she is still dozing but on the odd ocassion when I pop my head in she's sitting up in her cot and greets me with the biggest grin, it really does give me a lift. We now have a total of 8 teeth, they have been coming through thick and fast the poor little girly, she hasn't suffered horrifically, a bit grumpy and unsettled but bearable. 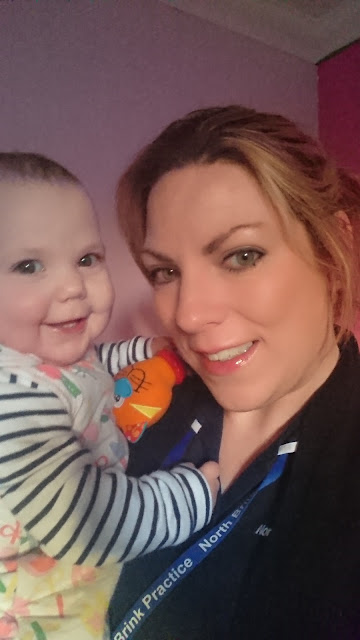 Although Elarna has found her feet and her ability to get from one place to another quite quickly by crawling we are yet to attempt to walk. She is very skilful at cruising and using various push along toys to get around but she just doesn't seem bothered by wanting to walk. I was convinced that we would have a walker way before a year but it isn't looking that way! Alfie walked just after his first birthday so I'm interested to see what Elarna will do. At the moment I have to have eyes in the back of my head as we have not fitted the stair gates as yet and she's up the stairs so quickly! She's also discovered the cupboards and drawers in the kitchen too, she's very intrigued by her new found skills! 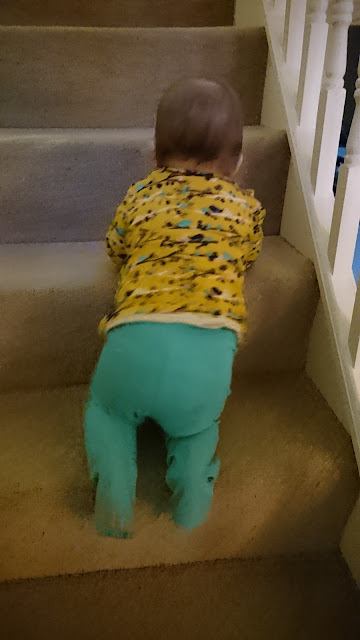 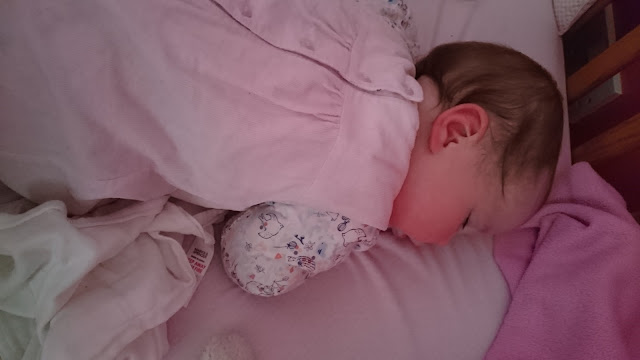 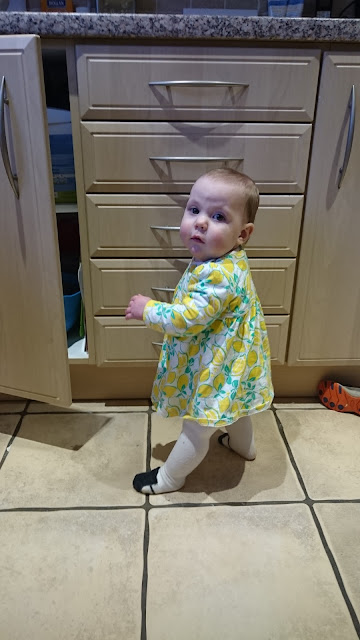 She's such a wonderfully happy and spirited girl. She's strong willed, stubborn and knows what she wants.......I can only imagine what we have to come over the next few years! She's such a lovely little baby and so very different to Alfie. He was amazing but their whole personality and behaviour is massively different! As much as I'm sad that we are approaching her first birthday (which I can't quite believe!) I am excited about the future and to watch her to develop into a lovely little girl. 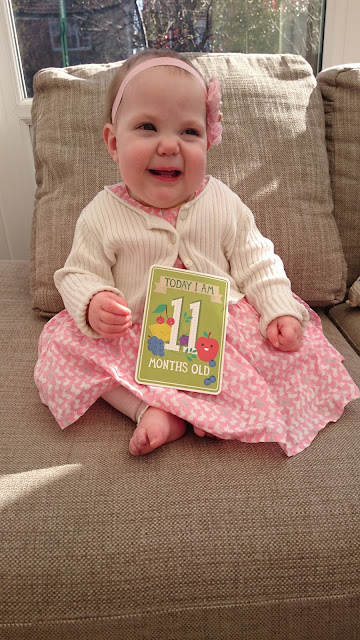 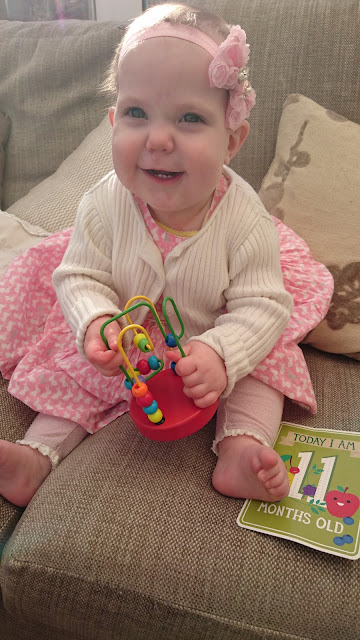 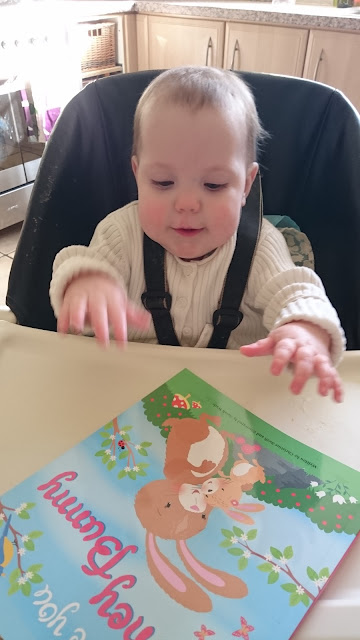 Posted by Helen - Blogging Beautifully at 7:42 am