I have always thought that we've been quite lucky when sending Alfie to nursery. He's never been the sort to cry, shout or scream when we drop him off, yes he is occasionally clingy and wants to be cuddled but he's never really been too bad.

He goes to nursery twice a week and my husband and I take it in turns to drop him off on a morning depending when my husband is working in London. Yesterday morning he seemed ok when I woke him up but the first thing he said to me was 'Mummy I don't wanna go nursery'. He's developed this really (and I mean really) whingy voice in the last few weeks and this morning was his full on whingy, whingy voice. Erghhhh. I immediately thought he's going to be a nightmare to get ready. Actually, on the contrary he was ok, with some chatting I helped him get dressed and we talked about the day ahead but he kept repeating 'I don't wanna go nursery Mummy', 'I not like the big boy room'.

I have to admit this took me by surprise, I've never, ever heard him say that he actually doesn't like to be in the new room at nursery. With a little bit of gentle persuasion I managed to get him downstairs from his room and let him watch a few minutes of Milkshake and gave him a little bag of Shreddies to munch on while I was putting his shoes on. While we were getting ready to leave he was whimpering and asking for cuddles. At this point I knew I was going to have to be a bit tough on him and had a feeling that the nursery drop off was not going to be great. 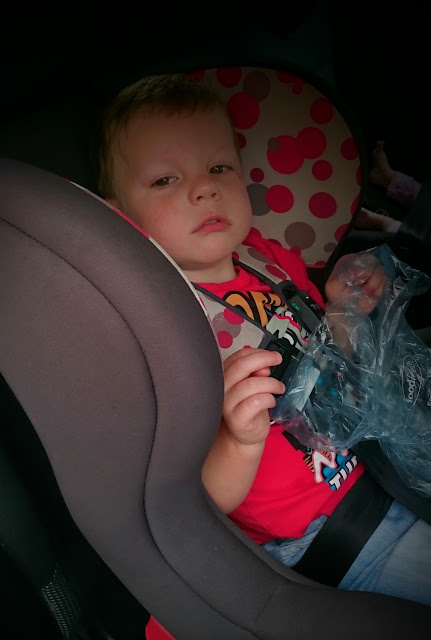 When I managed to get him strapped into his seat (with his bag of shreddies!) this happened. I know, I know a little bit mean of me to video it but I wanted to show my husband how he was yesterday morning. Just before I started to video (sorry for the awful quality my phone is slowly giving up on me I think) he was telling me that he didn't want to go nursery. My poor little man, I'm not really sure what's come over him, he has never, ever been like this when I've taken him. I can't emphasise just how unusual this is for him, something has clearly unsettled him.

During the short journey to nursery he was still sobbing and asking for cuddles, he kept saying 'I not like grasshopper room, I'm a caterpillar'. It was at this point I had to tell him to stop crying and be a big boy, harsh maybe but it was starting to be a little bit silly. The thing is I know that he will be absolutely fine once at nursery and busy away from home. Even though I was trying to be tough the sound of his sobbing was actually breaking my heart.


I pulled up at nursery and got Elarna out of the car and then Alfie but he was quite reluctant, he had calmed down a little but was still not his usually chirpy self. After struggling with baby and toddler we waited outside the nursery door and he kept asking for cuddles so I scooped him up (with some difficulty as I was carrying Elarna!) and gave him a big snuggle while we waited for the door to open.

We went into nursery and Alfie was clinging on to me like some sort of limpet, thankfully one of the girls called for some help who then relieved me of said limpet. He then started to sob even more and reach out for me calling 'mummy, mummy!'. Bloody hell what a nightmare this was proving to be, I quickly hung his bag and coat up and thought the best way to combat this was not to drag it out. I gave him a kiss and told him that I'd see him later and then I left.


I sat in the car for a couple of minutes. I felt a bubble of emotion and tears pricking at my eyes. I'm not usually an overly emotional person but this morning really affected me, I've never seen him like this when I drop him off. I don't really know what's changed, I think perhaps it's because we have returned from holiday and he's been with us solidly for over 2 weeks and also he has maybe come wise to the fact that I go home with Elarna when he's in nursery.

I knew that before we had Elarna that I wanted Alfie to stay in nursery for the 2 days as he does enjoy it when he's there, it's a great stepping stone for transitioning into school and actually he's got a very sweet little group of friends that he talks about. His development has also come on leaps and bounds over the last year too. The staff are exceptional there and I always feel reassured when I pick him up and I trust him in their care. I'm hoping that this is just a phase and he'll settle back into it in the next few weeks, it does make me a little concerned about how he will be when he starts school in 2016 BUT we will cross that bridge when we come to it.


Anyone got any advice? Did I do the right thing, is a short and sweet goodbye the best way to deal with this? This is all new to me!