I don't know what's worse, parenting a fiery 5 year old, a diva of a 2 year old or my husband......pick up your own grungy undies dear, it leads for an incredibly bad example. Each poses a challenge unto itself that's for sure. It's exhausting.

Yesterday was one of those nights. Trying to tackle tea time and bed time myself with a shrieking, tantrumming toddler and a cranky, over tired, starving (well he isn't starved but he's a growing lad that eats alot at the moment) was not a whole lot of fun if I'm honest. I couldn't get food on the table quick enough, a mutiny was just avoided.......... just.

The minute we sat down to eat tea the yelling and yobbish behaviour started.......you would think my son was some sort of animal the noises he comes out with which then starts his sister off. I go to the toilet and I'm gone a couple of minutes to come back and find him scaling the kitchen sides like Spiderman......why I hear you ask......no idea, apparently it was a fun thing to do. I then turn into 'shouty' Mum who doesn't come out very often but being the hormonal time of month (makes things sooo much worse) shouty Mum does sometimes appear. We then have a stint on the step for some time out when Elarna then starts screaming and decides she didn't want her tea and only wanted an ice lolly. Cue us both having a stand off over her plate and the contents nearly ending up on the floor as we pushed it back and forward between us like a game of air hockey.  The conversation went a little like this but times it byt 10 'no food, no ice lolly' - broken record springs to mind.

I then get Alfie off the step and he then proceeds to tell me 'you are NOT my best friend anymore Mummy, I'm really mad at you', that's fine son I'm not your best friend anyway I am your Mother and that is a fact. The thing is I hate having battles with my kids, I truly hate it and I find it hard to discipline effectively, shouting results in a war of words and speaking on their level is just laughable. Elarna takes herself to the naughty step so that isn't overly effective and Alfie just wails and strops while sitting on the step. Parenting is tough. It really is, every day is a constant challenge in our house, never does a day go by when they will do as they're told. Elarna perhaps still a little young to expect understanding from her but Alfie, he's 5 now and I know he understands between right and wrong but he has become very good at pressing our buttons, testing us to see where his boundary lies and just how far he can push us. I can honestly say it takes a good 3 times of asking him to do something before he might think about it, consider it and maybe do it. At times, it is like having a conversation with a pineapple. 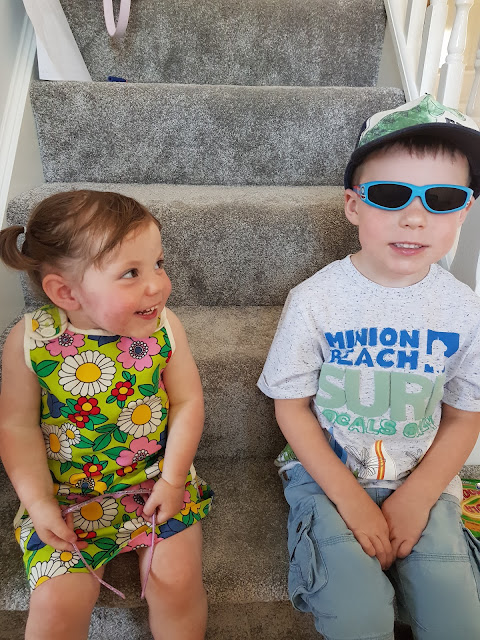 So as I started my post I come back to my original question. Who is harder to parent? I find both my children polar opposites really, as much as they look alike they couldn't be further apart. Alfie has the attention span of a gnat, can't sit still and is very much a boy that will do things on his terms.......at times I do feel like he tries to rule the roost and has some serious problems using his 'listening ears', but he's kind, caring and quite the bookworm. Alfie actually never used to be this character, he was always quite reserved and shy but recently has come out of his shell hugely, so I find trying to contain his exuberance hard at times. Elarna is everything Alfie wasn't when he was her age. She's confident, cheeky, throws the mother of all tantrums, knows what she wants and is creative, loves to colour and look after her dollies. I guess that makes it even harder having to adopt a different discipline to each child and to try and remain fair but it can be really difficult to get the balance right, if I ever do.

I conclude that both my kids are hard to parent in one way or another. I never thought for one second it was going to be easy but god I wish they did come with a manual to at least point me in the right direction!

Anyone else constantly feel like they are having conversations with pineapples as opposed to their children?
Posted by Helen - Blogging Beautifully at 5:30 am