Oh Alfie. How are you 5?  How is it possible that you are no longer a small, wriggly little baby but a young lad, a proper little boy these days - with the attitude to match I may add!

I had similar emotions the night before Alfie turned 5 to when he started school. This weird feeling in the pit of my stomach, a mixture of feeling proud and yet emotional. 5 just seems the 1st of many milestones doesn't it? 5 whole years! Unbelievable. He's been on this planet for 1,825 days and I have successfully managed to keep him alive. Quite the achievement. 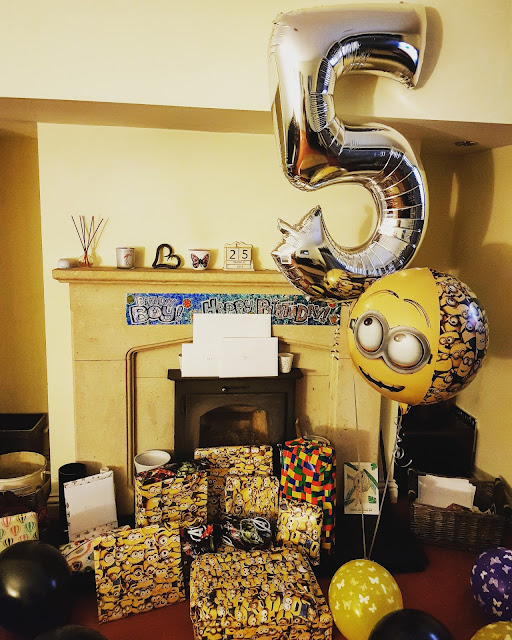 The build up to his birthday seemed to go on for weeks and weeks! He was so flipping excited, had a very concise birthday wish list and strong views about how he'd like to celebrate, ha! As a stroke of luck, one of my lovely Mum friends suggested throwing a joint birthday party as her son and Alfie's birthday are just a few days apart and they get on so it made sense to join forces and throw them a fab party. I have to admit it was lovely to be able to share the planning stress (and cost!) between us. We were able to have a couple of pub get togethers to arrange everything and it was nice to have a good natter at the same time. We decided  on a space/disco theme as both boys are keen on that and we knew it would be a good theme to work with. 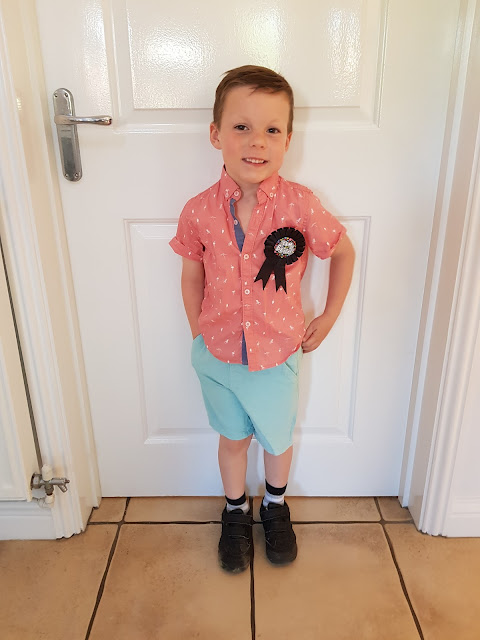 On Alfie's actual birthday, the 26th May it was a very busy day indeed. Not only was he turning 5 but it was his last day of term, May day and a teddy bears picnic for the new EYFS class starting in September. A packed day! Now I tried to be organised Mum and booked 1/2 a day off work so I could come and be part of all these celebrations, however I booked the afternoon off rather than the morning so clearly my organisation wasn't that great! Think I need to work on it......... I was absolutely gutted if I'm honest, I hate missing out on things and I often do as things tend to be arranged on a Friday so I was kicking myself for not checking when it was all taking place. Anyway, I had to suck it up and my husband went along to watch it all and took plenty of photos and videos so I could see how he got on in his 1st May Day. He did brilliantly and wore his birthday badge with pride, he also got a headteacher award for good writing again so I was over the moon for him. A very memorable birthday for sure.

Think you'll agree he looks very smart in his May day attire, looking all grown up! I think that's the thing that strikes me about him recently, he just seems to be looking much more mature and has shot up in height, he also seems to be eating for England! 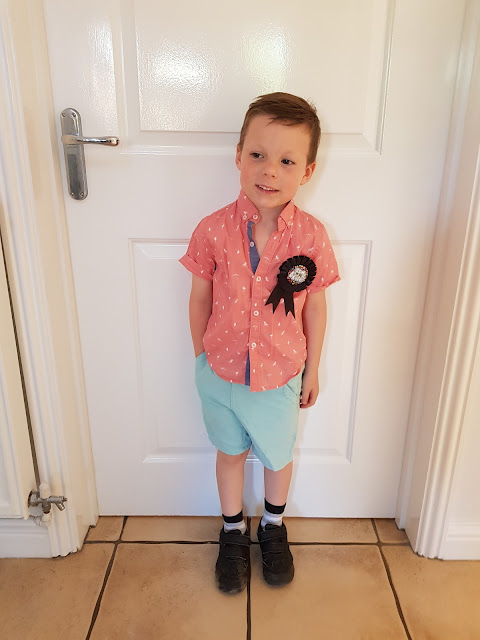 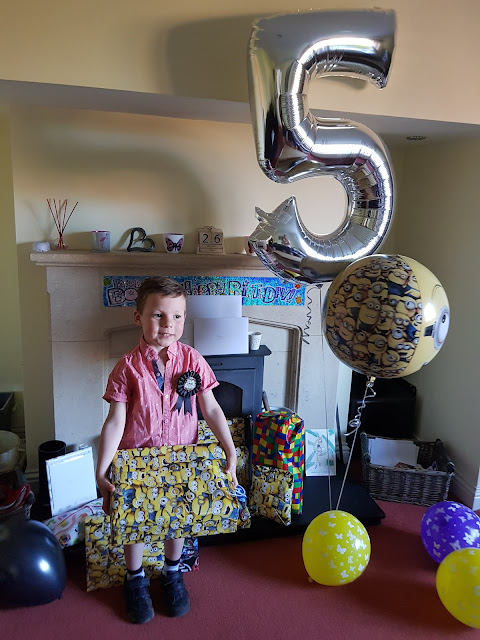 I have to admit to being a bit of a mean Mummy and I didn't let him open all his pressies before school, he was allowed a couple of small ones but I didn't want him rushing it. Besides mornings are always slightly frantic making sure we all get out the door on time. Plus, it was something for him to look forward to after school. He was very pleased with his pressies, we got him more Marklin trains to go with his set (well worth a look if you have a train mad child), lots of minion related items, books, a couple of games, a watch and various other bits and pieces. We had already bought him Crossbones (his corn snake) so didn't want to go to over the top. 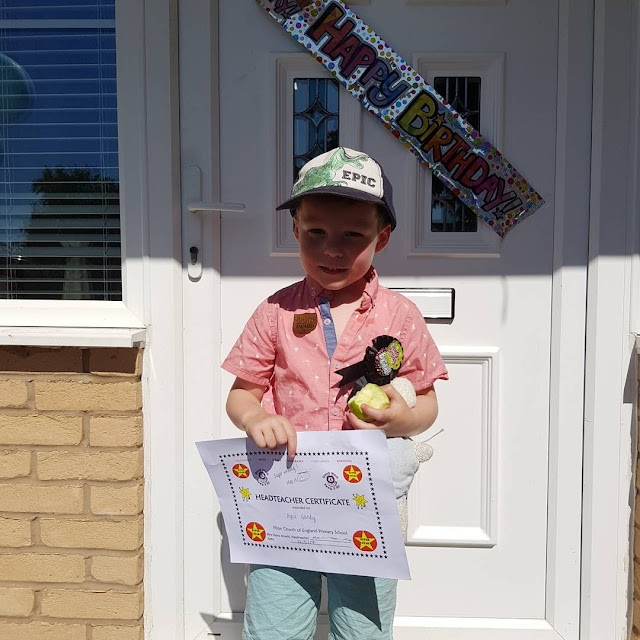 We then had a special pizza tea (delivered at Alfie's request!) and a (another) cake before convincing him to go to bed so he could go to the zoo on Saturday. It does seem to be a bit of a birthday tradition in our house now, every year we've taken Alfie to the zoo as his birthday treat and this year we went back to Whipsnade. We'd been a few months before and it is lovely so we were more than happy to go back, plus it isn't too far for us to travel. 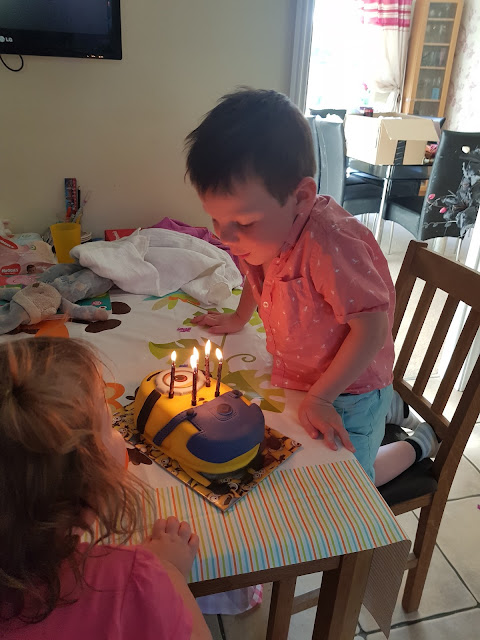 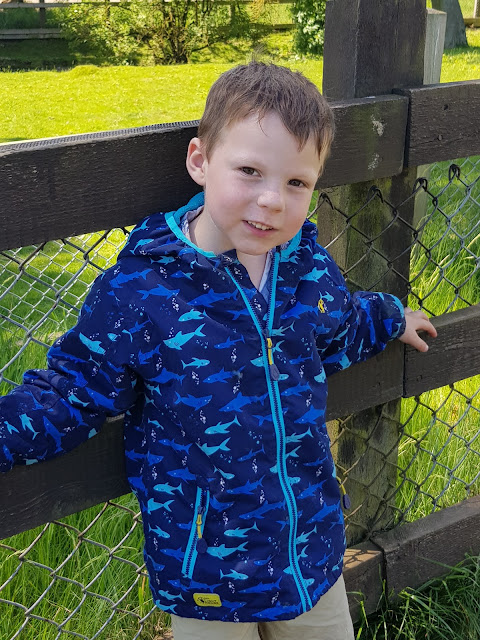 Whipsnade really is a lovely zoo. Really spacious and lots to see, a ton of walking to do though. We've said when we go next time that we'll take the car in and pay the extra to drive round each part as that way you get to see it all. I'm fairly sure that we missed a chunk again this time which is a shame. It was a really nice day weather wise but it was pretty blustery, considering the day before had been the hottest of the year so far it was nice to be able to walk around without getting too hot. We took a picnic and it was really nice to sit and look over the Dunstable Downs. If you haven't been before go and visit! 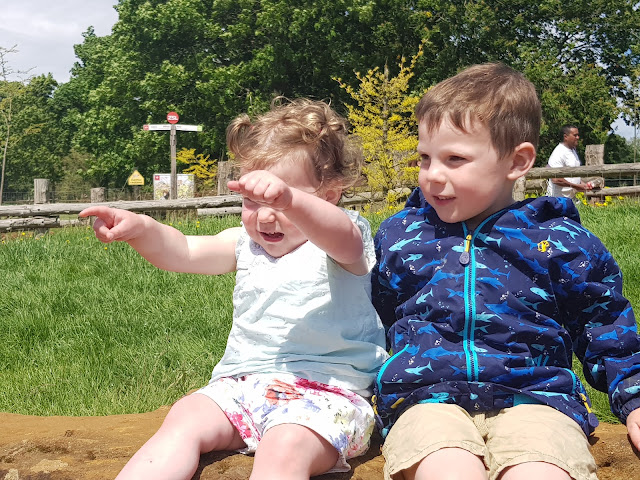 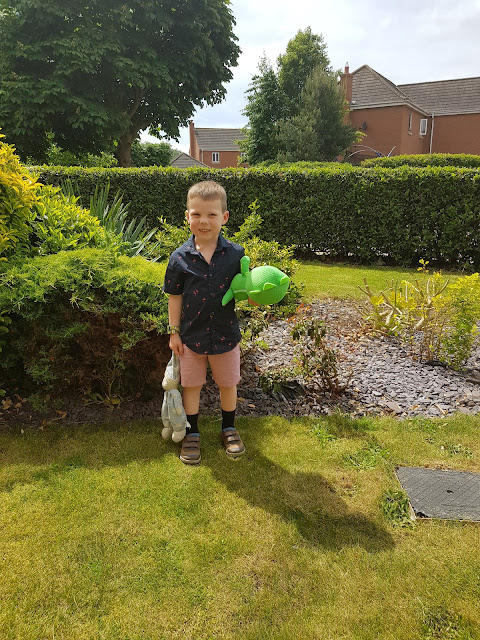 Sunday was party day!! It came round so quickly from the point of us chatting about it to planning to it actually being here. Alfie was so excited to see his friends and have lots of fun. We used a local company to hire a party package consisting of a disco dome bouncy castle, balloon display and candy floss tubs, between us it was pretty good value. We halved the cost of everything else and between us did the usual generic party food. We also provided a few boozy drinks for the adults, one of things that I've noticed when going to kids parties is that the adults don't seem to be catered for and yet the last few years we've always provided the option of beer or wine, as there is nothing more dull than standing around watching your kids have fun so why not let the adults have a bit of light refreshment. I have to say it went down well and several parents said how nice it was to have the option of an adult drink. We also provided non alcoholic beers for those parents who wanted to feel like they were having a cheeky drink but weren't! 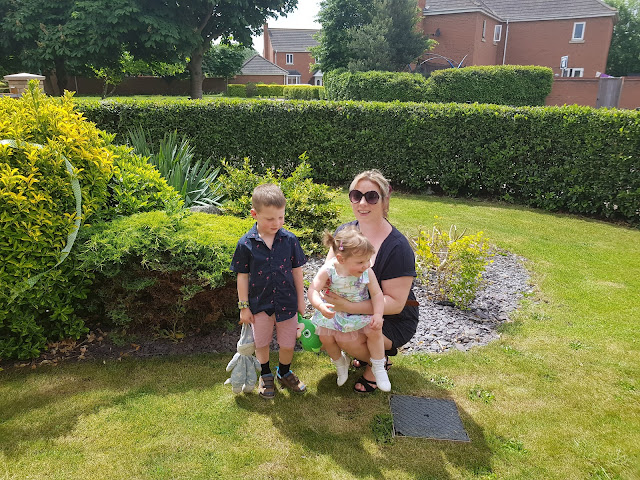 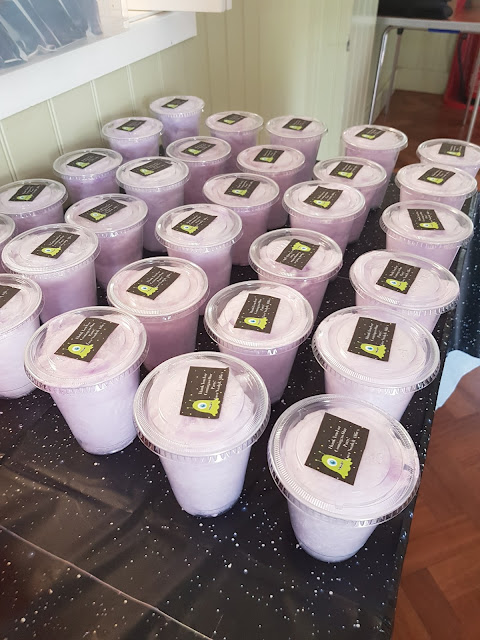 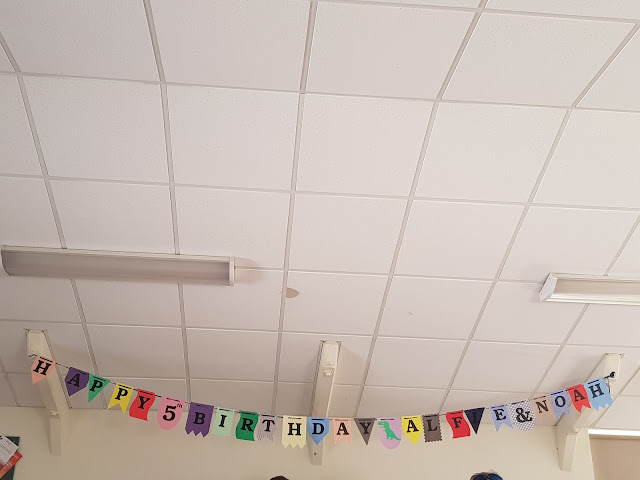 Disappointingly, only 9 children out of Alfie's class of 20 came. We knew some weren't able to attend who had let us know, but we were expecting a few more that had replied and said they were coming to be there. I toyed with whether to write this paragraph but thought I would as I find this a little rude as we'd prepared tons of food and made a load of party bags. To not even be informed a child wouldn't be coming when they have said they would is a real shame in my opinion. I guess it happens though, people may have forgotten or children may have been ill, one of those things I suppose. That been said, both Alfie and Noah had a brilliant time and most of Alfie's best friends were there which is the main thing. They both had an absolute blast. I'm hoping we can do a joint one again year...... fingers crossed! 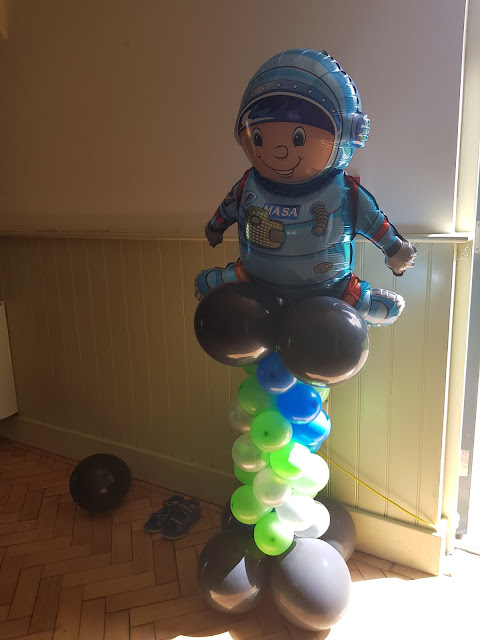 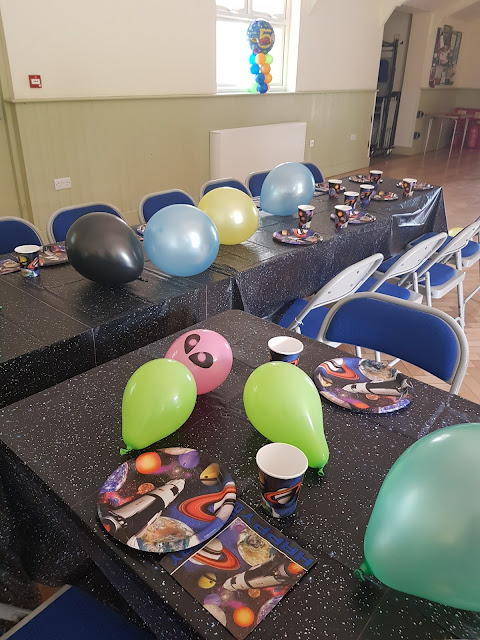 I just want to make a special mention to my other Mum friend who made Alfie and Noah's birthday cakes, she also made Elarna's back in April which you can see by clicking here. I think you'll agree that they are ace! Hannah is so crafty and creative, she runs her own little cake business and if you're local to the Peterborough/Cambridgeshire area check out her Facebook page, she is ace. I also want to add that the 'f' on Alfie's cake was initially intact but Alfie decided to poke his finger in it just as we were setting up....little monkey. 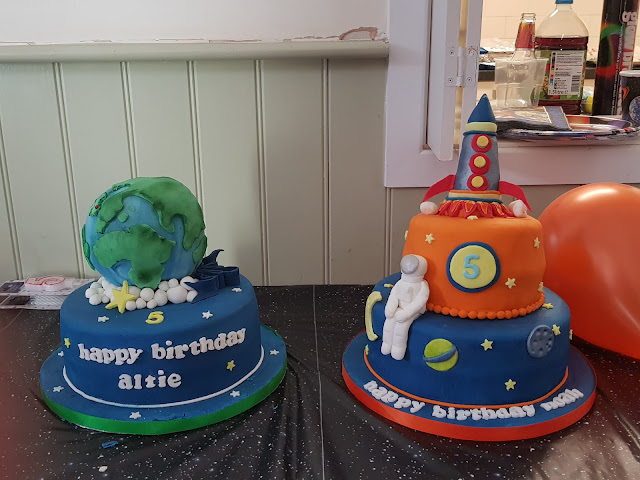 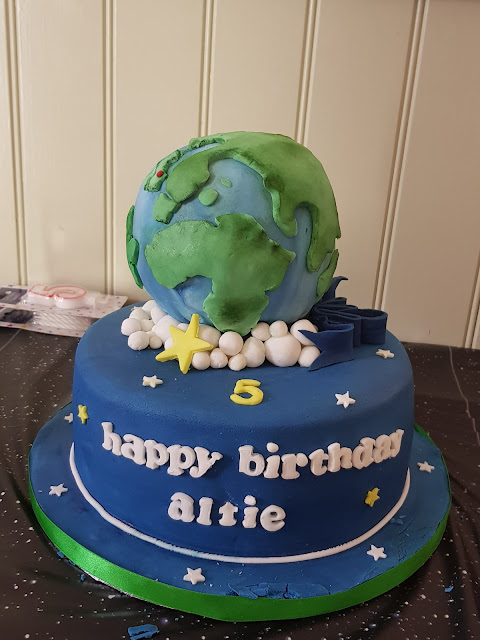 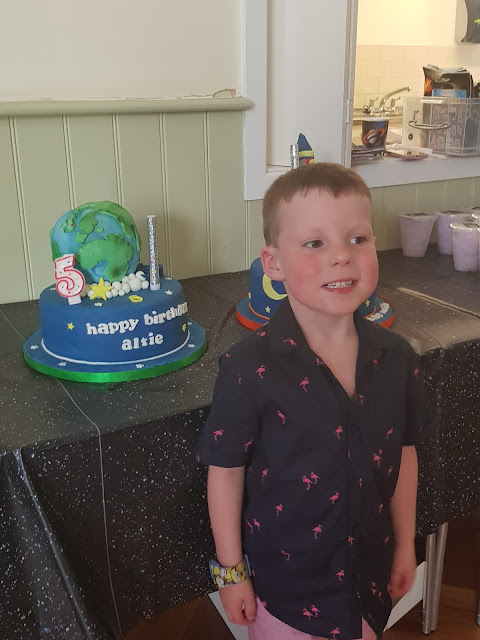 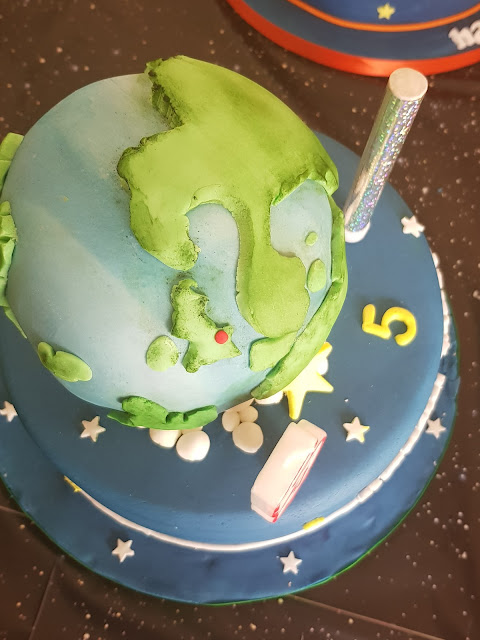 I think it's fair to say that Alfie had a brilliant birthday. There was lots of memories made and it was a very tiring few days! Here's to the next year.......  I know it's going to fly by. 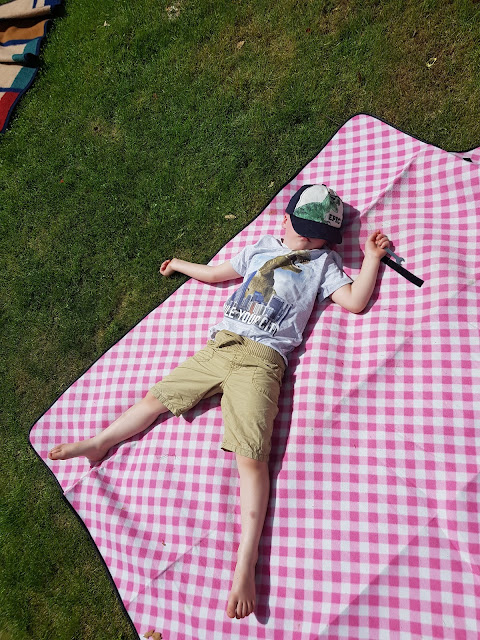