Wow it has been a mega week, super busy and lots of fun. I didn't write a weekly update last week as was doing a catch up on some reviews and knew I had a busy week ahead. We had a quiet Friday night in as we were to be up fairly early to get ready for our day of fun in London. We have been promising Alfie for months now that we would take him to London on a Virgin train (his fav) and show him where Daddy works (canary wharf) and take him on the underground again so with Winter Wonderland on we thought we'd tie it in with a visit to that. After having a pretty rubbish trip a couple of years ago to Winter Wonderland we were really hoping for a better time. There was nothing wrong with Winter Wonderland when we visited previously we just chose a terrible day weather wise, it was pouring plus freezing and we ended up all being pretty miserable! We tried to make the best of the day but it was hard when we were all drenched and shivering. We'd decided not to take Elarna to London with us, we didn't take her to the Christmas market the week before and we weren't being mean but at 18 months she doesn't want to be stuck in a buggy all day and it was so busy that we were grateful to only have the one child to monitor. We'll be taking her next year when she's more aware of things, besides she had a great day with the Grandparents so I didn't feel too bad.

Anyway so we caught our train (yes the Virgin train much to Alfie's delight) and arrived quickly into London, even more exciting for Alfie was being able to sit in the train drivers seat in the front of the train - as we were leaving the station we managed to have a quick chat with the driver and to let Alfie look in the front and the very lovely drivers invited him up and showed him around and even let him push a couple of buttons. I've never seen such a big smile appear on his face! We then took the DLR to Canary Wharf for a whistle stop tour before heading back to St. Pancras to meet our bestests for a champagne pit stop. Always a good way to start the day off! 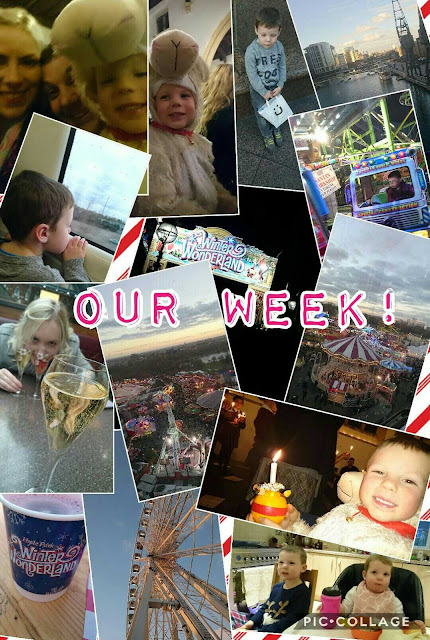 We headed over to Hyde Park and we kind of got a feeling it was going to be busy but I didn't think it was going to be quite as busy as it was, it was absolutely heaving! That been said though we didn't have to queue for a massive amount of time for rides and food. The rides work by purchasing tokens rather than paying in cash which does make things a little easier but it can be slightly annoying as you then end up with a surplus of tokens to try use up. Alfie went on a ton of rides and he had a blast, his personal favourites were the dodgems, the santa workshop and the ferris wheel......which was far too high for my liking and I personally didn't enjoy it that much although the views across Hyde park were pretty cool! We got home just before 8pm and were shattered. We had a much better time this year and although it is pricey it was alot of fun. My tips - be prepared to pay a ton of money out for everything, expect it to be busy, just go with the flow and enjoy yourself. After the excitement on Saturday I had planned on a quiet day on Sunday but in the end spent a few hours Christmas shopping, I swear I'm still exhausted from the weekend!

The rest of the week has been fairly quiet other than Alfie's Christingle service on Wednesday evening. I remember having Christingle when I was younger but don't really have many recollections about it other than holding the orange! Alfie and the rest of the EYFS class were to create the nativity scene and Alfie was a sheep. I was initially a bit peeved that Alfie was playing a sheep but actually he was quite happy with this and he looked so flipping cute in his little outfit. The whole evening was really lovely, the church looked so pretty all lit with tealights and the children throughout the school put on a lovely performance with singing, poems and readings and then then nativity scene at the end. The EYFS class did brilliantly and I was super proud of how well Alfie performed.........and he didn't turn into a human fireball when he held his lit Christingle so that's also a big bonus!

Sorry to ramble, as you can see a busy old week. We are so busy from now until Christmas, I do like having busy weekends but sometimes it can be a bit much! We do have some great things coming up in the next couple of weeks and as it's my birthday on Monday this weekend also holds lots of fun ahead.

So this has been my week, what have you been up to?
Posted by Helen - Blogging Beautifully at 5:30 am