We drive to the Dordogne (South of France) every year, it's something we've done for years now and it's one of my favourite road trips to do! Of course it is though as it marks the start of our holidays, we're not really phased by it regardless of the length as we're quite used to it now. Before children we'd bomb it down in one go and in hind sight to do it all in one was nuts but it was nice to be at our destination without having to factor in over night stops. Now with the kids we split the journey, we tend to stay in Dover the night before our ferry, we then get a super early to catch our crossing and then drive and have 2 over night stops the last one being a few miles from our gite so we know we avoid any holds up with the French 'black weekend'.

We've never really had any car issues up until last year. Our car isn't hugely old, it's coming up to 8 years so I guess you expect things to start going wrong but not while away in a foreign country! Last year things when a little bit wrong, we'd recently had the car serviced and MOT'd (check out Kwik Fit for MOT's from £25) and all seemed fine with our journey until we go to the depths of the Dordogne. For anyone who has visited this area you will know that some of the roads are very twisty and turny and bumpy. We'd been to the supermarket and on the way to our gite (villa) I could hear a noise that sounded like clinking bottles, it continued when the car was emptied. In a nutshell when Adi looked underneath the car he'd noticed some of the springs had broken, I think from what I remember they were something to do with the suspension. To cut a long story short we ended up having to get the car repaired in a French garage and the French being typically laid back had it for almost the entirety of our holiday! Luckily we'd taken out Green Flag insurance so were entitled to a hire car but still we we were a little annoyed by the whole situation, we also ended up being a £1000 poorer with the repair - nightmare. 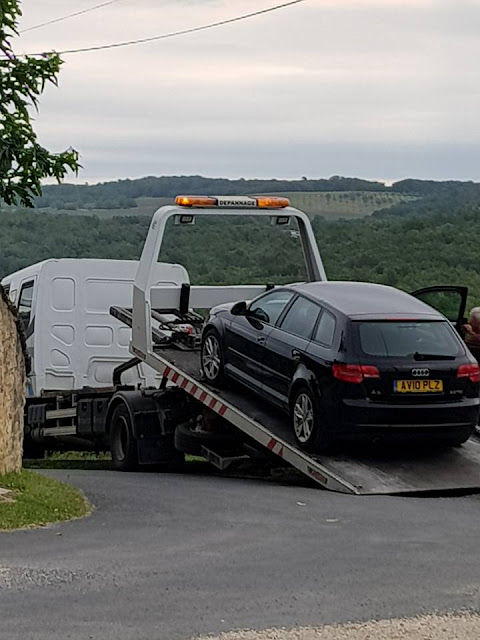 You can never plan for these things however and we wouldn't have known this was going to happen, we're just super lucky that we made it to our destination rather than this happening while we were on the motorway, for example. I think the important thing is to ensure you're car is up to date with its servicing and get adequate insurance for when driving abroad.

We're soon to be off on my favourite road trip, I can't wait.....I just hope the car is ok this year!