Jewel Candle - A not so glowing review

I love candles, Adi not so much but I do, especially in the winter months when it's dark and miserable, I think candles can be so comforting and cosy. When I came across a company called Jewel Candle I was intrigued.........a candle with the added surprise of a ring or earrings (worth from £10 - £250) buried deep within the wax and the only way to get to it is by burning the candle!! What a brilliant idea, perfect as a unique present for somebody.........or is it?? 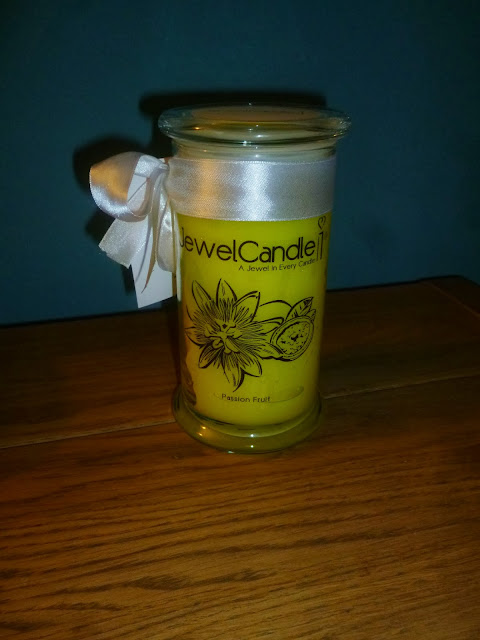 I was kindly sent a passion fruit scented candle, on the initial impression I thought the yellow colour of the candle was really quite garish, a nice muted lemon would have been a bit nicer. The jar the candle comes supplied in is lovely though, very sturdy and solid, the pictures imprinted on the glass are also pretty. The candle comes presented with a cream satin bow tied round and information about what you could find in the candle. 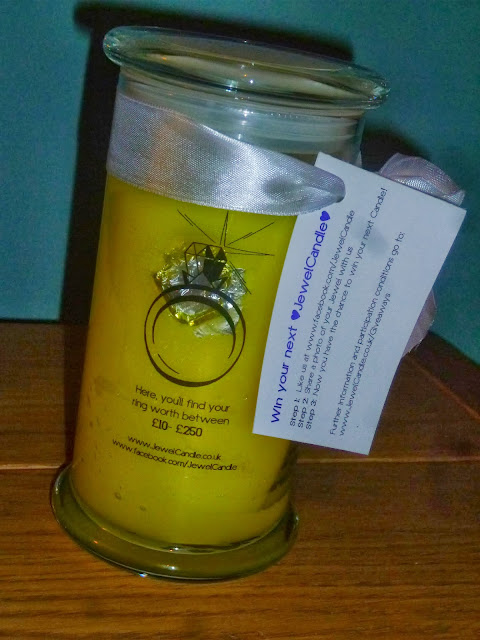 I was so excited that I could see the little package that I knew contained my ring and was pleased that it was quite near the top so it would require only a few hours burning to see what I'd receive! The jewellery itself comes wrapped in heat resistance foil and is in a little bag to protect it and prevent any damage while waiting to be discovered. 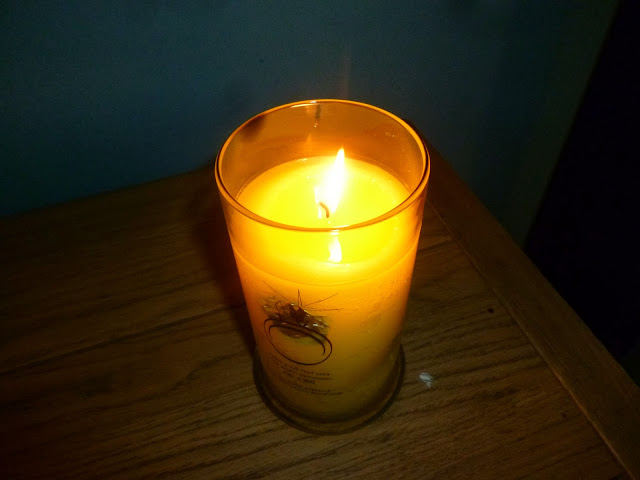 It didn't really take long for me to be able to get to the jewel as after about 3 hours I could just see the top and with a little bit of prodding around with a knife I was able to gently prise the packet out and see what I'd received, eeeeeee!! I was so excited, will I have received a £250 ring?!? 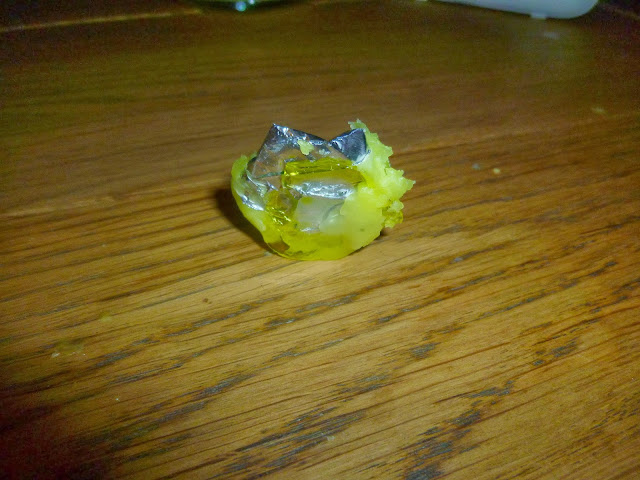 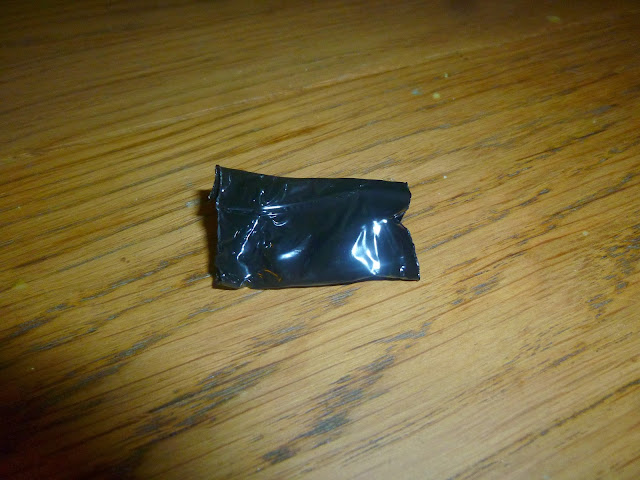 Once I'd pulled the packet out I ripped it open like a child opening Christmas presents..........once I'd gotten into the packet which took a couple of minutes I pulled out what can only be described as a ring that looked like it had been received out of a cheap Christmas cracker. 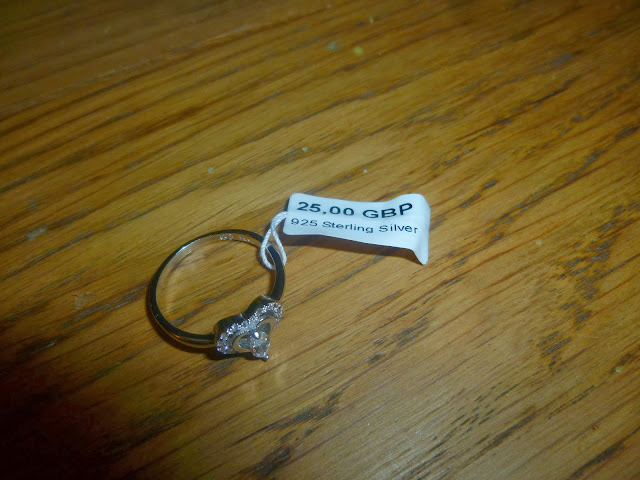 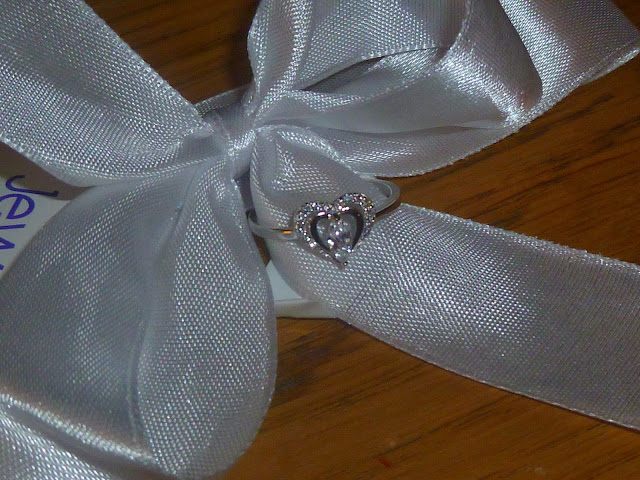 It really looks like something a child would receive and the value of this ring is supposed to be £25.00. honestly I wouldn't even pay a fiver for it to be honest, it felt so cheap and badly made, plus it was actually missing one of the small stones which you can just make out on the picture. So disappointed.

After the disappointment of both the candle and the ring included I felt I had to contact Jewel Candle with my grievances. On my first contact I was messaged back quite quickly by Tom who offered to replace the candle for me and was also very apologetic which I thought was a really nice thing to do so I could give the company a chance to redeem themselves.

I have read other reviews and know other people love them and have received some nice items so I wondered if I had just received part of a bad batch. After a couple of weeks I had heard and received nothing so contacted Jewel Candle back again to see if they were sending another candle out. I was contacted again after about week stating that I would be sent a replacement ring, 10 days on I have received no candle, no ring and my email asking about it remains unanswered.

Now I know what you're thinking.........I got sent the item free to review so why complain as I didn't have to pay, however when I review an item  I have to consider the item as if I was a paying customer and I always give an honest opinion of what I think otherwise what is the point.

So to sum it up I wasn't overly impressed with the scent and the colour of the candle, the jewellery received was poor quality and the communication between myself and the company has been a real let down.  The candles to purchase cost £24.95 which I personally think is very overpriced considering I could buy a White Company candle for £20.00 which are far superior. If you do want more information you can click on the link Jewel Candle to find out more.

Apologies for the negative review but as I've said what's the point in reviewing something if you don't give an honest and unbiased review. I'm glad I didn't purchase any of these as presents as quite frankly I would have been embarrassed if any of my family or friends received a ring like I had.

Thanks for reading and has anyone else got any thoughts on Jewel Candle?

*As already stated I was kindly sent the candle free of charge to review, any items I review will always be reviewed honestly and the thoughts and opinions are that if my own.
Posted by Helen - Blogging Beautifully at 5:33 pm