I have 2 children that absolutely love PJ Masks, it's often on repeat in our house and I confess I sometimes find myself humming the catchy theme tune! We were recently sent an amazing box crammed full of PJ Mask goodies to celebrate the new adventures of PJ Masks who are off on a Super Moon Adventure.

So without further ado lets get started with some of the amazing items that are going to be featuring in the PJ Masks range this Autumn!

We loved the HQ rocket with its fold up legs, ramp and built in handle, as well as exciting lights in sounds. It can also fit the 3 PJ Masks in the front and comes with Gekko and a space rover vehicle which can be stored inside and with the touch of a button can whizz down the ramp. Easy to transport with the handle, it's a winner! 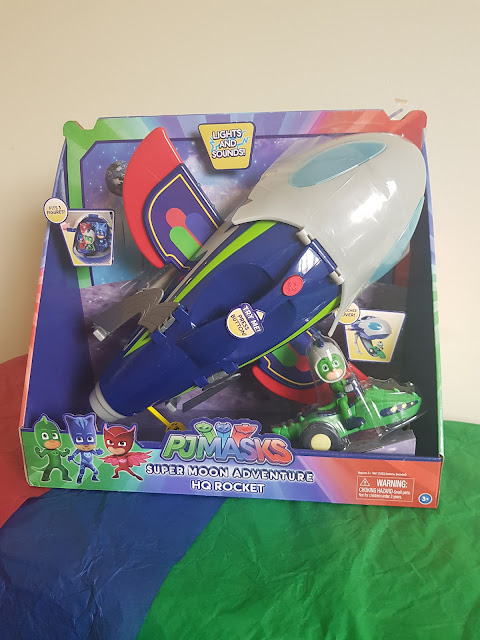 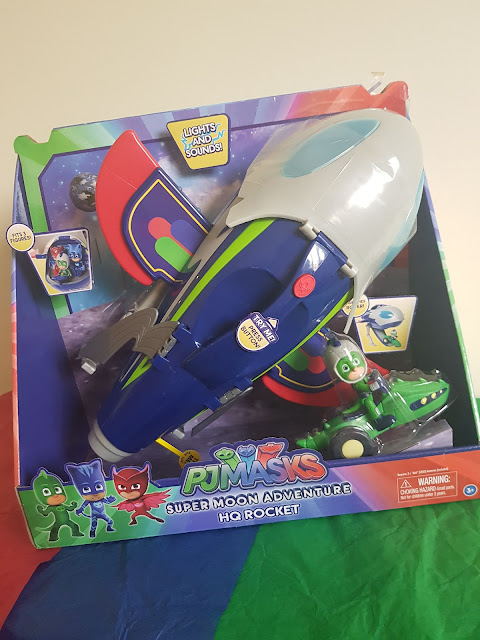 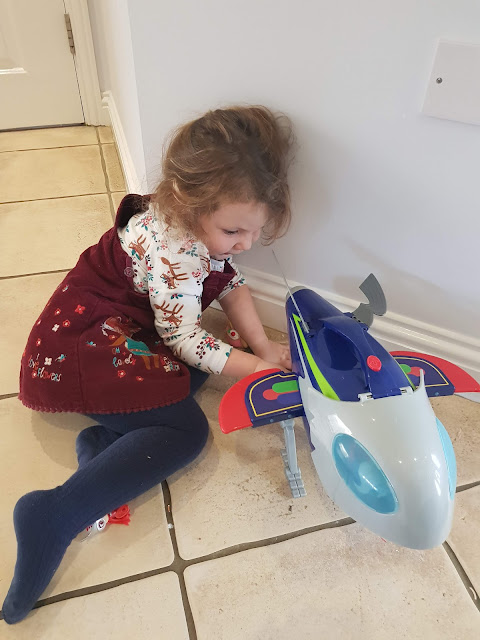 These great vehicles are themed to each character and included in the set is one booster vehicle and figure. No batteries are required as they push along and go super fast - the kids had a blast with them! 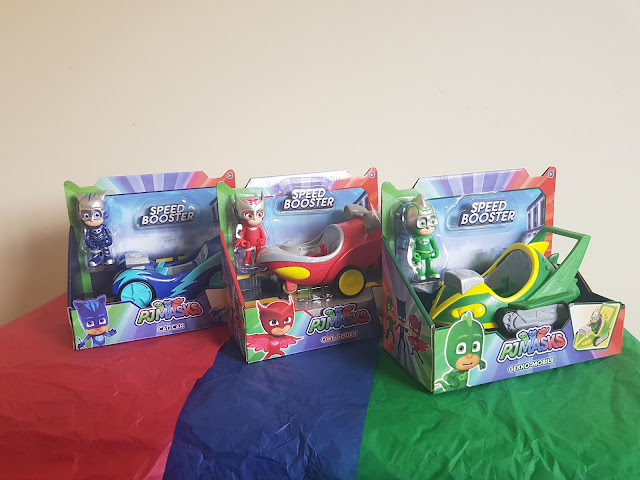 Both my kids absolutely loved playing with these as you can see later in the post. They couldn't get enough of racing against each other using the racing track we were sent. It was quite competitive! They keep them entertained for hours, such a good price and well worth the money for the amount they have played with them. 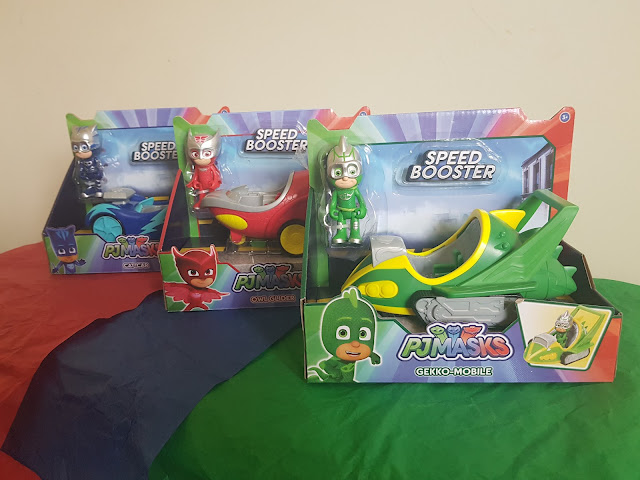 Next up is the Super Moon Adventure Space Rover and Figure assortment (RRP £9.99) * New for Autumn*

Each set comes with a figure, a space rover vehicle just like featured in the show and a space themed accessory. Each is sold separately and compliments the TV show perfectly.

Elarna loves Owlette and her  red rover and accessories where as Alfie tends to gravitate (pardon the pun!) towards Catboy and Gekko, although more so Gekko as green is his favourite colour! 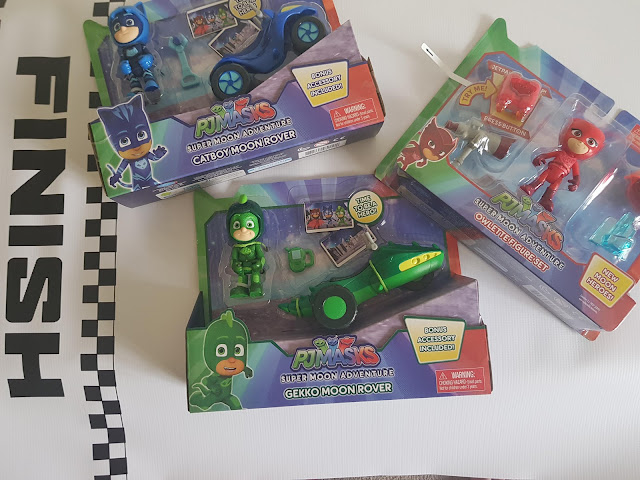 Before we get on to the next items that we were sent, here are some sneaky peeks at our PJ Masks Super Moon party that we hosted for the kids and family friends, we were sent a bunch of supplies within the box including invites, a selection of games to play during the Twitter party, posters and goodies bags including sweets, bubbles, bouncy balls and PJ Masks goodies. The kids (and us!) had a whale of a time and you'll see more of what went on during the Twitter party on Wednesday 17th between 1pm and 3pm. 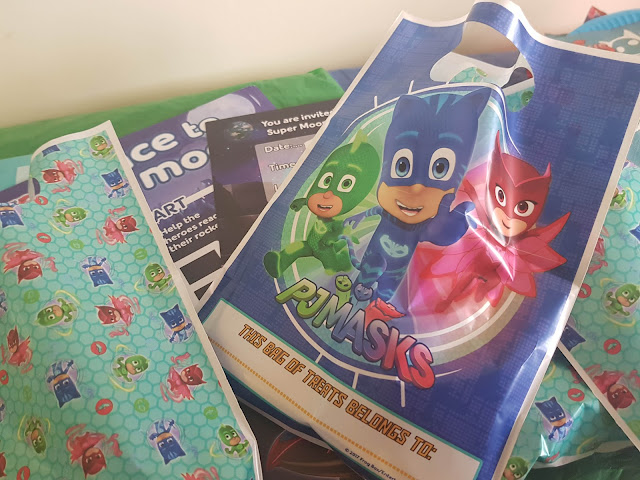 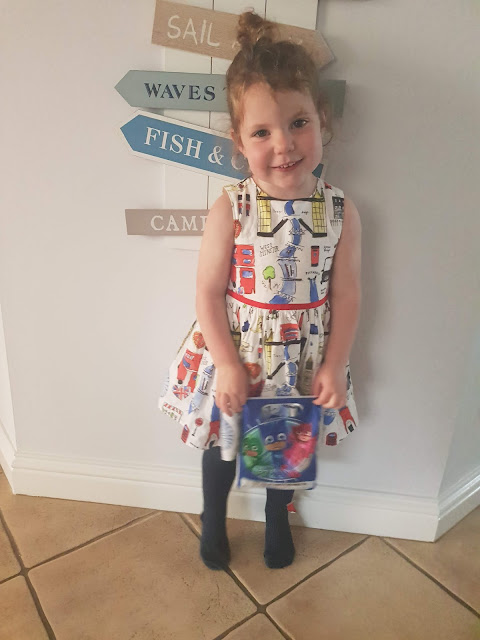 We set the table up ready for an intergalactic, space party complete with party rings and glow sticks for added fun! There was colouring, painting, racing of space vehicles and most importantly a chance to test out and play with the new PJ Masks toys. Luckily we had a few PJ Masks fans so these were well received. 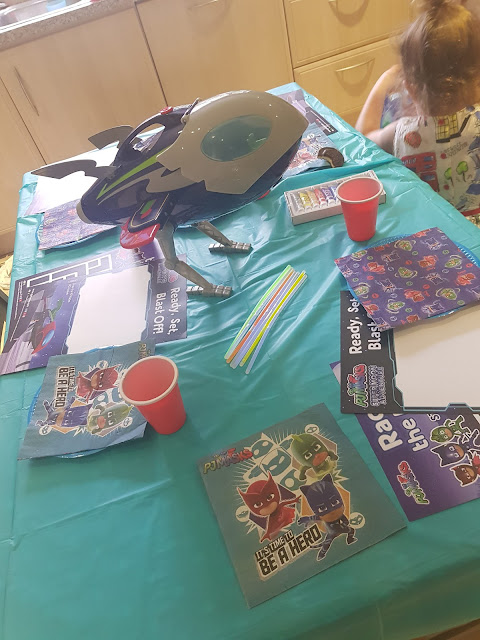 As mentioned above, alot of time was spent racing the space rovers and booster vehicles, I have to say I had a go and they push along really smoothly meaning if you race them on a hard floor likes ours they go super fast and a fair distance. I was impressed that the PJ Masks characters actually stayed on the vehicles while being pushed around. 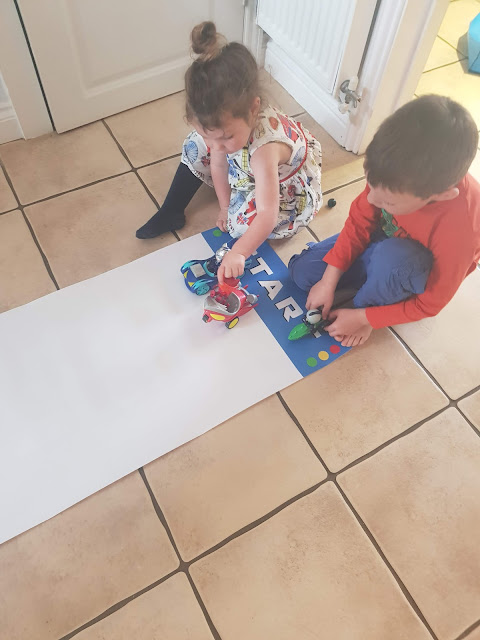 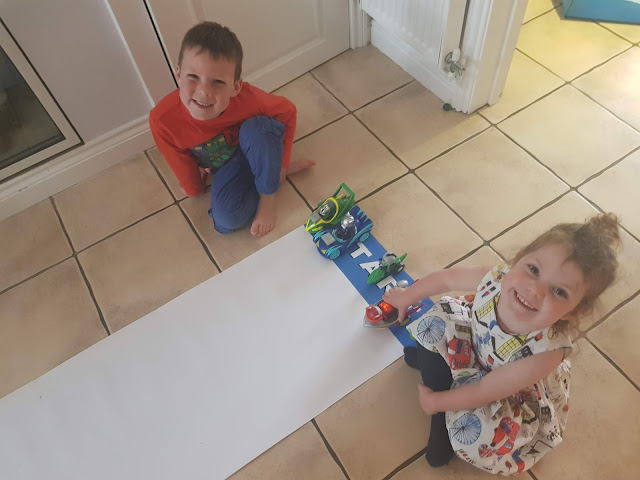 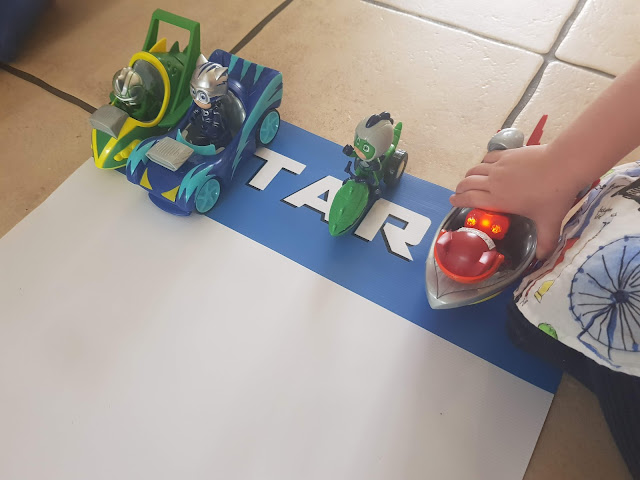 To further enhance the kids play with the other toys we were also sent the Deluxe PJ Masks Figure Set (RRP £34.99) * Existing Line*


I loved this figurine set, so much included and although was great to use in conjunction with the other toys, played with independently it's also just as fabulous. I particularly loved the stacking Ninjalinos! There are the 3 PJ Masks and a whole other host of characters from the TV series. Presented beautifully in a clear plastic box you can see what you're getting and it really is a great set. Each figure is 7.5cm tall and comes with poseable arms and legs to keep the imaginative play going. 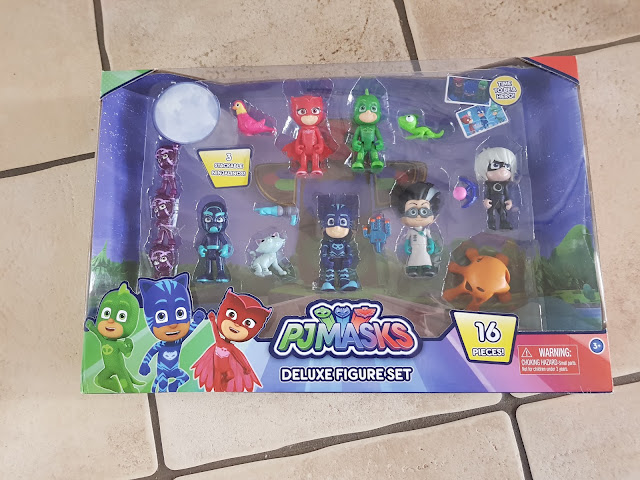 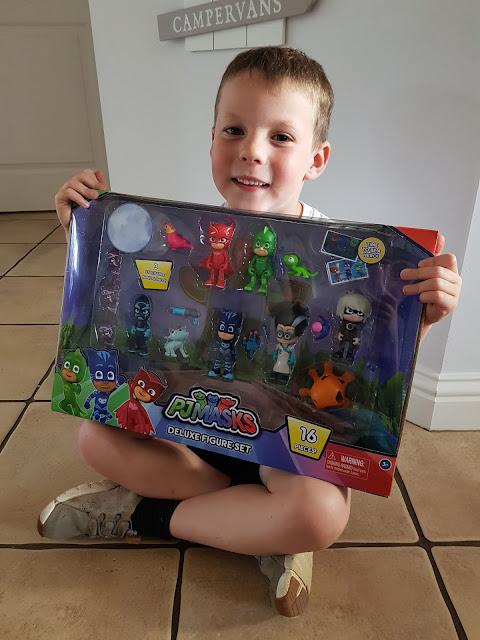 Finally, last but by no means least. The Mission Control HQ Playset (RRP £49.99) * New for Autumn*

The HQ playset is totally great I have to say, featuring 3 levels of play and action packed fun. The HQ features lights and sounds which include phrases from the show, a totally awesome spinning totem pole which you can simply attach a figurine to and press a button and watch then whirl around the pole at lightning speed to the bottom. 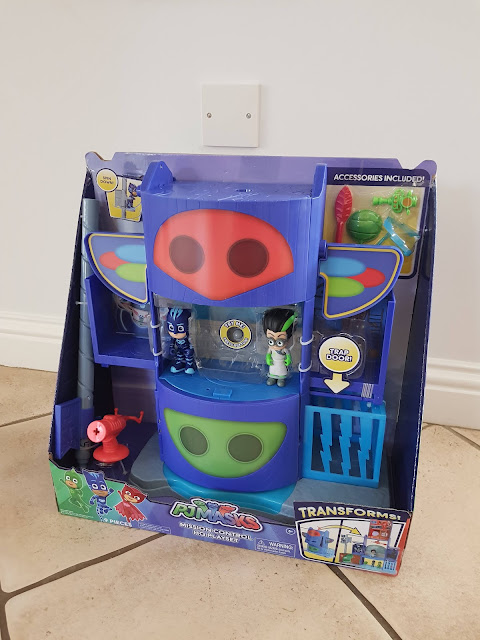 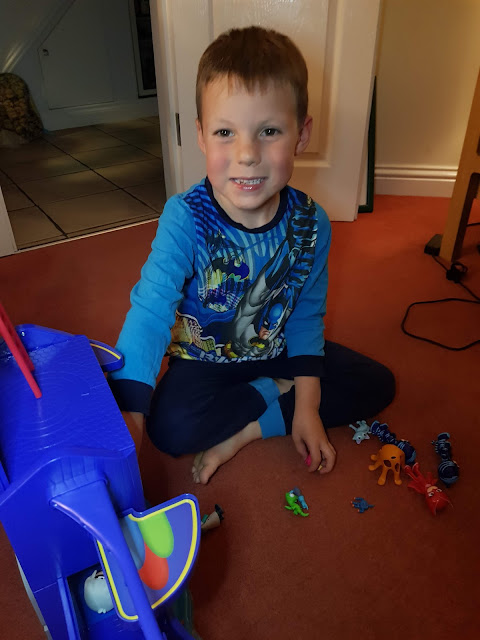 Also included is a moveable feather dart and blaster and changeable screen, a working trap door and cage to trap those pesky villains as well as a built in shield, the fun is never ending. Included with the set is Catboy and Romeo and can fit any of the other of the 7.5cm figures. It is brilliant and well worth the money, Alfie has played with it so much and loves that it's interchangeable meaning more play ways with it. 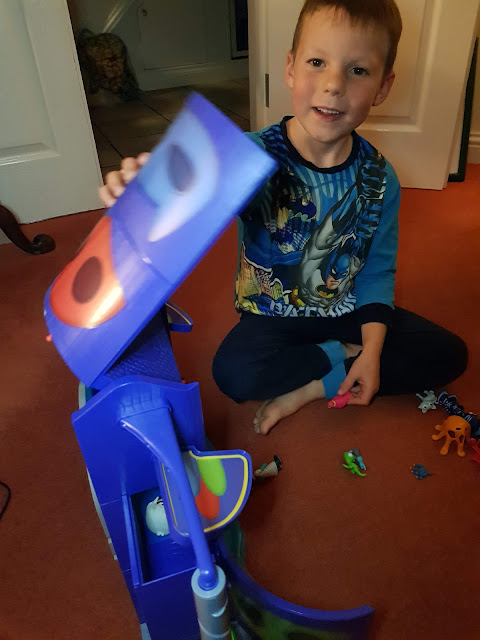 Considering the size of it, surprisingly it doesn't take up to much room, it tucks nicely away in Alfie's room and tidies away nicely. There is nothing that we didn't like, as I said it is already well played with, well worth the cost and is a definite on any PJ Masks fan Christmas list.

Readily available from all major toys stores and online including Amazon and Very. These are going to be very popular over the festive season so get prepared to go on a Super Moon Adventure! 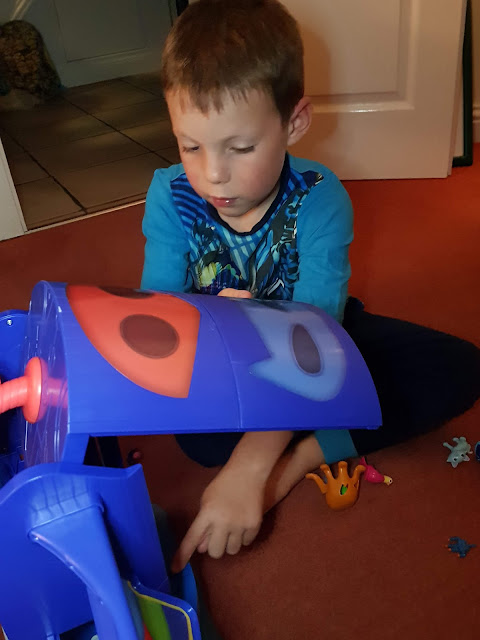 Remember to head over to Twitter to continue these celebrations with the fabulous and fun Twitter party happening with ukmums.tv on Wednesday 17th October 1-3pm so you must come and join uk for chatter, competitions and prizes! #PJMasksToys

* Please note we were kindly sent the items free of charge in exchange for an honest and unbiased review, thanks so much!
Posted by Helen - Blogging Beautifully at 8:00 am