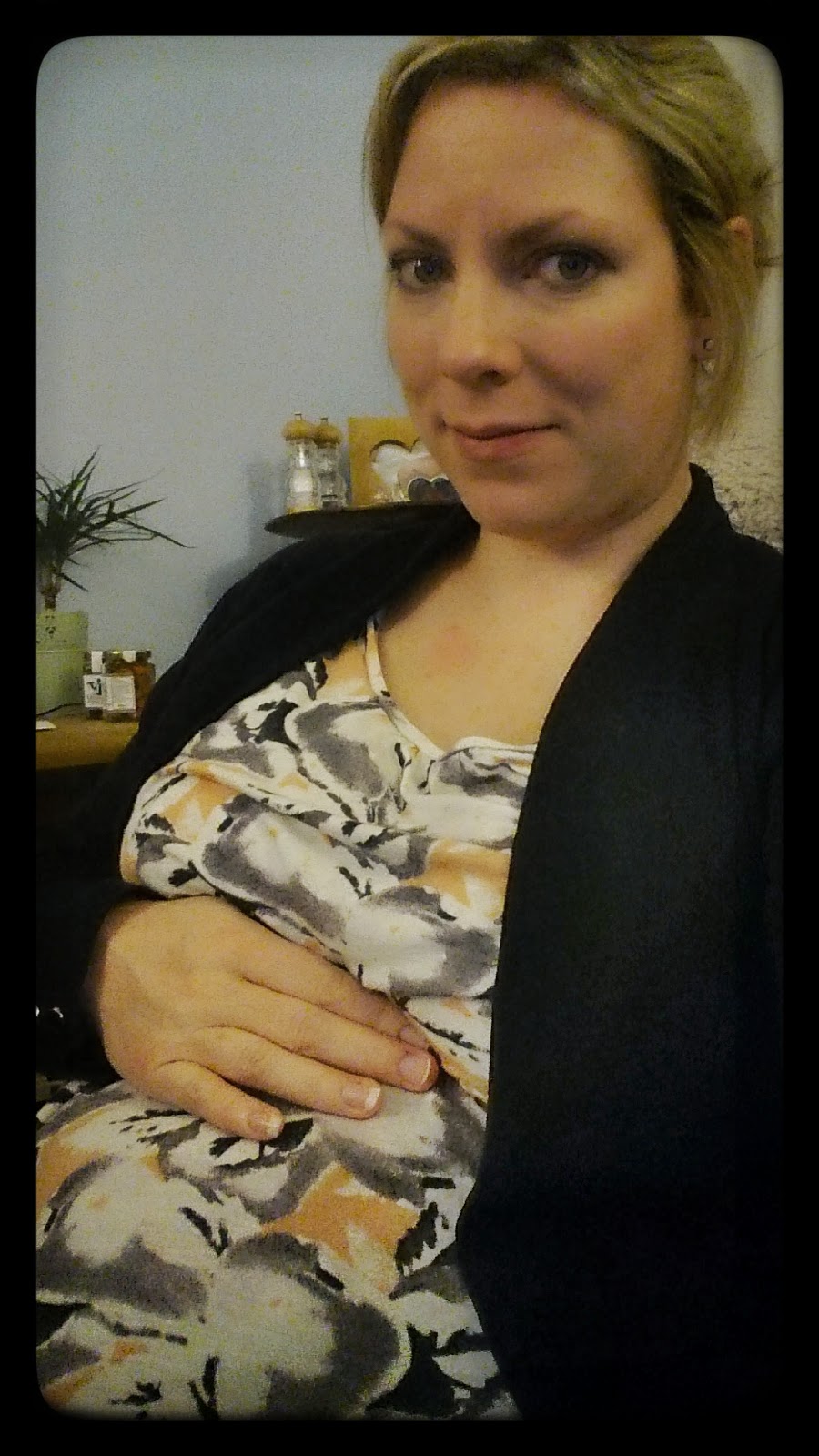 I is getting fat and I'm also very behind on my updates! Ooops. So I am now 32 weeks & 1 day, my last update was at 27 weeks which you can read here. Time is flying and with now just eight weeks to go till due date it's definitely true that subsequent pregnancies go alot quicker. I've now entered the third and final trimester of my pregnancy and with that comes a whole load more different symptoms.

Over the last few weeks I have become increasingly more dizzy during the day, it was quite worrying when it started as it came on so suddenly while I was driving around, not good. The dizziness eventually made me take some time off work and visit my GP who diagnosed me with having low blood pressure which is causing the dizzy spells. For a little more information click here, it explains a bit more about dizzy spells and fainting during pregnancy which is quite common. Unfortunately due to the nature of my job as a Community Nurse (I drive around and visit house bound patients), the Dr signed me off for three weeks for my own safety more than anything, but warned me that the dizzy spells are likely to carry on until I have the baby and just to try and take it easy and look after myself. I am hoping to make it back to work at the end of the month before I am officially on maternity leave as I am missing my colleagues, my job and the patients! I am also feeling incredibly guilty being off as I know what stress and pressure my colleagues are under at the moment. In my first pregnancy I felt really well at this stage so feeling a bit useless and rubbish is new to me! So if any of my lovely work colleagues are reading this, I'm so sorry girls, I miss you and hope to be back with you soon!

I continue to get braxton hicks but rather infrequently and noticeably less than last time but when I do get them I feel like they are more intense than previously. I'm starting to get more lower back pain as I am growing bigger but this is easily managed by avoiding being on my feet for long periods of time. Although I am trying to remain quite active by walking and doing the housework but I confess not a lot of strenuous activity at this point. My acid indigestion and reflux is starting to ramp up a bit now although currently not as bad when I was pregnant with Alfie but still bad enough for me to be popping Rennie's like they are sweets.

My weight gain to this day is around 6lbs, not the average amount that would be put on usually at this stage, but I seem to be the exception to the rule as with my first pregnancy I ended up losing a load of weight (around 2 stone)! As each pregnancy is different I was interested to know if this time would be dissimilar and although I did lose weight at the beginning I am now slowly putting on a bit of baby weight.

I have started to become (slightly) more organised and we have now moved Alfie into his new room with his big boy bed, this hasn't been as horrendous as we imagined although we are having to adjust to some slightly earlier starts and erratic bedtime's but all in all it's going ok, I will be writing more about this in a separate post. I have sorted out all of Alfie's clothes and managed to salvage some neutral clothes that can be used again and organised the nursery putting away new babygro's and various other bits and pieces. I am still yet to pack my hospital bag, I haven't really given it a massive amount of thought to be honest. Considering I was 10 days overdue with Alfie I'm not in a huge rush as I think I'll go overdue again.

Baby is weighing roughly around 1.5kg (around 3lbs) now and measuring an impressive 41cm long, the arms, legs and body are starting to plump up nicely now too! Last Sunday I had a 4d scan and the Sonographer's estimate at the moment for me is baby is nearly 4lbs and if continuing on this rate of growth I should be in for another 7lber which is not a bad weight. Unfortunately, even after a 20 minute walk and a bit of jiggling this little tinker didn't really want to behave and spent the majority of time with hands in front of her face so the pictures that we did get weren't as good as I was hoping but never the less gives a little insight into what SHE is starting to look like! I don't think I have shared the gender on here yet but I was over the moon to find out that we are having a little girl to add to the brood, very exciting for me since I am about as girly as girly can get and I can buy lots of PINK things :-)

Previously the midwife thought that baby was breech (feet down) but the scan has shown that baby has moved and is now head down, that explains the feeling of having a foot in my rib most of the time! 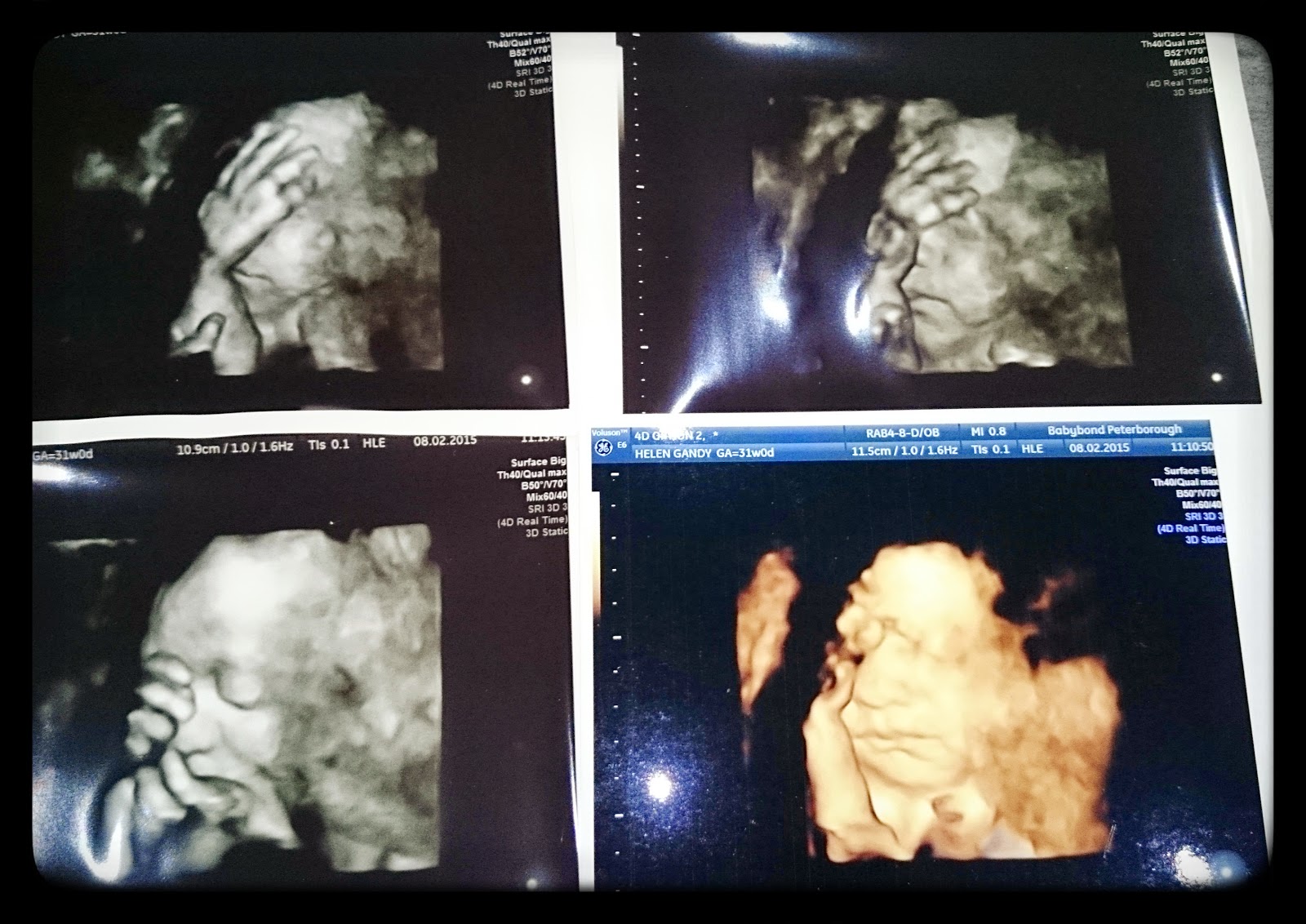 I will try and update again soon, while I am off work between looking after Alfie and trying to take it easy I'm taking the opportunity to blog a bit more so another update should be up soon. 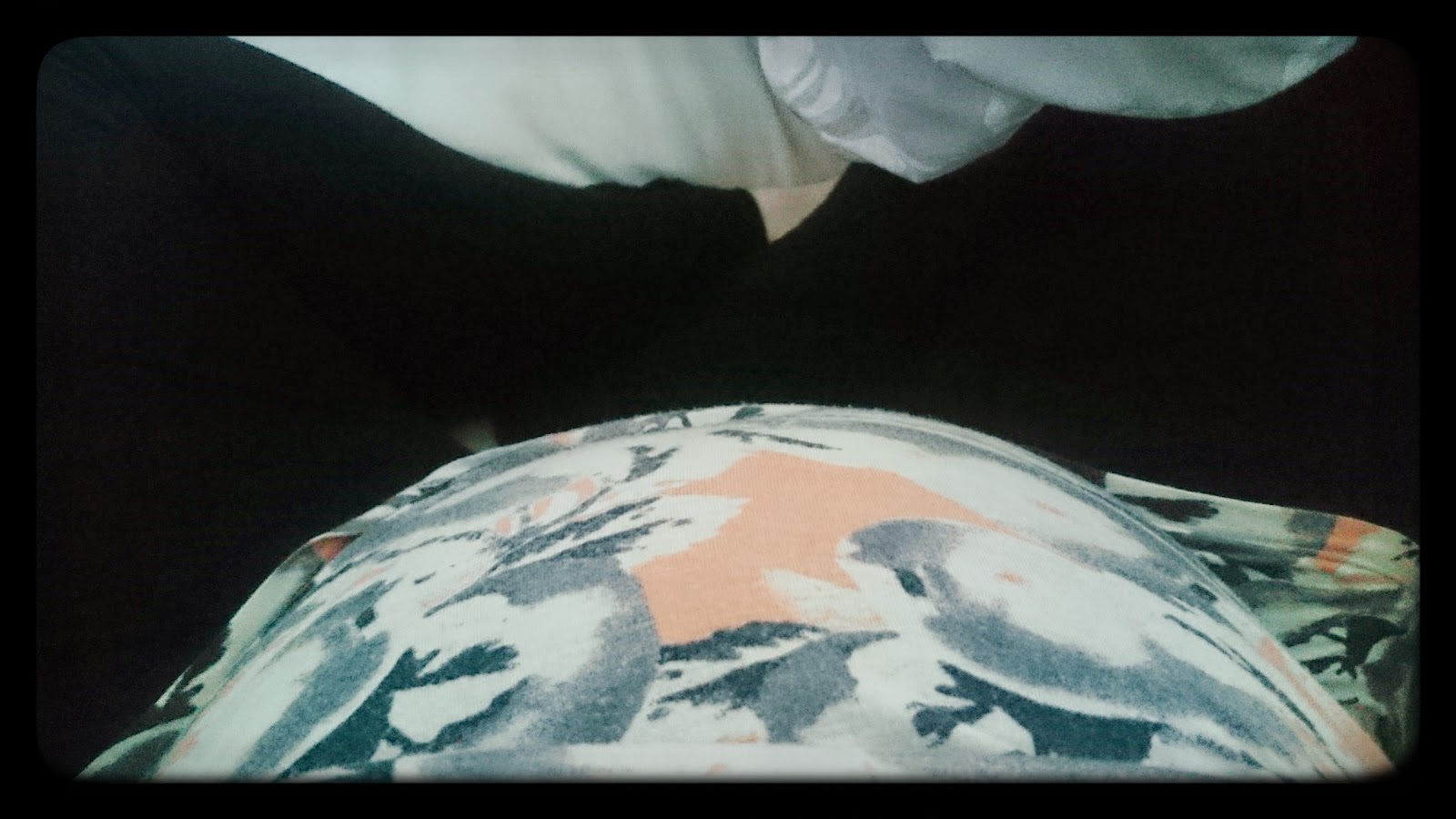 Posted by Helen - Blogging Beautifully at 9:51 am