I have a fear of spiders. I flipping hate them. I also hate people saying 'ohh they're more scared of you'. That may be the case but guess what, still not a fan! If there's one in the house it's either a case of shouting for my husband (although he hates them too) or trying to get rid of it some how, dare I admit that sometimes the hoover comes to my rescue. Usually my very gallant husband gets a glass and a bit of paper and chucks them that way, as much as he hates them he's braver than me. I hate the thought of having to get so close to them to trap them under a glass! I have no real reason to be fearful of spiders, it's just one of those irrational fears that I've had since I was very little. I'm always on the lookout for help with catching spiders and bugs but have yet to be successful. However, there may be a solution.......

I want to introduce you to the spider catcher by Brainstorm Toys (RRP £9.99), could this be the solution to all my spider catching problems? Is it going to help my house become spider free? Is it going to make me braver around spiders? Well, kind of.

At 65cm long it enables you to approach a spider (or moth, butterfly or bug) at a safe length and catch it without harming the little critter. The bristles are soft and gentle closing the critter in safely so you can transport it as far away from the house as you desire! The catcher comes with a plastic cap to cover the bristles and a handy hook to hang it from the wall. It also comes with a rather realistic plastic spider to practice on, errghh! 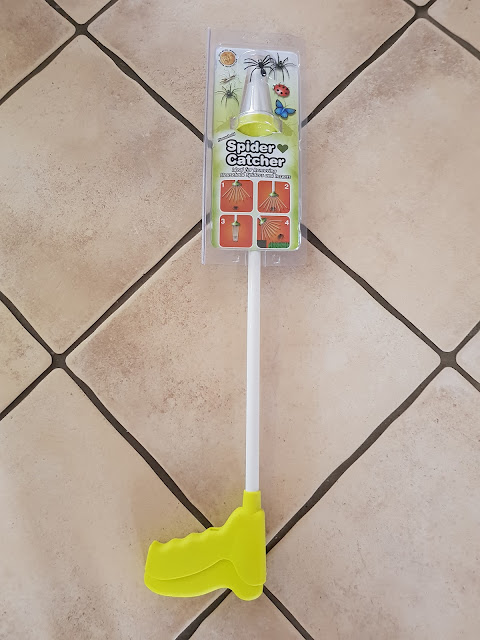 So how have we found the spider catcher?

Well, I've used it a couple of times on some fairly large spiders. I have to admit that it's taken me a while to get the guts to try and use it, even though it is fairly long I still feel I am way too close to the spider itself when trying to catch it! I'm also uber paranoid about the flipping thing running off while I'm trying to build up the courage to actually use the catcher! However, I have sort of overcome this and had a couple of successful catches and releases. It is handy to know that I can now use this rather than having to rely on my husband (or the cat) to try and get rid of the eight legged creatures. It's very easy to operate by using the trigger to open the bristles and then releasing it to close them again gently around the spider or bug. I have found it works better on the floor than in the corner of a room, I tried to capture one in the corner of the ceiling but I clearly need more practice at this....... perhaps I just haven't got the hang of it quite yet. 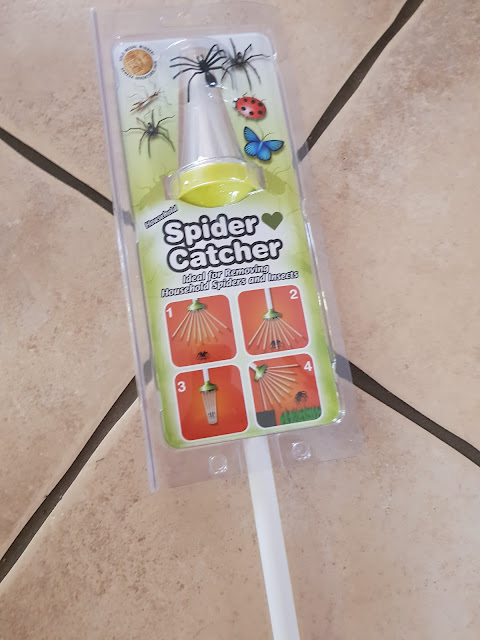 Overall, I'm pretty pleased we have this in our house. It's a great invention and if you're pretty wimpy around spiders (like me) then this could be the answer to your prayers! Although I feel it could be a bit longer in length, with more spider catching practice (although I don't want them to suddenly all reside in my house) I feel I'll be more confident using it and catching the 8 legged creepy crawlies. Available from many a retailer for the very reasonable sum of £9.99.

Have you got a spider catcher? What do you think of it?

* Please note we were kindly sent a spider catcher in exchange for an honest review, all thoughts and opinions are my own.
Posted by Helen - Blogging Beautifully at 12:40 pm