The Wonderful World of Disney on Ice *Review*

Ad {gifted experience}
We are huge Disney fans, well I say a collective 'we' but it is mostly myself and Elarna! There is nothing we like more than cuddling up on the sofa together watching Beauty and the Beast, Frozen or Moana....to name but a few! Back in November I treated us all to tickets to our first Disney on Ice show which we absolutely loved and as soon as it had finished I was already waiting for the next show to be announced! In a stroke of fate we were very kindly offered tickets to the Spring show that is currently touring, this particular tour is called The Wonderful World of Disney on Ice and I actually managed to keep it secret from the kids until about a week before we went so the excitement was very much there on the day. I do have to apologise for the quality of some of the images it was really hard to get decent images in certain lights on my phone! 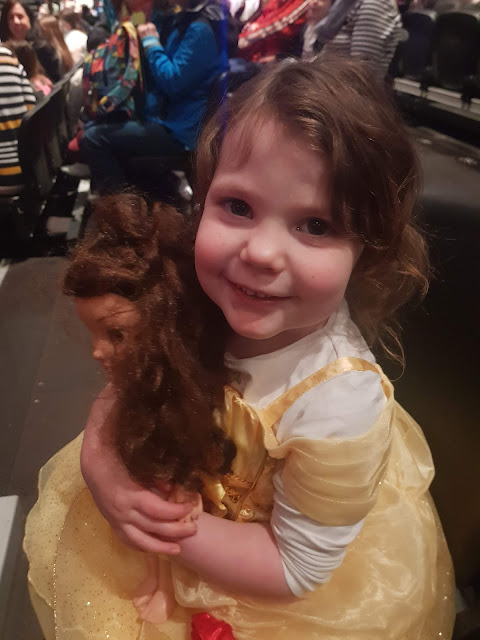 The previous show we went to was in Nottingham at the Ice Arena, however this show was at the NEC in Birmingham, I believe they don't always go to the same arena's, however if I am totally honest we much preferred Nottingham as a venue, much less stressful and far more organised but this is no reflection on Disney on Ice but the venue itself. There is loads of merchandise on sale with varying prices but we didn't purchase anything at this show. However I did remember to take the slush cups that I had purchased at the previous show and brilliantly we were able to get these filled free of charge which was fantastic.

Elarna was ridiculously excited for the show and Alfie was much more excited for this show as making an appearance was The Lion King, Nemo and Toy Story. We had great seats overlooking the ice and once seated we could not wait for the show to start. 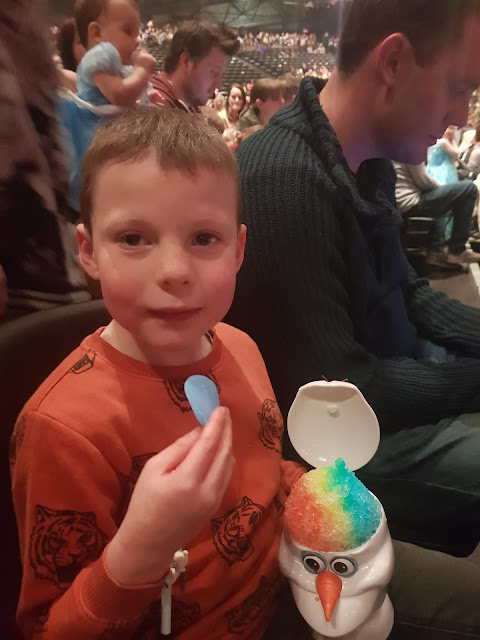 We started off with meeting Mickey and Minnie to introduce the show and whip the crowd into a frenzy. It was clear from the audience that everyone was so excited for the show to start. We have the promise of lots of our Disney friends will be making appearances. 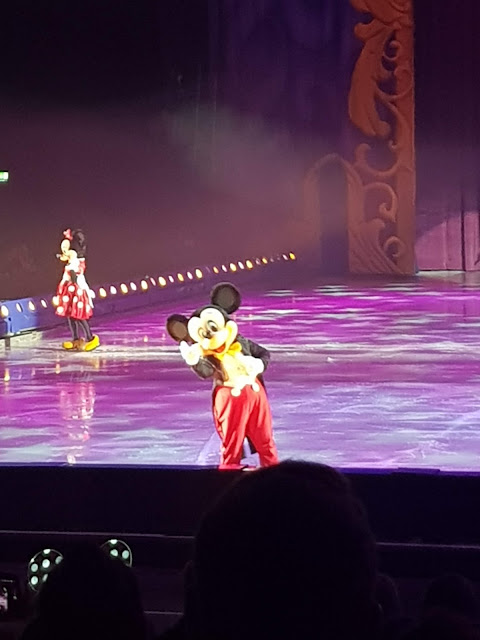 The Pride Lands were our next stop, Alfie was absolutely delighted at this as he loves The Lion King, it is one of his favourite films. As soon as the recognisable music came on he was transfixed and clearly enjoyed it. This section was colourful, energetic and a great to start to the show. 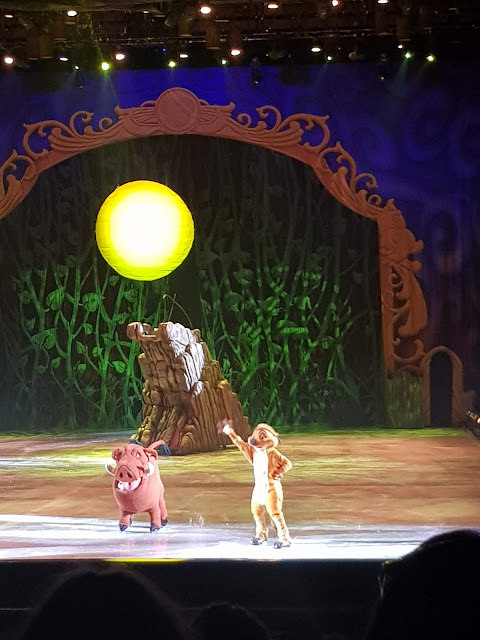 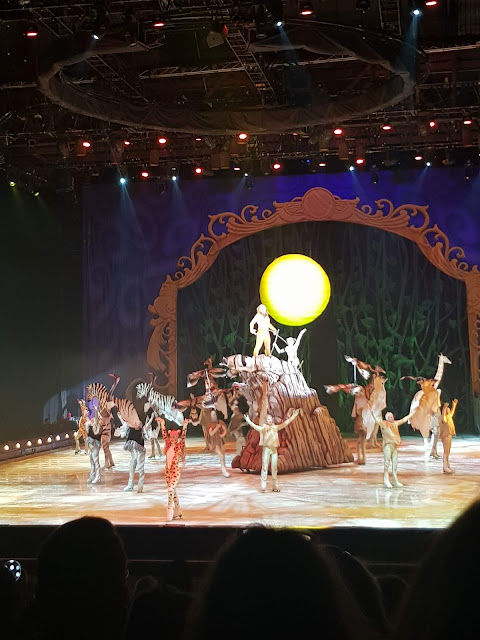 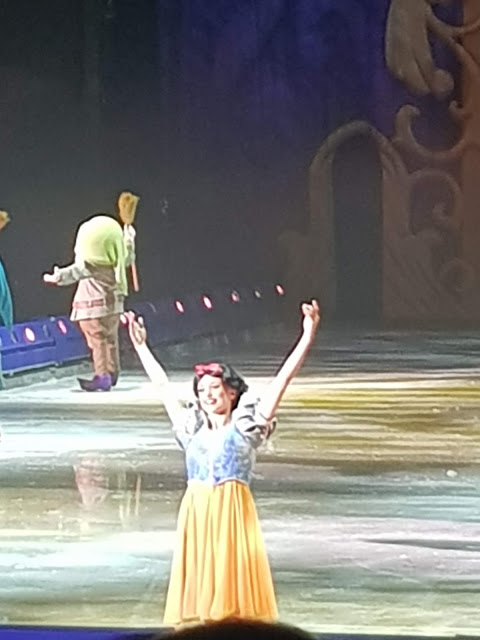 The show then continued with a vibrant and exuberant display full of energy from Aladdin and friends. Then we had a trip to the bottom of the ocean with Ariel and her sea creature buddies. I completely love The Little Mermaid so this part of the show I thoroughly enjoyed. The costumes and skating as well as the tricks were mesmerising. 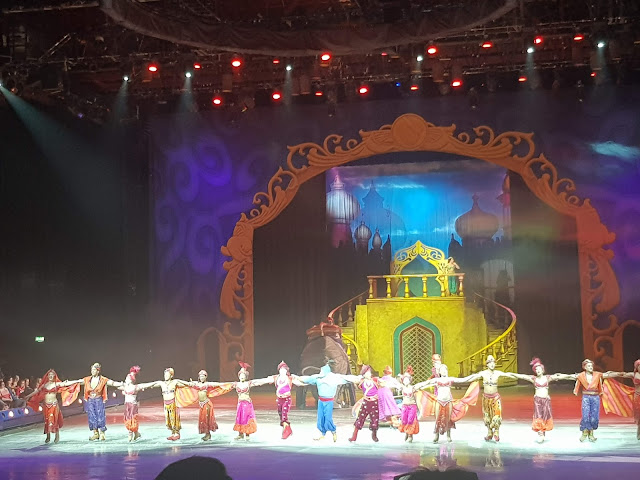 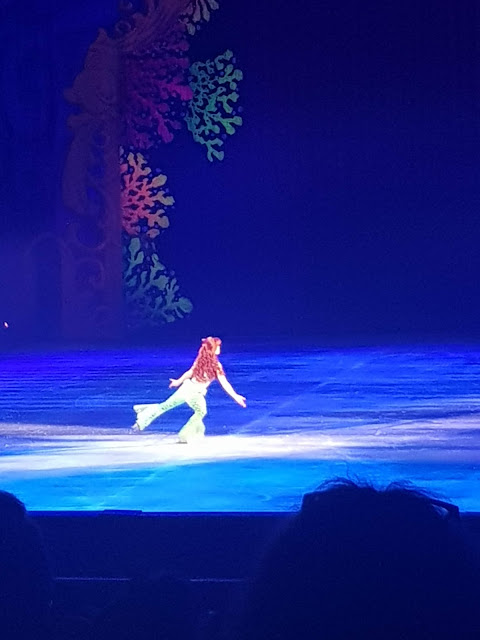 There was also an appearance from Rapunzel but I don't seem to have any pictures or remember if it was before or after the interval! Oops! We love Rapunzel aswell, never mind, it will be a surprise if you're booked to see the show. 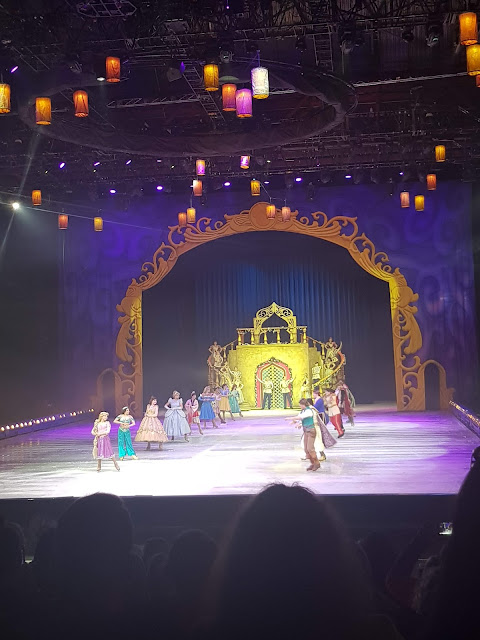 Just before the interval we had all the Princes and Princesses take to the ice for a fabulous show dance. Elarna was beside herself with seeing all her favourite's....although she was slightly disappointed that Moana didn't make an appearance at this show, and that she could see Mulan in the show dance but she didn't have her own section within the show. However, that's the wonderful world of Disney, there are so many characters that each show is going to have different characters and this is what keeps it fresh. 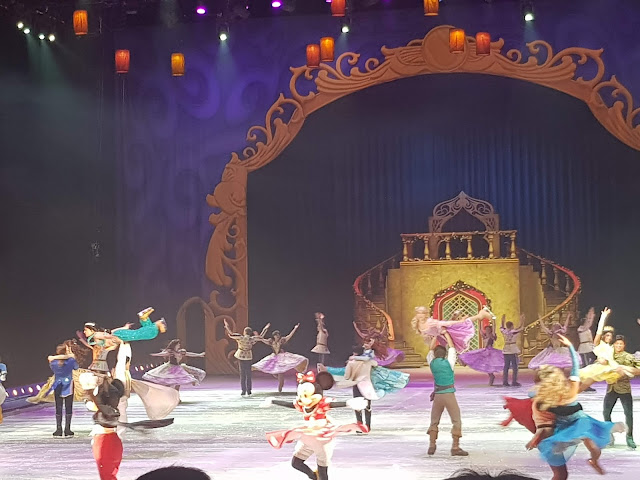 After the interval we said hello to Dory and her friends, ahhhh we love Nemo and Dory and this was a brilliant part of the show, the music isn't as well known but it was still a marvelous few minutes. We also had a bit of a cowboy dance with Woody and his mates but I sadly didn't have any decent pictures to share. It was super high energy and a real toe tapper, the kids loved it, especially the toy soldiers! 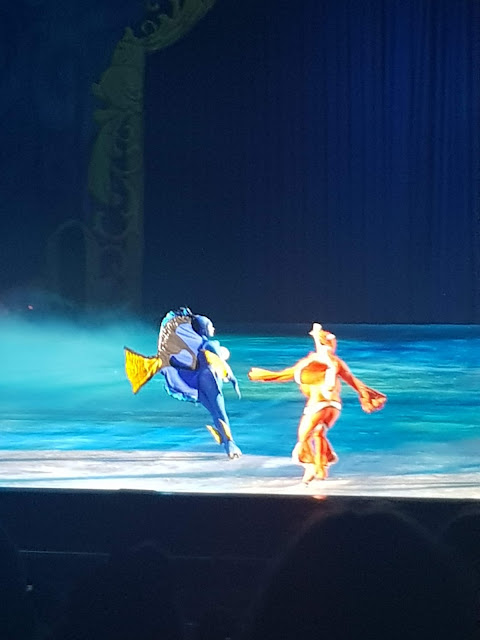 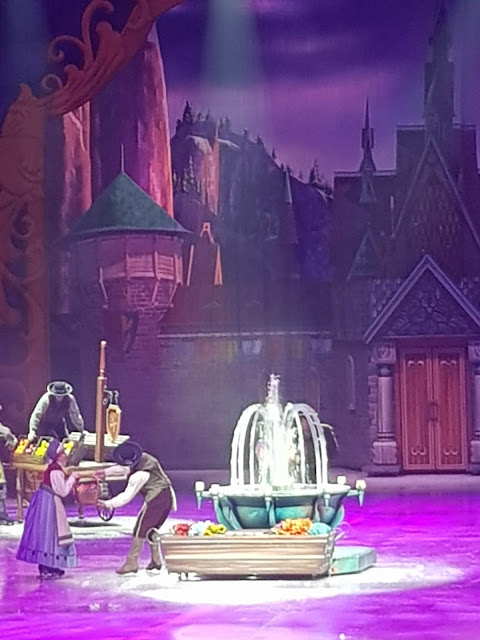 Finally, it was time to end with a spectacular visit to Arandel and see what Ana and Elsa were getting up to. I think for myself and Elarna this was what we were both looking forward to, we loved it back in November and it didn't disappoint once again. With real snow, lighting effects and drama this is an epic end to the show. I couldn't help but sing along! 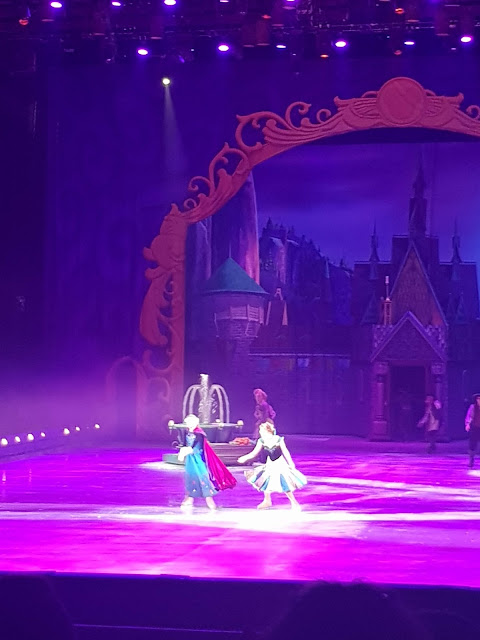 Not only did we have the show stopping songs from Ana and Elsa, Olaf also took centre stage with a gorgeous, bright and sunny routine that was a real feast for the eyes, it really puts it in perspective the amount of time, endurance and dedication these amazing performers must put into the show. 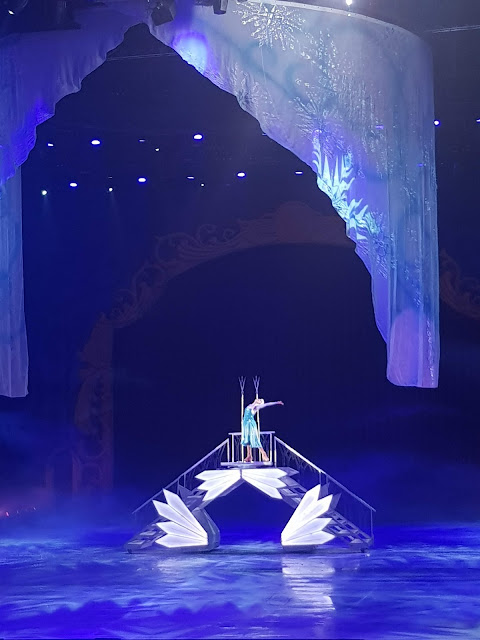 So overall, what did we love?

- All round family fun, you simply cannot beat a bit of Disney magic wherever you are

- Full of so many wonderful songs and dance routines, what is not to love

- Professional, slick and vibrant this is an unmissable show 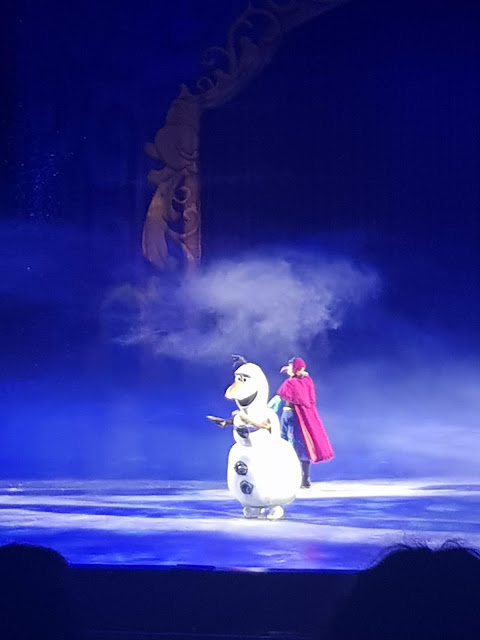 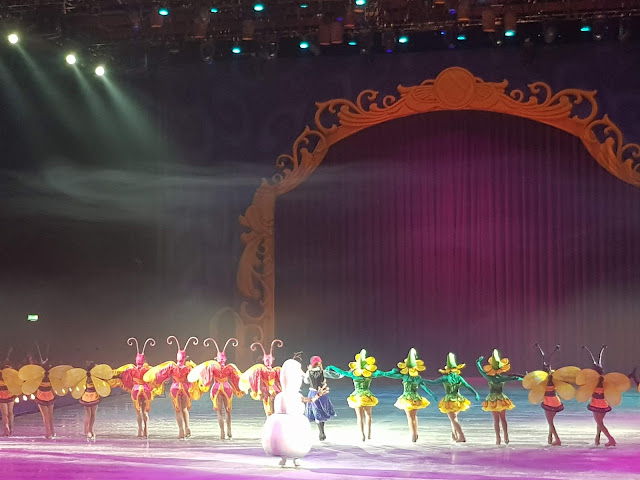 - The venue! The NEC we just felt let us down a bit, we paid for fast track parking but ended up parking in the wrong bit, then we had to queue for our tickets when we should have entered further up the queue, no reflection on the show itself more the venue but it wasn't a great start, we much preferred the Nottingham Ice Arena 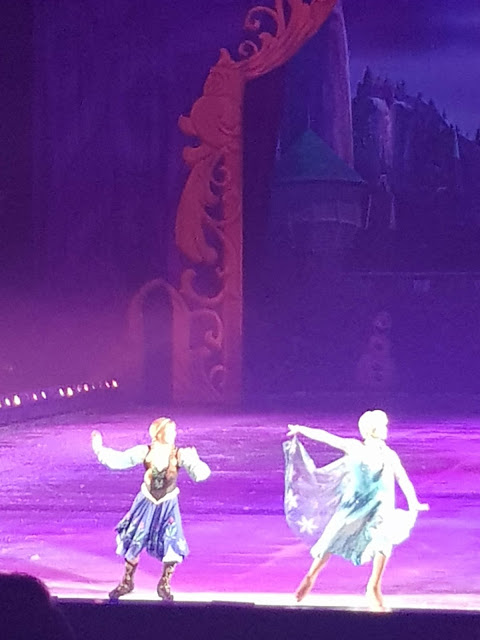 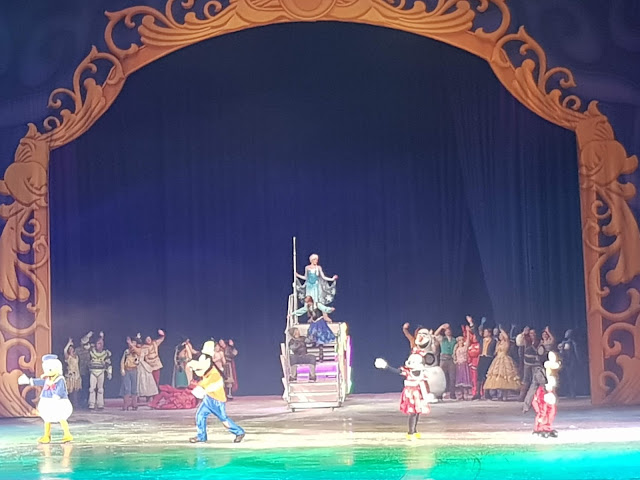 Overall, a fun filled family day out. We love Disney on Ice and can highly recommend if you're looking for a family trip out. The children adore it and looking around at all the kids faces in the audience it's clear to see they are in the happy place. I love that the show isn't too long, including the interval it's about 90 minutes which is perfect for small children to just keep the interest. There is plenty of surprises and different elements to entertain children and adults alike and we can't wait for the next Disney on Ice!

Just a final note, many of the children dress up, Alfie wasn't fussed but Elarna just her new Belle dress which is a Disney shop online purchase for anyone wondering, it's beautiful but sheds so much glitter......Daddy looked like a disco ball after having her on his knee for most of the show haha. 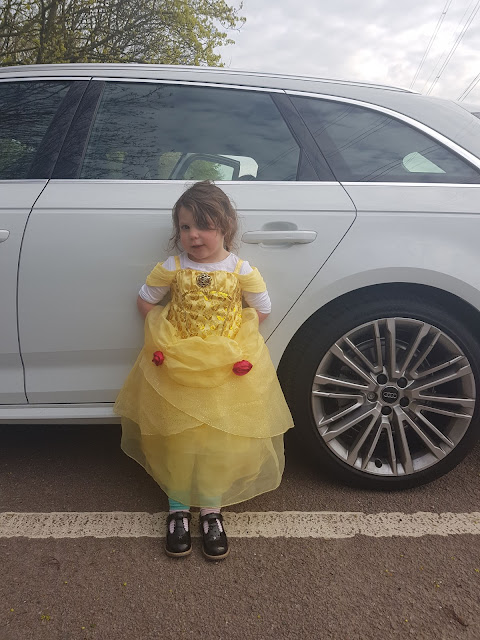 * Please note we were kindly gifted tickets for the experience, all thoughts and opinions are my own and I will always be truthful when it comes to reviewing. Thanks so much for the opportunity!
Posted by Helen - Blogging Beautifully at 12:30 pm