Wyevale looked fab when we arrived, it really draws you into the festive spirit with lots of pretend animals in wintery scenes and so many sparkly lights, it was a great start. We arrived in plenty of time to have a look around and maybe go to the grotto (which you pay for separately to the tea) if we had time. As well as the grotto and breakfast/tea option there was a huge snow globe and lots of photo props around which added to the festive feel. 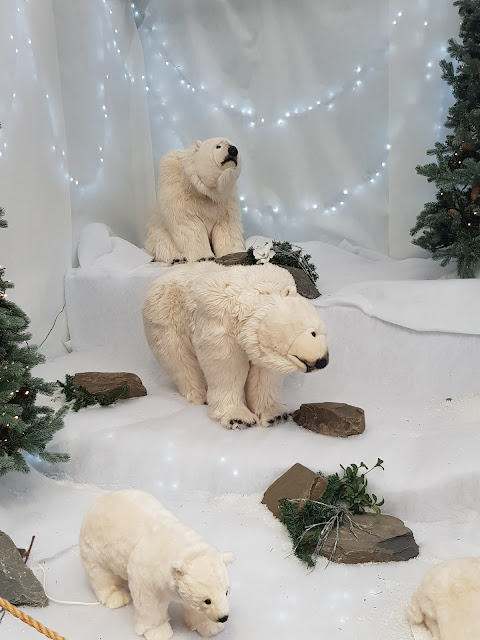 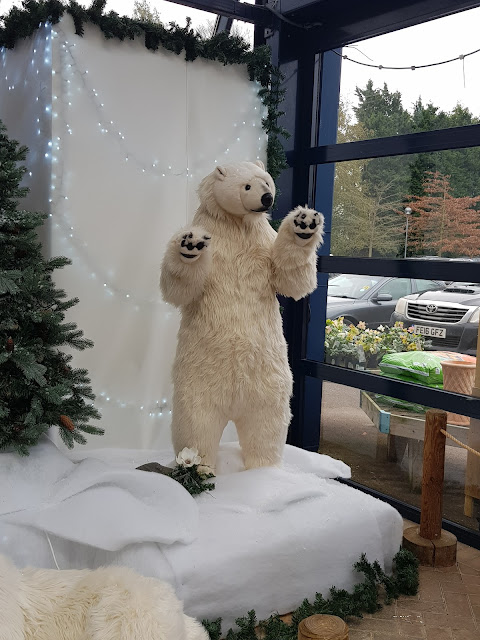 Sadly, we weren't able to make it into the grotto due to time constraints and because it was £8 per child we felt that as we had a Santa tea already booked we wouldn't need to do a grotto trip aswell. I think this is worth thinking about, either book one or the other otherwise it could get a little tricky explaining that one away! 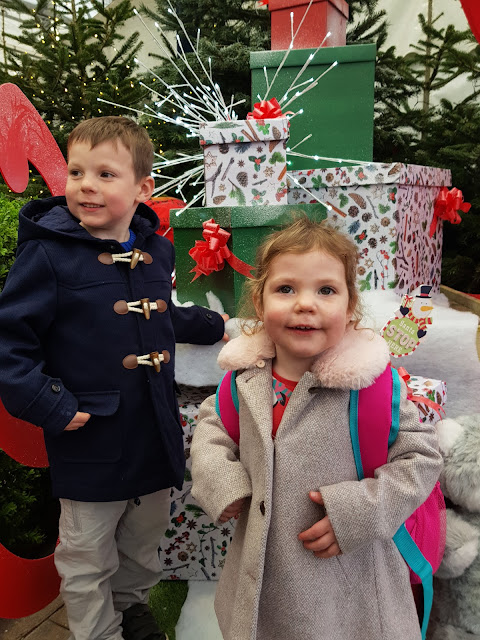 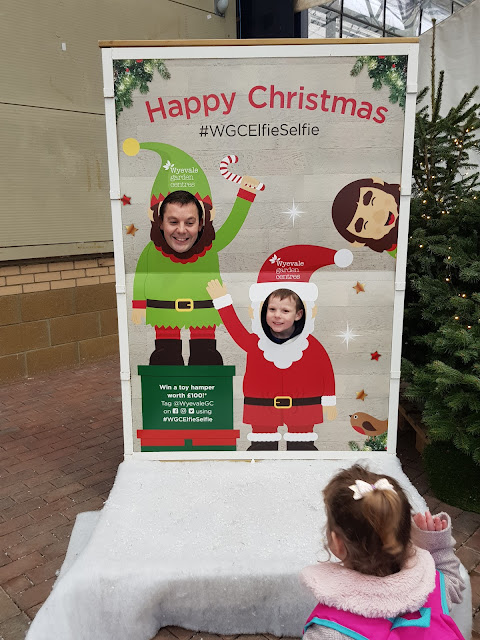 So we took the opportunity to have a few photos and a look around the garden centre, I didn't realise how big the Huntingdon Wyevale is, so much to look at so we managed to kill a good half an hour before making our way over to the cafe for our Santa afternoon tea. 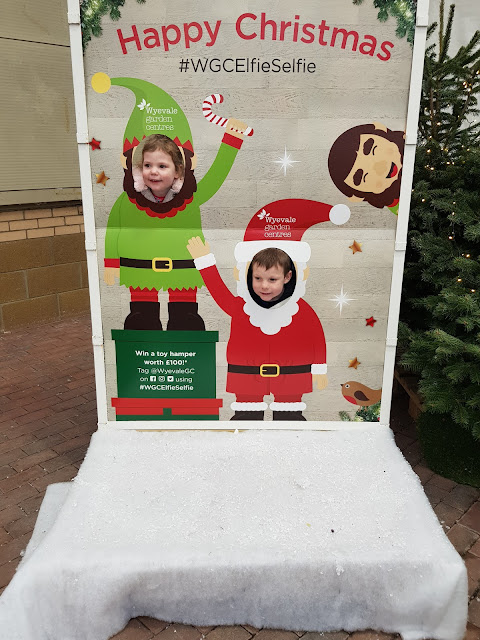 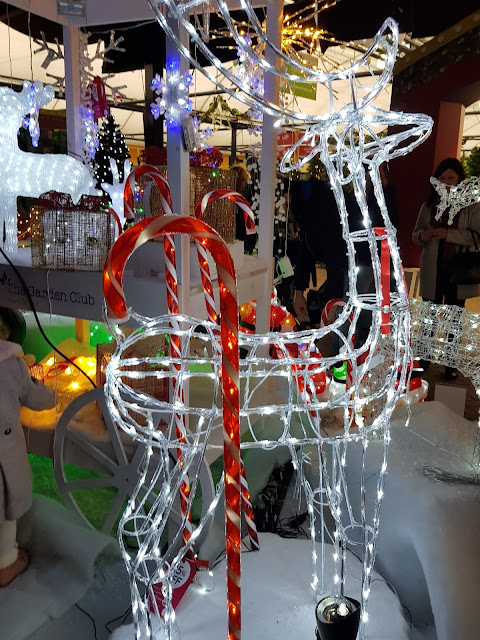 We were greeted by the very friendly Mother Christmas and shown to our table. What I liked is that there was only a handful of other families so it didn't feel overly busy, the cafe was also fairly quiet at this point so that was also nice. However the area where the tea takes place was situated right next to the small, indoor soft play and trying to explain to a 5 and 2 year old that we haven't paid for it (yup, you read that right it's chargeable!) that we haven't paid for it was a bit of a challenge.

On our table were crackers, drawing sheets and crayons so we were able to distract the kids for a little while but the proceedings did seem to take quite some time. Mother Christmas kept wandering around and engaging in conversation but things didn't really seem to flow. We were sat waiting for an age wondering where the food (that had been pre-ordered) was going to arrive. This was not just us but all of the tables. 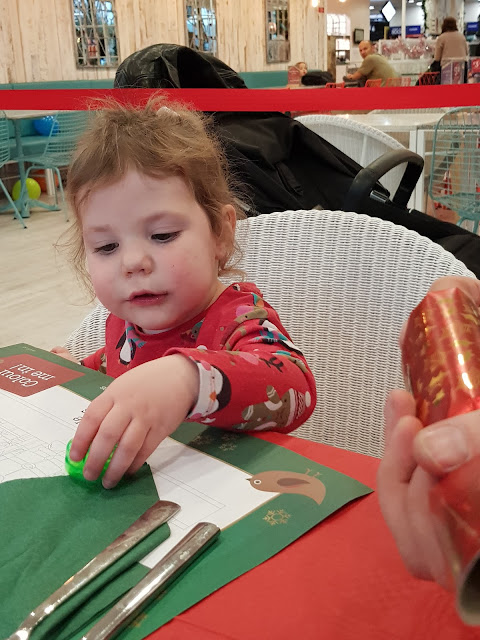 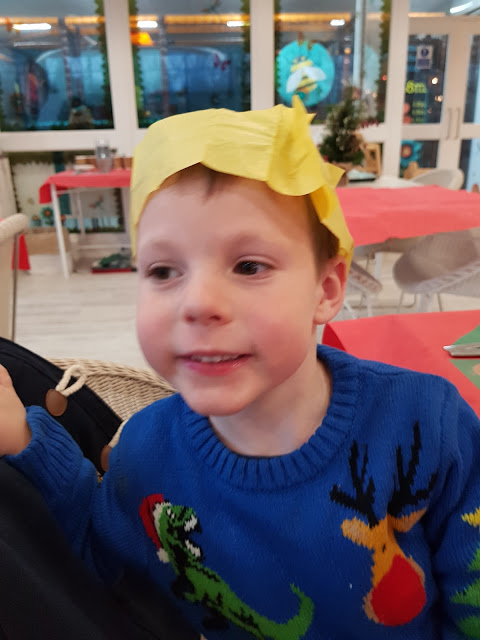 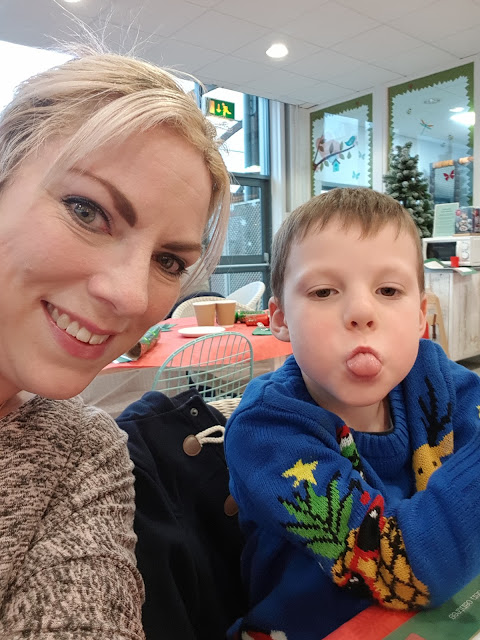 After a while we were approached by a very apologetic lady, a waitress I think to tell us that sausages we'd ordered had not arrived from their suppliers and we'd need to order another dish because of this, a little bit inconvenient but these things happen. 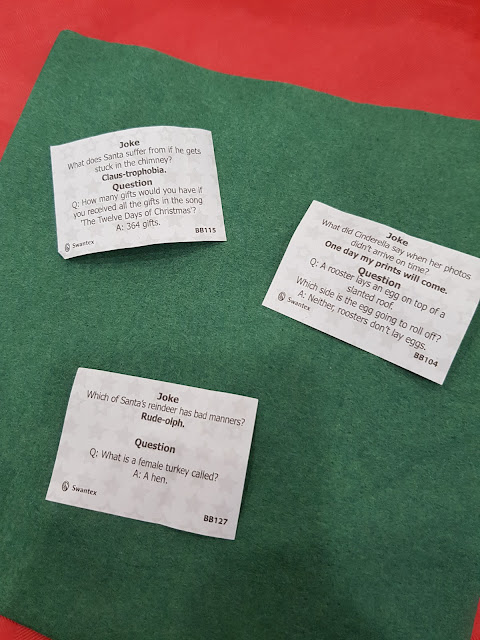 There was supposed to be the option of unlimited squash, however there was only water available and this wasn't on our tables so we had to reply on Mother Christmas and her helper to bring this around, there were a couple of times we did have to ask for a top up because the kids were so thirsty. The garden centre was also horribly hot, I mean stifling hot - even Alfie was complaining he was hot and he's normally not fussed by being warm. It was quite uncomfortable at times. 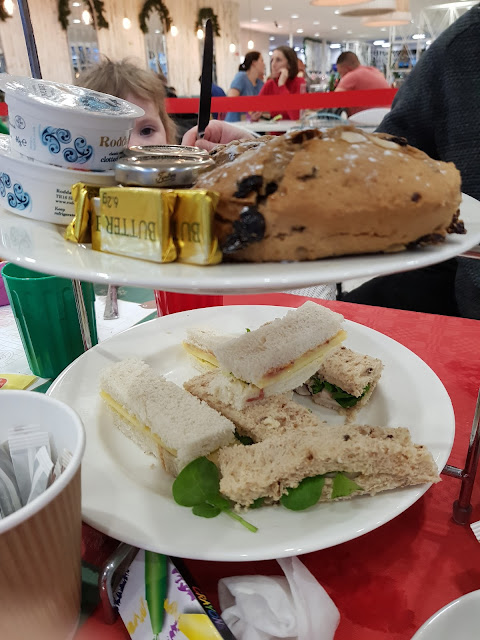 I know this is sounding horribly negative at the moment and I don't mean for it to be but I pride myself on writing honest reviews and it does get more positive I promise! 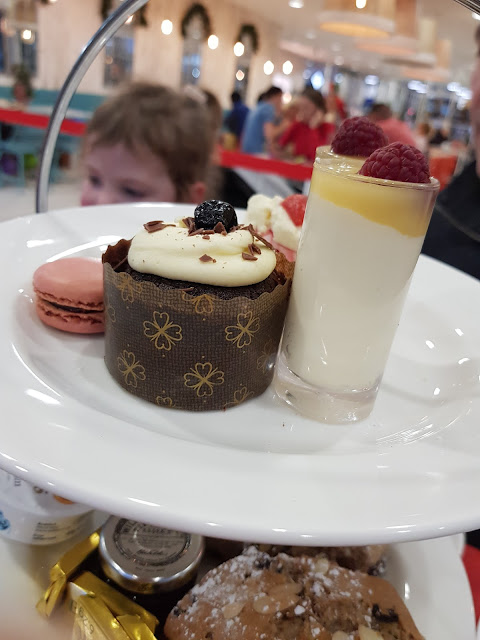 The kids food arrived and the portion sizes were massive!! Too much for the kids really but nice that there were generous. Myself and my husband were served a nice afternoon tea. The sandwiches were a little iffy and more would have been welcome, however the scones with jam and clotted cream were amazing!! The little cakes were also delicious.

After finishing the tea it was time for some gingerbread decorating. I loved this and so did the kids! They each got a gingerbread man (or should I be saying person if I'm being politically correct, ha!). We were also given a little pot full of sprinkles, choc buttons and marshmallows to decorate. The kids loved doing this and who can blame them! 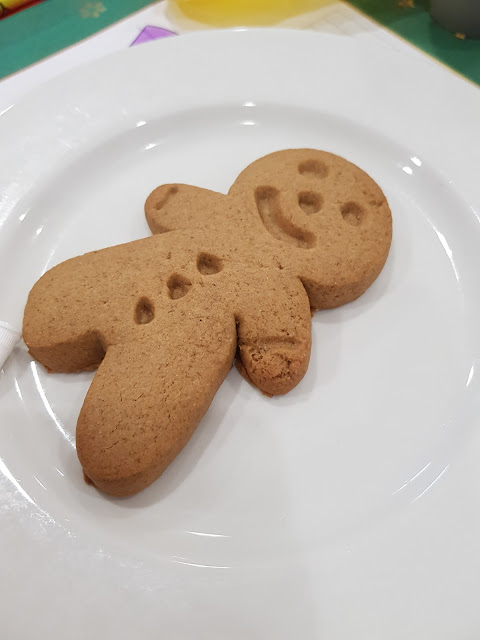 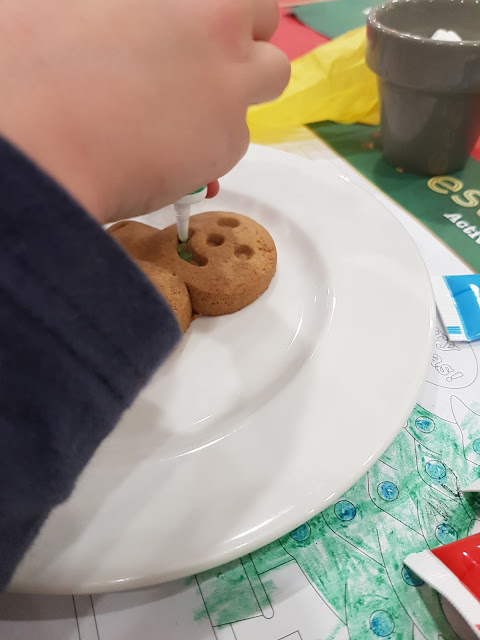 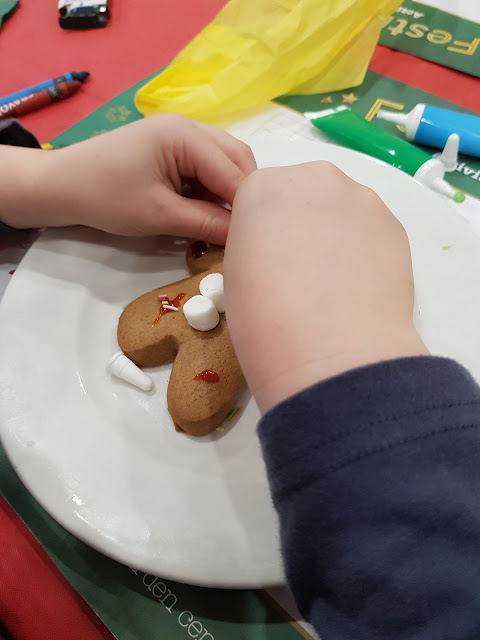 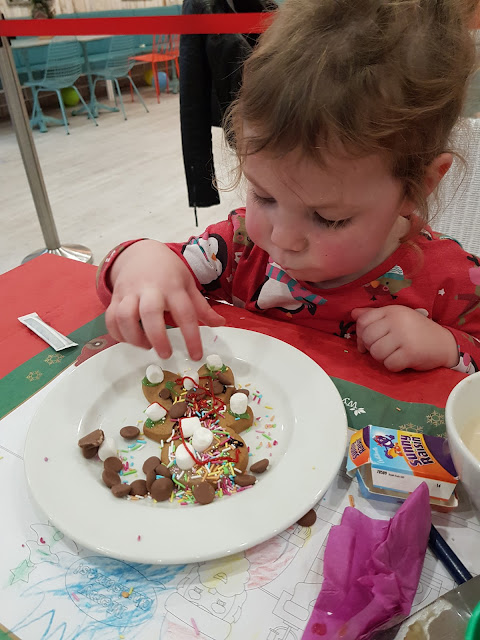 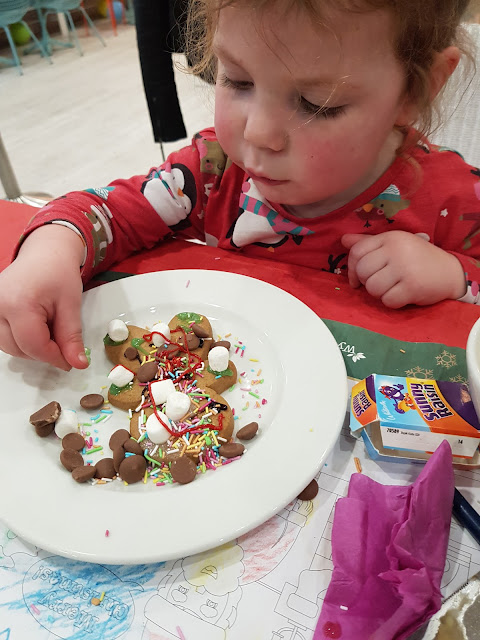 After gingerbread decorating it was time for a quick story - this is a lovely touch, really nice to get the children sitting on the floor and waiting for Santa. Finally, it was time to meet the man in red!! Oh my word the excitement from both my 2 when they saw him coming was something I'll keep in my memory for certain. Their little faces. Elarna especially as this is the first year she gets Christmas! 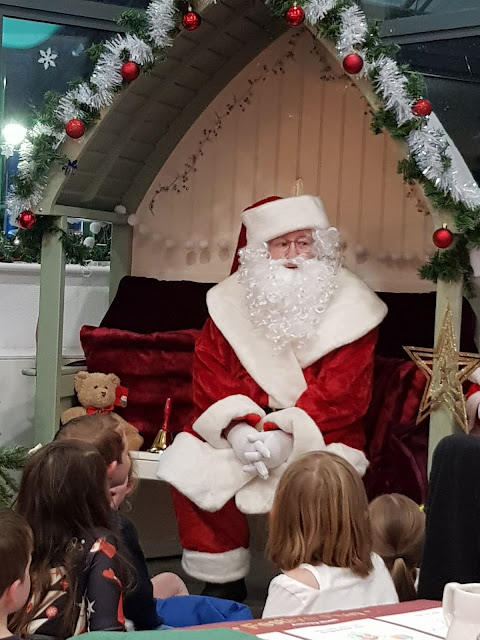 Santa was great, he was so engaging and chatty and he took time to speak to each child individually about have they been good, what would they like for Christmas etc, etc. He really was fab. My 2 were able to go and sit with him together which made for some lovely photos. Elarna had quite the chat with him, there was no shyness at all from her! Alfie was just captivated, as mentioned above it was truly lovely to see. 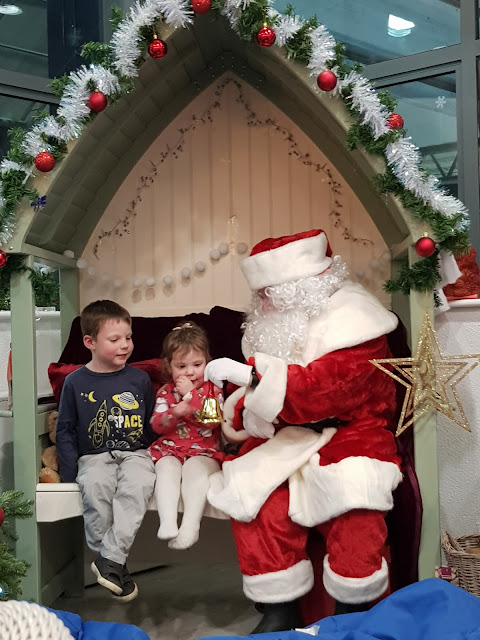 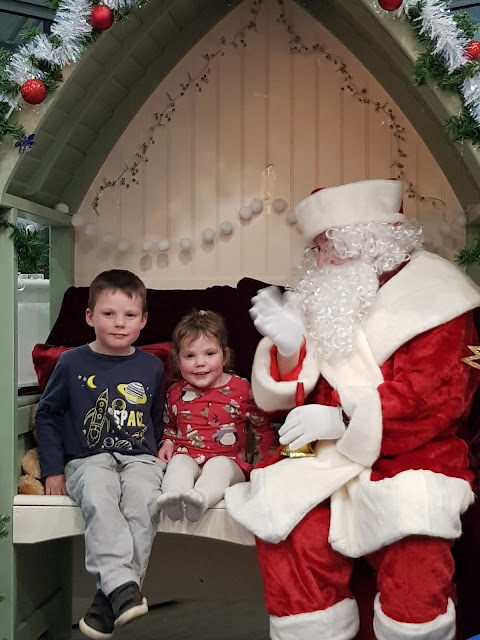 After having a chat to Santa is was time to pick a pressie. I really liked how the presents were picked by the child. A massive trolley was positioned to where we were all sitting, piled high with gifts. Although not wrapped I thought this was a fab idea to let the child pick their own gift, there was alot to choose from also from craft sets, cars, horses, soft toys amongst others. Apologies that there is  no photo of the trolley mine didn't come out very well. 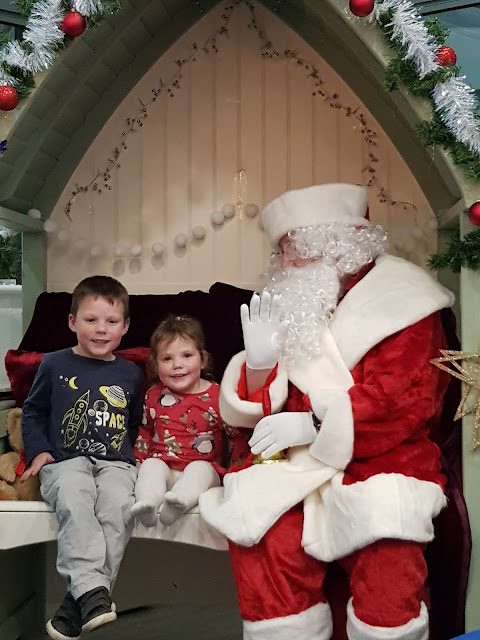 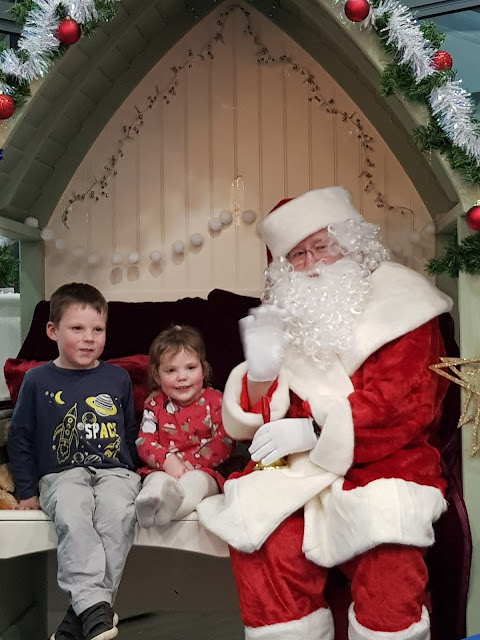 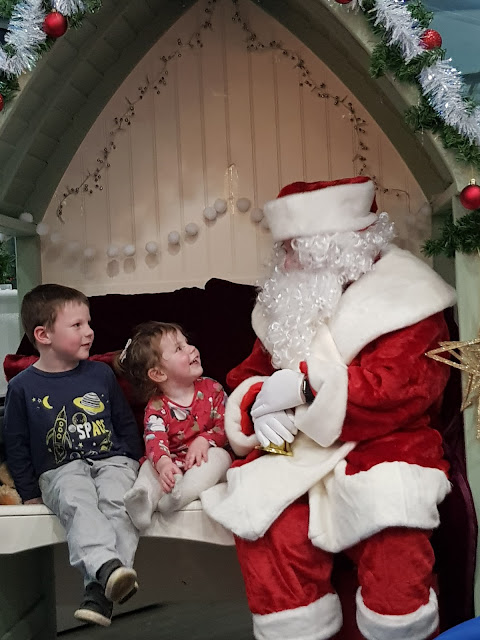 There really was no rush from Santa, he was more than happy to have a chat to the children and that speaks volumes (pardon the pun). It was great watching them interact with him. After the chat they went to the trolley and chose their gifts. Alfie, there was no real question about what he chose and he went for the racing car while Elarna chose a really nice craft box which was packed full of things! 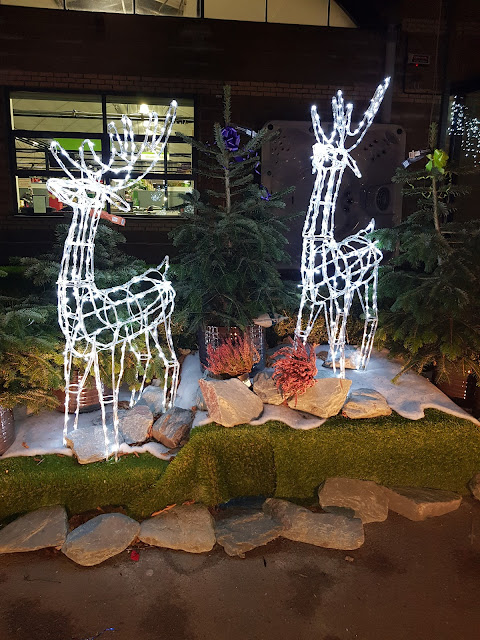 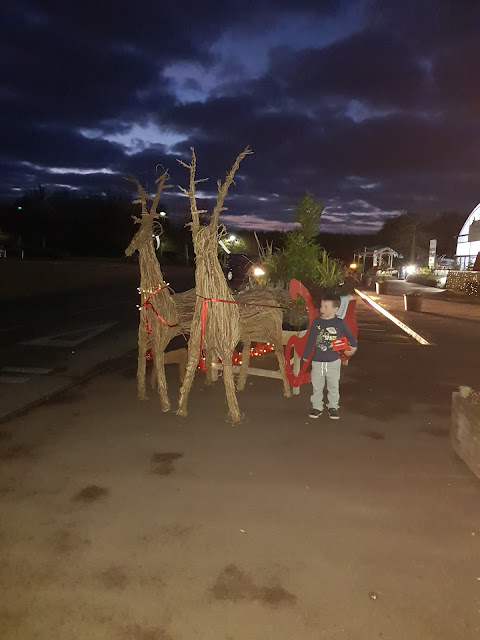 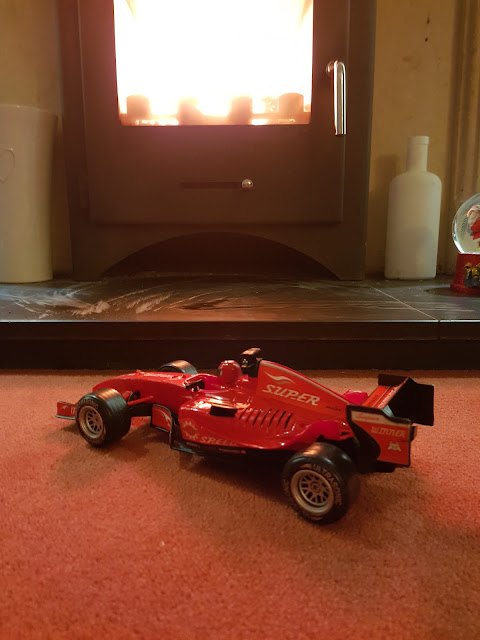 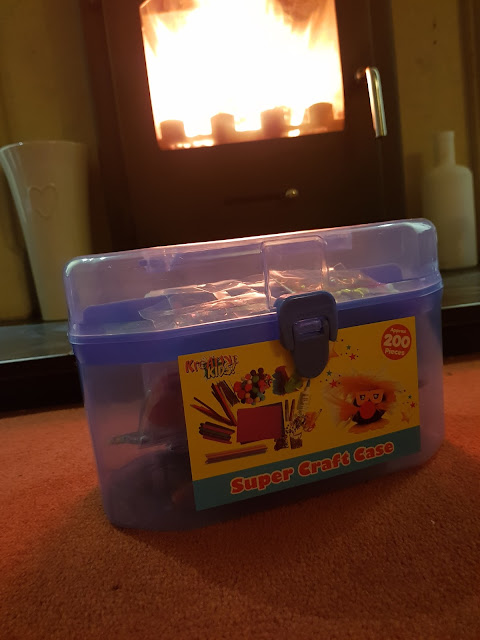 So, I know this has come across as a bit of a mixed review BUT did we enjoy it? In a word yes, it was a little rough around the edges but the concept it great and the kids really did love it and they were sooo happy to see Santa. Would we visit again? Yes I think so, trying the breakfast with Santa would be nice, I definitely wouldn't rule it out, for £36 in total it wasn't too bad and the memories we'll take away with us are always worth going to these type of things.

What do you think of this lovely, festive afternoon tea with Santa?

* Please note we were kindly offered the tea free of charge in exchange for an honest post. All thoughts and opinions are my own.
Posted by Helen - Blogging Beautifully at 6:00 am