This is the second part of my birth story from my previous labour, you can read the first part here.  I'll quickly recap, it was now Saturday morning on the 26th May 2012 and I had been in labour since Thursday evening, so a bloody long time! After pushing for quite some time and baby not making an appearance it was my husband that suggested for me to try standing up and squatting (how very glamorous I know!), so there I was bare bum hanging out of the gorgeous hospital gown I was wearing, squatting down like some sort of cave woman every time I had a contraction. I know this must conjure up a hellish image but at this point I truly didn't care what I looked like and who saw, I just wanted this baby out, NOW! I should mention that I didn't have any gas and air at this point, apparently they like to encourage you to not use it at this stage as it can hamper your focus to push baby out, I was horrified by this notion as at this point the gas and air was like my BFF, but hey I did what I was told and reluctantly handed it back. After a few pushes my midwife was telling me that she could see the head of the baby and I was finally starting to push him out, thank christ for that was all I could think at this point. I have to say my midwife was incredible and without her encouragement I truly don't think I would have got this far, after another few contractions I remember her saying that this baby was going to be coming out very soon. For some reason, I've no idea whether it was the slight pethidine induced haze topped up with gas and air state that I was in but between contractions I had the urge that I wanted to do my hair and makeup, I asked my husband to pass me my hairbrush and makeup and the look that crossed his face and the midwife's was purely classic, I think they thought I was joking but anyone who knows me will know that actually this is perfectly acceptable Helly behaviour! I remember my husband saying no and I said 'well at least pass my the bloody hairbrush as I look like a scarecrow!',  luckily for him he did see sense and pass me said hairbrush (good job he listened to my request, never ignore the requests of a lady in labour no matter how crazy they seem!).

The next few minutes happened in such a blur, I vaguely remember my midwife lying on the floor looking up and the student midwife also on the floor ready to help out, I remember being told to breathe as if I was blowing out a candle but my body just took over and in what seemed like an almighty contraction I gave a push and this thing,  my baby flew out at quite some speed!! My midwife was right there waiting to catch him, I remember thinking what the actual f*c* just happened? I was completely in shock at the whole concept that I had finally just given birth. I vividly remember the next few minutes, the midwife put our baby on the bed and Adi then cut the cord, he started to pink up but needed a little puff of oxygen just to help him out a bit, I remember saying over and over again, 'is it a boy?', 'is he ok?' and yes he was most definitely a boy and he was ok! This all happened within a few minutes, and Alfie made his entry into the world at 08:20 on the 26th May 2012.

Be prepared that what I'm writing about next is a little graphic and gory, slight warning for you there!

I was still standing up at this point, I can recollect looking down at the floor and thinking my god how much stuff comes out after you have a baby, not only did I have the placenta still attached but there seemed to be gallons of blood and other fluidy stuff on the floor (gross I know), I was quickly assisted back to bed and I remember saying 'have I torn?', I don't know what made me ask this I just had a feeling that something wasn't quite right.

I managed a quick cuddle with our little boy before he was given to Adi, we quickly made the decision to call him Alfie!  The next thing that was supposed to happen was for the placenta to be delivered, however as with the latter part of my labour this was not as simple as it should have been and it wouldn't come away, the midwife was tugging gently at it but it was stuck so the synto drip needed to be restarted to assist with this (great, just great!), eventually it did come away but I lost a bit more blood which they were concerned about. After this it was then time to assess the damage, I'm pretty sure it wasn't a pretty site down there, I suspect it resembled a bit of a war zone and I just had a feeling that I had torn quite badly, something which they don't show you on One Born Every Minute! After various people had come to look at my nether regions and poke and prod me about it was decided that I need to go to surgery for a repair job, wahhhh! I was told that because Alfie had come out quite quickly and had been back to back his head flexed backwards in the birth canal rather than his chin on his chest which is what had caused the tear, they were unable to assess just how bad it was until I was in surgery.

Anyway to cut a long story short I was quickly taken down to theatre and given a spinal anaesthetic to begin the repair job, I was drifting in and out of sleep during it so I don't remember much, thank god! 2 1/2 hours later I was in recovery, the operation took longer than expected due to me losing more blood during the surgery, I was then finally reunited with my little one for some much needed snuggles and bonding, we were then taken to the ward to spend the rest of the day and night. 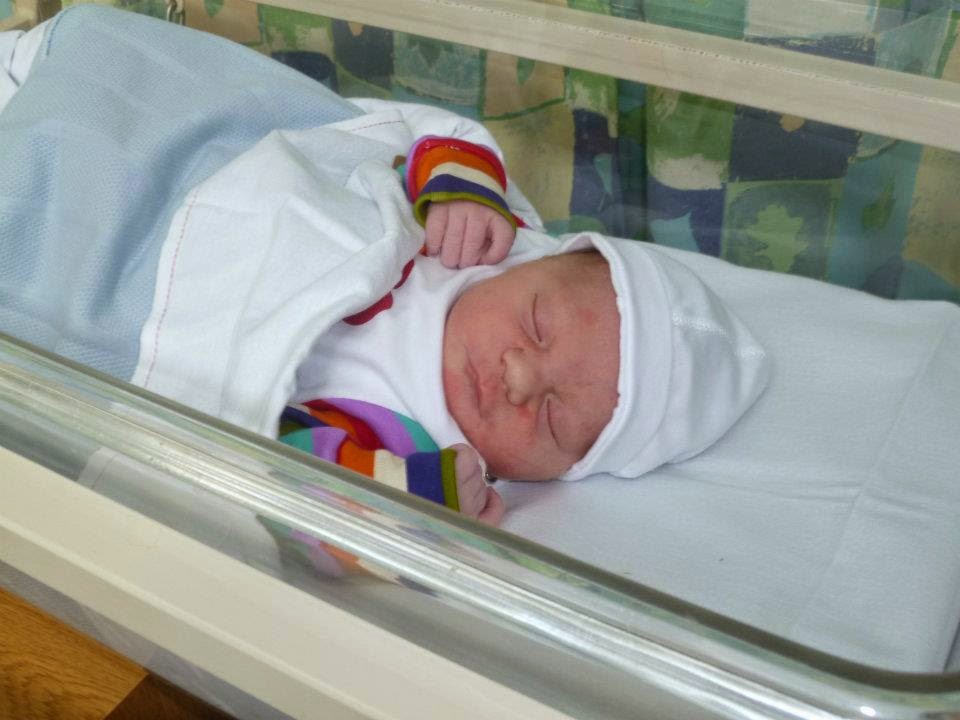 The hours seemed to blur into one, my Mum and Dad visited which was lovely but I only have vague recollections of it as I was so utterly knackered. It then came the time for them and Adi to leave and this was to be my first night alone in hospital with a baby that I had no clue what I was doing. After they left I stared and stared at Alfie for ages, I was just completely shell shocked and my emotions were playing havoc! The consultant came round to explain what had happened earlier in the surgery. I was told that I'd suffered a serious tear, a third degree tear to be precise (click link for more info). I don't want to go into much detail, far too traumatic for me still especially as I was told with these types of tears I could suffer with incontinence, I think being told that is what affected me most at the time, I struggled to get my head around what they were telling me! Not exactly the best news you want to hear after a 32+ hour labour, minimal interaction with your newborn and nobody around to cry on at this point.

The first night with Alfie passed with a mixture of me trying to sleep, breastfeed and settle a newborn, like I said above I had no idea what the hell I was doing and kind of just winged it, I think I eventually ended up sleeping propped up with him in my arms, not the best start!

I was allowed to go home on the Sunday and I couldn't wait, I just wanted to be at our own house in my own environment so I could start being a Mummy. I was discharged with a huge bag of pills and a sore and bruised foof and I think we had that first time parent clueless look as we left the hospital! 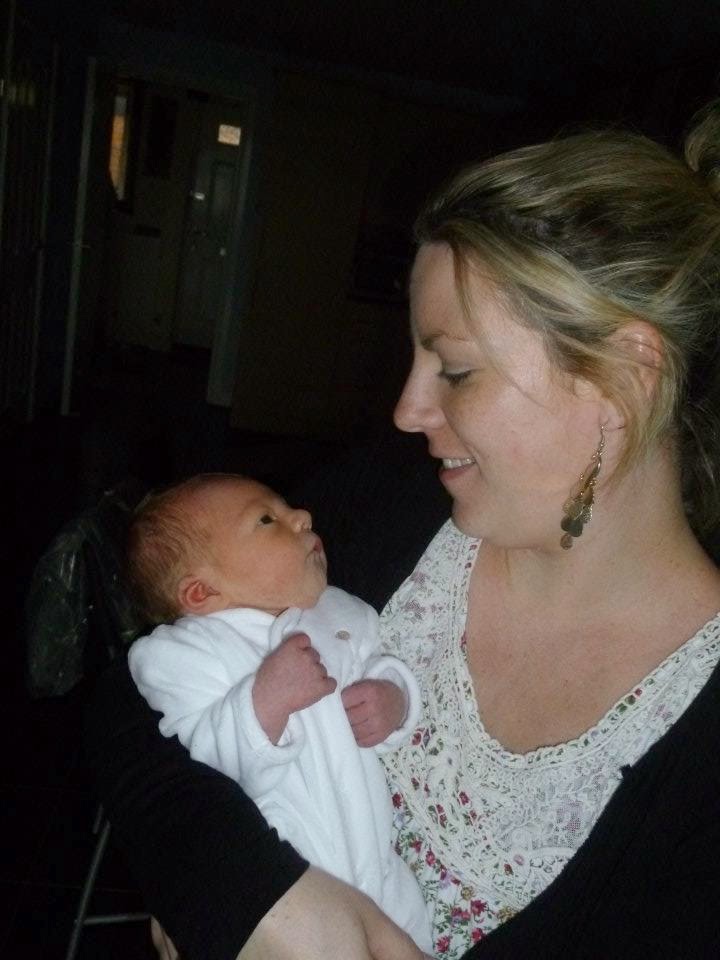 I continued to be quite traumatised over the next few days, on day four I succumbed to the baby blues, I was struggling to get Alfie latched on to breast feed, was so exhausted and couldn't get comfortable due to stitches etc, plus we were adjusting to the sleepless nights that come with a newborn.  I had a bit of a mini meltdown with Adi on the sofa and the tears just kept on coming, I sobbed my heart out but once I had released these emotions my god I felt so much better for it. I look back at pictures like the one above and although I look happy on the outside I felt that I was battling demons on the inside, I started to feel resentful towards Alfie about my damaged body and the fact that I was finding breastfeeding hard I kept thinking this isn't how it's supposed to be, it took a few firm words and encouragement from my amazing husband to get me back on track and actually begin to enjoy life as a Mummy.

To be truthful this is why I have been so anxious I have been harboring alot of demons I think with this pregnancy and the closer I get to my due date the more I am worrying.  I am dreading giving birth if I'm honest, it's not the contractions that bother me but the length of labour and risk of tearing again  and if I was to tear would the damage be then irreparable?

Due to my past labour I am consultant led this time which means it's likely to be a very medical delivery this time, although they haven't said I can't opt for a c-section the consultants are very eager for me to give birth vaginally again if possible, this is all well and good but it's not their bloody lady bits that they are having to consider! No matter how much I have asked will this happen again they reassure me that it is very unlikely but I still can't help feeling very nervous about giving birth again. I know that what I'm feeling is perfectly justifiable considering, so I'm trying to remain positive and hoping that this time I'll have a different birth experience. I feel I need to point out that actually I healed pretty quickly after surgery and was able to potter about and do bits and pieces around the house within a few days after having Alfie. I was also able to drive straightaway which was a huge help, I fortunately suffer from none of the side effects that I was warned about (thank god!) and 2 1/2 years later things are alright 'down there'!! So if you're reading this and have suffered a bad tear during labour, please let me reassure you that you will be fine and it will be ok in the long run. All I can say is thank god I did my pelvic floor exercises religiously!

I've got 10 weeks to go, 10 weeks to get my head in gear and start focusing and to try and remain positive, time will tell I guess and I hope to be sharing a positive birth story in April!

Posted by Helen - Blogging Beautifully at 11:02 am